The Premier League is one of the biggest league in Europe. The league offers some of the best teams in the world with amazing players, top managers and intense rivalries. Fans from around the globe tune into watch not only the exciting football but also the drama that ensues on and off the pitch.

With millions watching it becomes important for the players to put on a show every weekend and all the more important to look good while doing it. While the 2019/20 season is in limbo, let’s take a look and rank the beautiful craftsmanship of the kit designers for the season. 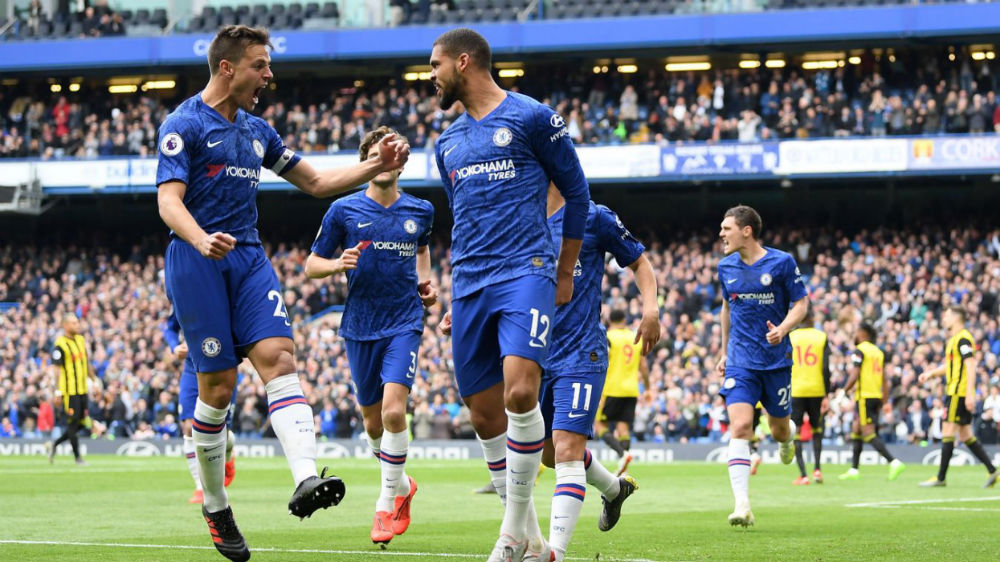 Chelsea’s Home Vapour Match Shirt is one of the best Blues kit in recent history. The iconic blue is accompanied by darker patterns which makes it stands out from the other home kits they have had in recent years. It is a new yet familiar look for a club which is going in a new direction under the new yet familiar manager. 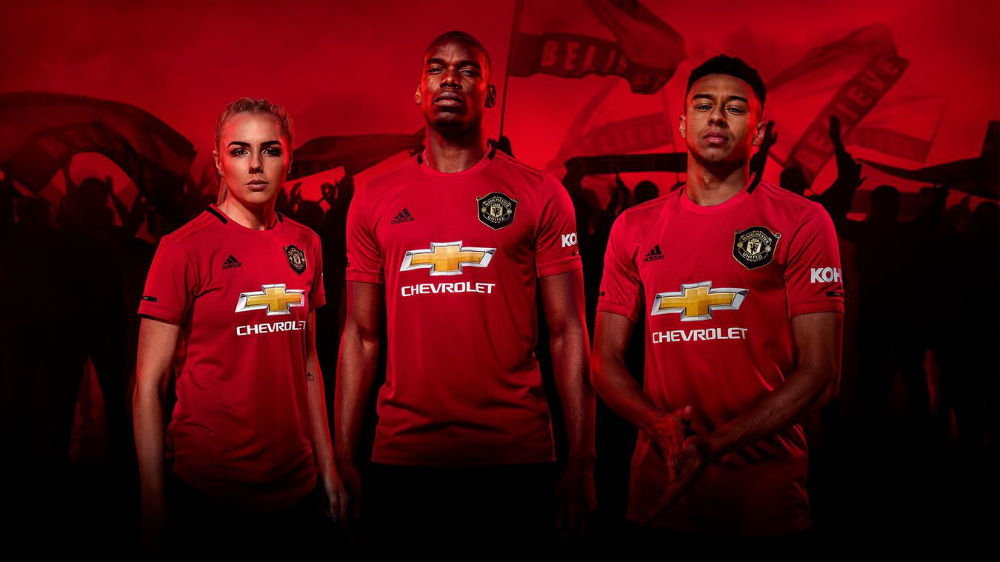 The Red Devils’ treble winning team will certainly go down as one of the most iconic teams in European Football history. The 2019-20 edition of the iconic red jersey pays homage to the treble winning team from 20 years ago. The minutes of the goals scored by Sheringham and the current manager Solskjaer is printed on the sleeves. The shirt also features the dates of the FA Cup Final and the decisive Premier League match. The crest is also a nod to the one used in the 1998-99 season. This shirt provides a reminder about the rich history of the club and that historical season. Newcastle United’s away kit with green shade is a great and different look than their iconic black and white stripes even if their form away from home this season has been pretty poor. However, with 35 points they are sitting comfortably above the relegation zone and looks as if they will extend their stay in Premier League. 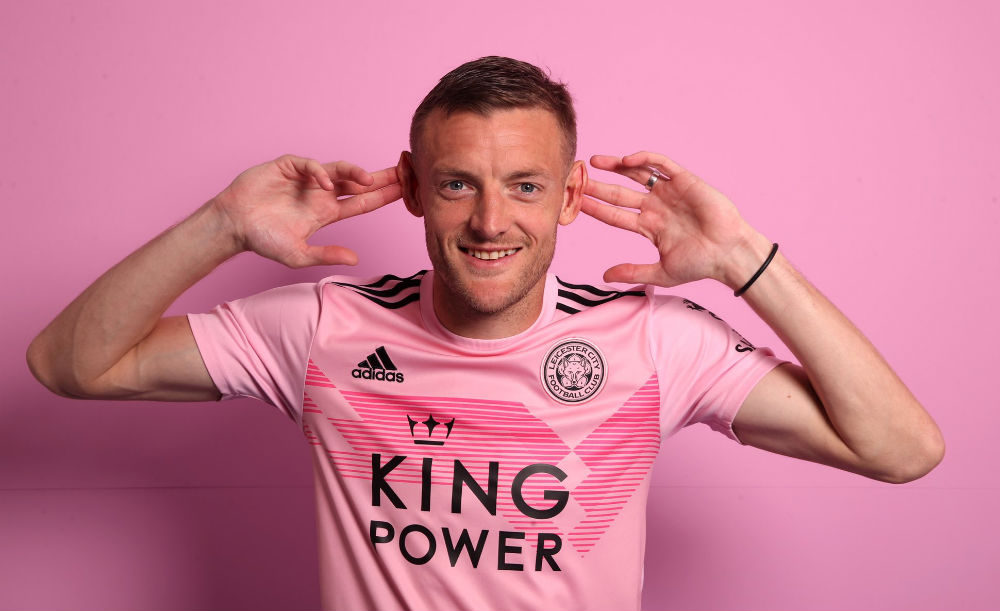 The Leicester away kit for the 2019-20 is based on the Campeon 19 template, the same template used by Adidas for Germany’s 2018 World Cup kit. It came as a surprise to most fans as the jersey features all the logos in black and the club crest in a pink-black combination. The Foxes deserve a nod in this list for going with something different and standing out from the rest. 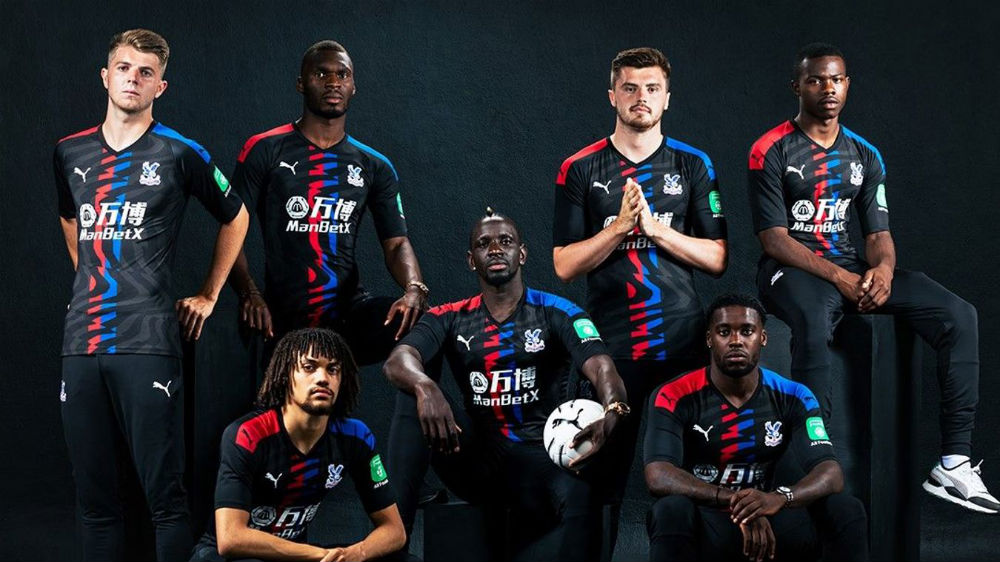 Puma has done a great job in giving the Eagles’ new away kit a different look. The red and blue on shoulders and along the middle of the shirt provides a beautiful contrast with the black and grey pattern that covers the rest of the front. As Palace look to stay in the Premier League for at least another season with 39 points already, it’ll be interesting to see what this partnership with Puma yields next season. 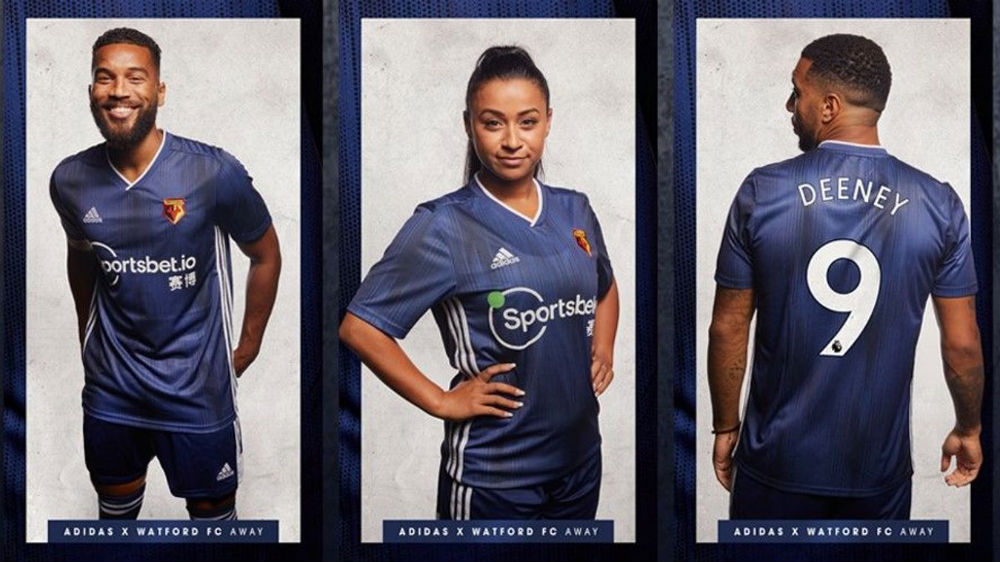 Watford’s away kit is a beautiful combination of navy blue with white stripes. However, it is not unique as it matches with Cardiff City’s home kit who use a different shade of blue. This Hornets jersey is an upgrade from their last season away kit. The official online store of the club, The Hornets Shop provides an appropriate description for the kit- “The game is yours. Your opponents just don’t know it yet.” 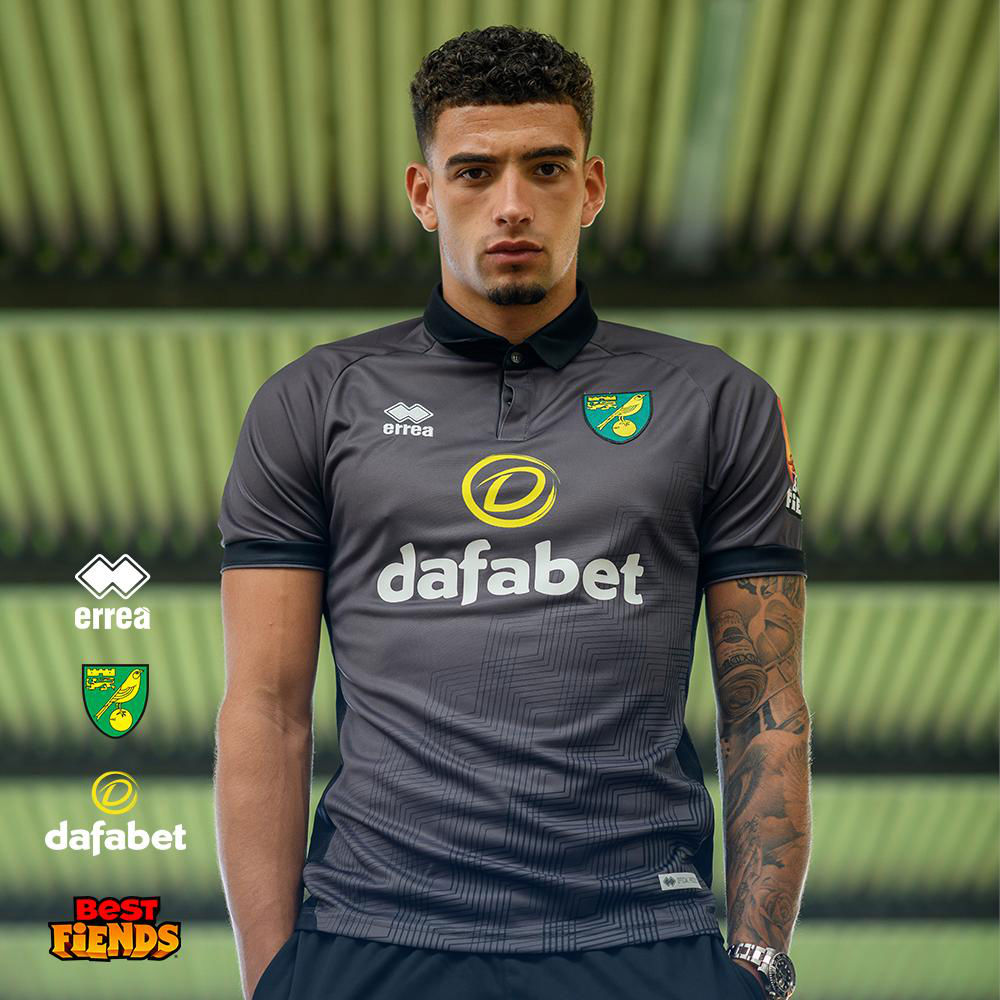 The third kit for the Canaries is an unusual yet gorgeous combination of anthracite with white logos and black collar. The shirt also features a geometric gradient pattern towards the bottom on the front of the shirt. The Italian company Errea has done a remarkable job, quite contrary to what the players have done on the pitch as they sit at the bottom of the table. 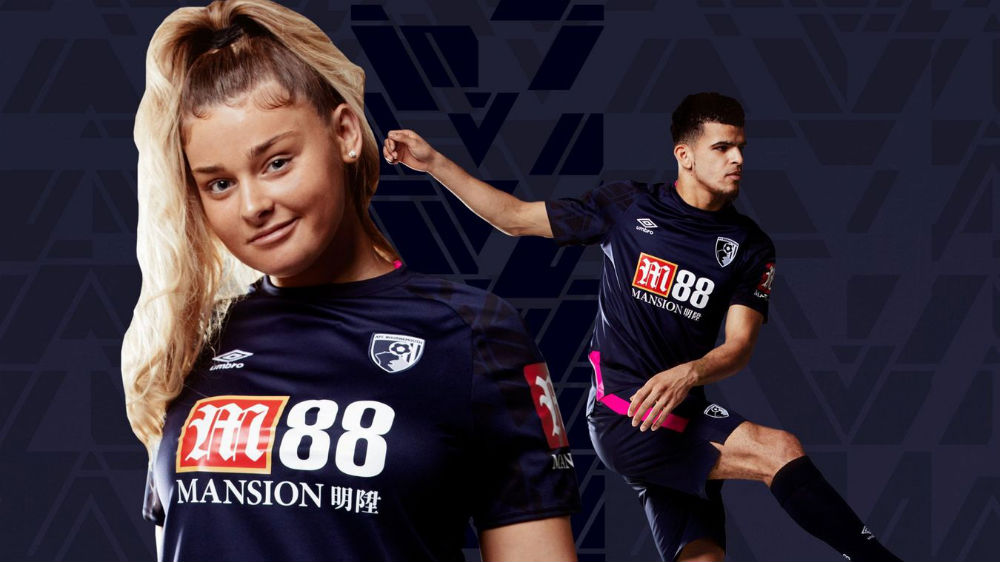 The Cherries latest away jersey with the Chevron pattern on the sleeves gives a nod to their popular kit of the early 90s. The dark blue is complemented by shades of pink on the inner neckline and the curves. The front features the club’s crest in white and blue colours while there is a stylized ‘AFCB’ text on the rear neckline. 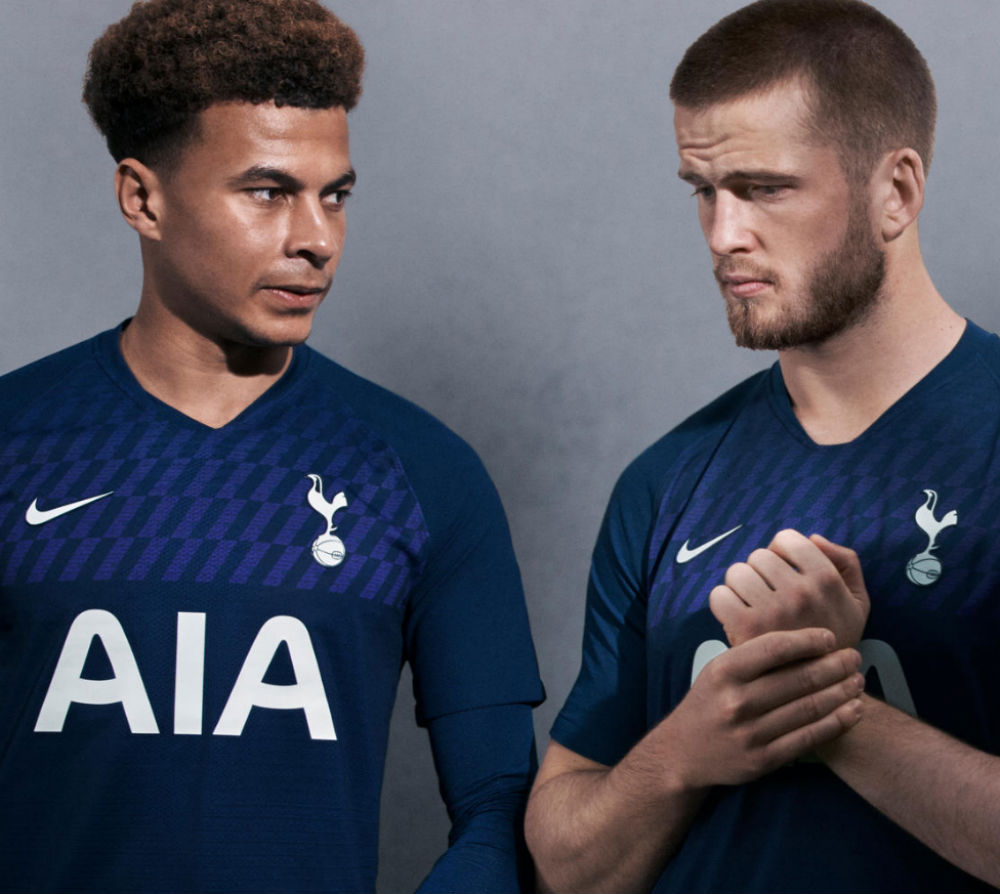 The 2019-20 Spurs away kit is predominantly navy blue with purple jagged pattern. The crest and logos are in white at the front of the shirt. Inside the collar, the shirt features the club’s motto in Latin, “Audere Est Facere” (To Dare Is To Do). Last season, Nike faced a lot of backlash from Spurs fans as the away kit looked similar to that Barcelona’s training ground kit. This season Nike was wise enough to give the fans an unique and beautiful Spurs jersey. 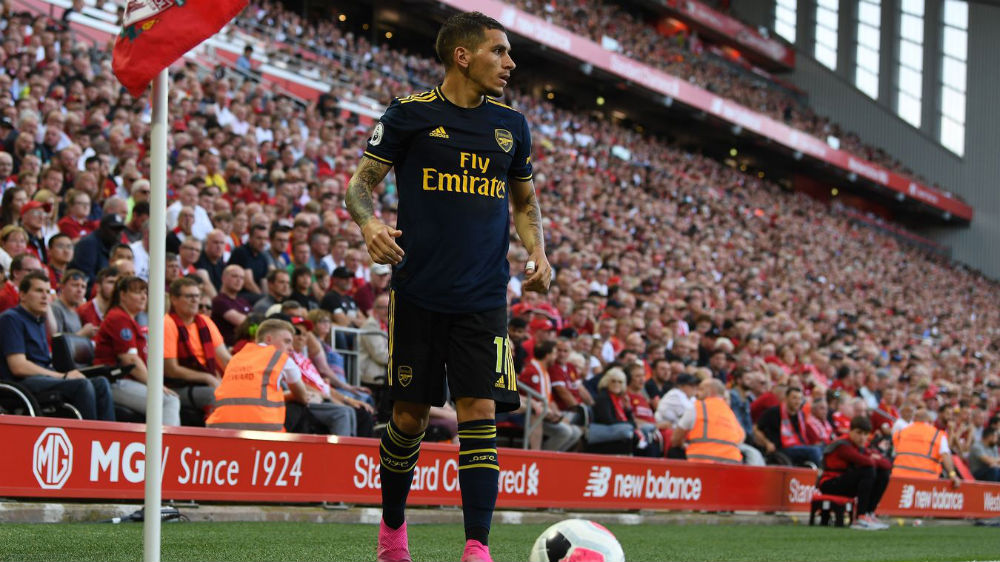 The Gunners third kit is amazing in every way possible. The dark blue and the yellow stripes complement each other very well. The crest is formulated with black and yellow colour, while the rest of the logos are in yellow. With a new manager at the helm it remains to be seen if Arteta’s style of play can match the electrifying nature of the kit.