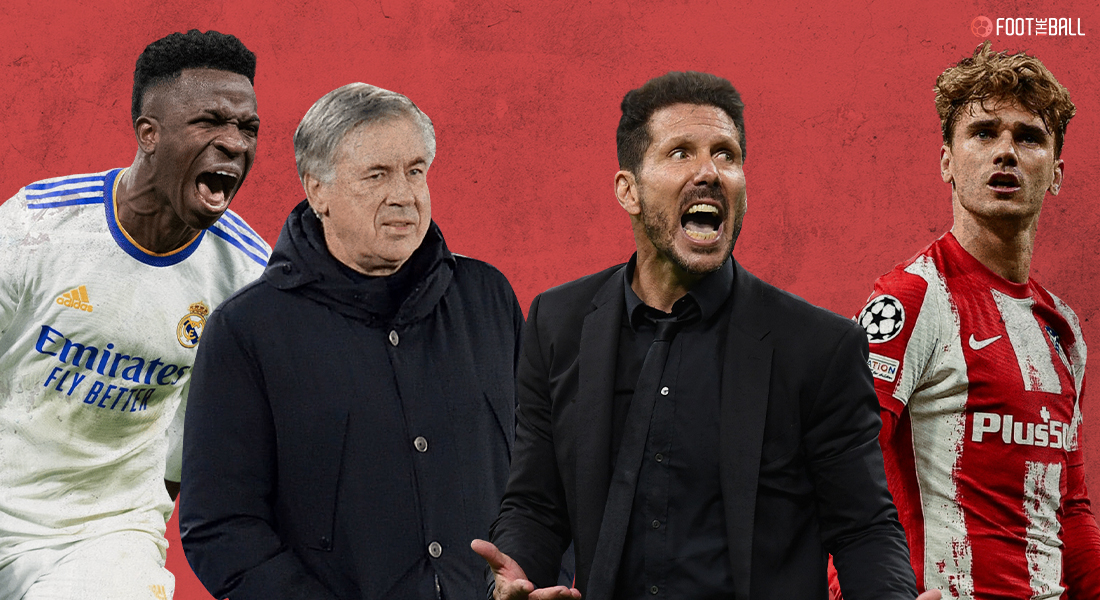 It’s the Derby de Madrileno when Atletico Madrid visit Santiago Bernabeu to face a mighty version of Real Madrid on Dec 12, 8 PM GMT. The Madrid derby is always a spicy affair between the two teams, one of whom has been the traditional powerhouse, in Real Madrid, and the other a plucky upstart, now standing toe-to-toe with their illustrious rivals, Atletico Madrid.

Real Madrid come into the game on a sparkling run of form. Carlo Ancelotti’s charges look to have finally figured out the winning formula. Winners of their last 5 games, while just a single loss in the league, in August, has them sitting pretty at the summit, holding an eight-point lead over Sevilla, who have a game in hand.

Their city rivals have had a more up-down season so far. Their usual defensive resilience has taken a battering this season. Having already conceded 16 goals in 15 games, they are 4th in the table. They come into the game on the back of a good performance against Porto, which sealed their passage into the Round-of-16 of UCL. However, their last La Liga game was one to forget, as Mallorca upset them at home, 1-2.

Although the injury slate for the white half of Madrid is relatively clean, their one injury doubt will give coach Ancelotti sleepless nights. Their talisman, Karim Benzema, is an injury doubt. The prolific striker has been struggling with knee problems and faces a race against time to be fit for the derby. Another start for Luka Jovic could be in the offing if the French forward fails to make the team. Dani Ceballos looks close to a return after a long-term ankle injury but this match comes too soon for him, he will surely be out of the reckoning for this game. There are no suspended players at Real Madrid. Real will effectively at full-strength if Benzema proves his fitness. Something which cannot be said for their crosstown rivals.

⚪According to @melchorcope, the injury to Karim Benzema is not serious.

However he is out of the Inter game and a doubt for the derbi madrileño at the weekend. He didn't train with the group today.#LLL
🧡🇪🇸⚽ pic.twitter.com/zO5Sz7jeRY

Atletico Madrid’s injury problems are a bigger headache for Simeone. First-choice striker Luis Suarez sustained an injury recently and he is expected to be out for this crucial match. Joining him in the physio room will be RB Sime Vrsaljko and CB Jose Gimenez. However, the extent of injuries of the latter two is not yet clear and they could still make a return to the squad. Fans will be eagerly awaiting any updates from the Atletico boss on the fitness of his charges.

Luis Suárez has undergone tests that have ruled out a rupture. The evolution of his symptomatology will determine his availability for the Madrid Derby.

Despite leading the La Liga by nine points, Real Madrid’s xPts (Expected points according to their performance in each game) is just 29, a full ten less than their actual points tally of 39. Most of this is down to the prolific work of their attacking force, where Madrid have scored 37 goals from an xG of 30.53. Leading the way is Karim Benzema, but in his absence, the responsibility will be on Vinicius’ shoulders.

Vinicius Júnior in La Liga this season [rank among all players across Europe's top five leagues]:

Adds so much to this Real Madrid side. 🔥 pic.twitter.com/OAMq4FfIRF

The tricky Brazilian has enjoyed a breakout season this year. Always renowned for his pace and trickery, Vinicius has added that end product to his game on his ascent to becoming a global superstar. The Brazilian has already scored ten goals, providing two assists in 16 games in La Liga. Add two goals and three assists in the UCL, this campaign has marked the arrival of Vinicius Jr on the world stage. Real Madrid pose a threat from both wings with the Brazilian duo of Rodrygo and Vinicius, and Simeone’s already depleted backline could have a hard time keeping them quiet.

In the absence of their usual defensive steeliness, Atletico Madrid might be better off turning this game into a shootout. Although they will miss Luis Suarez, Simeone will be expecting his other attackers to step up and take the initiative. At the forefront of that attacking force sits Antoine Griezmann. Arriving to much fanfare this summer from Barcelona in a homecoming of sorts, Griezmann is yet to reach the heights of this first spell at Atletico.

📊| Antoine Griezmann in the Champions League with Barcelona in the 19/20 and 20/21 seasons combined:

Griezmann in the Champions League with Atlético Madrid in the 21/22 season SO FAR:

However, he has recently shown signs of returning to form. The forward has seven goals and three assists in the campaign so far in La Liga and UCL. His performances have been better in UCL than La Liga which might point to the fact that he raises his game for the occasion. On the domestic front, the occasion doesn’t get much bigger than the Madrid derby. Real Madrid would hope to stifle Atletico’s attacking charge, with the main responsibility being on David Alaba. That particular duel could a long way in deciding the fate of the game.

While the Madrid derby has generally been a game of tight margins, this could be different as both of the teams’ defensive structure has looked questionable, to say the least. Still, Real Madrid’s form and momentum could carry them to a win here, solidifying their place at the summit. FootTheBall predicts Real Madrid 3-1 Atletico Madrid.