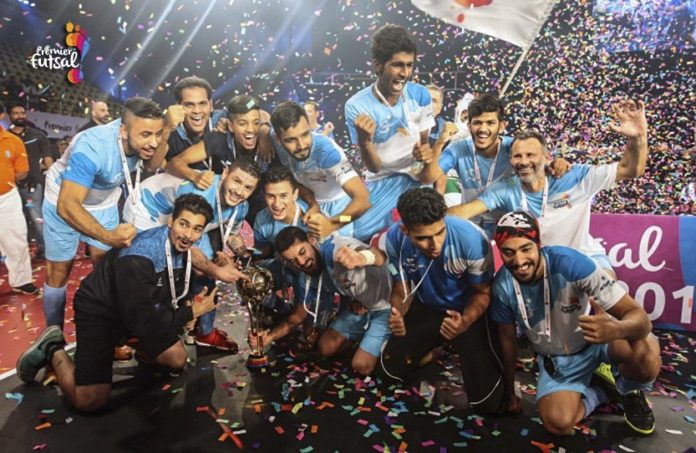 If Man United fans in England believe Ryan Giggs still has plenty to offer then they will find Indian crowd agreeing with them, as his team Mumbai 5s clinched the debut title of the Indian Premier Futsal.

Giggs decided to become a player for the Mumbai team, in a two-week tournament, after leaving Manchester United on July 2.

The final was held on Sunday with Mumbai defeating Kochi side, which included former Real Madrid right-back Michel Salgado, 3-2 on penalties after a 1-1 draw in normal time.

Giggs stepped up to take his penalty when the shootout was tied at 2-2, with the sides having taken three kicks apiece, but the damage was lessened when Salgado took the next kick and also failed from the spot.

Manchester United legend Paul Scholes believes that the level of the game in the ongoing Premier Futsal was much higher than any other tournament he has seen before.

“The standard of play has been really good and there are exciting players and when you watch this players, it is hard to understand why they are (not) playing proper football rather than Futsal,” said the 41-year-old former midfield maestro at Old Trafford.

Despite the controversies and challenges the tournament faced in its debut year, Premier Futsal promoter and chairman Xavier Britto is confident of the sport’s future in India, and intends to bring the league back for its second season in January next year.

It was a pleasure having these legends around! #PremierFutsal will be back next season. #NaamHaiFutsal pic.twitter.com/tOhtJ9sahb

“The response we got for the first season has been very good. Most of the matches saw stadiums drawing above 90 per cent occupancy. We noticed a lot of young women enjoyed the games as well. It’s a good start for sure,” says Britto.

The new teams could be from Pune, Vizag or Delhi, and the new venues could be Mumbai, Kolkata and Bengaluru.

In a first for any sports in India, the tourny was also available on Facebook Live, the new video platform of the social networking site.

According to a report in the Business Standard, Britto added that the success of the tournament can be gauged from the response it received on social media with an organic reach of 12 million on Facebook and 3.5 million impressions on Twitter in July.

The promoter also hopes to have a good sponsorship run in the second season. “This year, we were not very aggressive. It’s a new sport and format. In India, there is a wait-and-watch period for anything new. Now, when people have seen the quality of the games, and that audiences can be interested in the tournament, I am sure we’ll have brand associations. We have already got requests, and from international brands,” says Britto.

The league is looking at finalising the title sponsor for the tournament in the coming weeks, and will be looking at long-term partners; those willing to commit for at least three years.

What a finish to @PremierFutsalHQ. Futsal never fails to deliver. The futsal comp with the biggest global attention in the game’s history.

Thank you India, still upset for losing the final on penaltis but hospitality defines this country