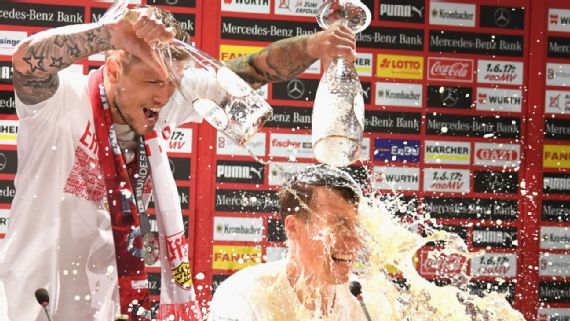 Stuttgart lifted the title after beating Wurzburg 4-1 while Hannover shared the spoils 1-1 with Sandhausen as both teams secured an immediate return into Germany’s top flight, following the last round of the second-division Bundesliga 2016-17 season on Sunday.

After a one year absence, Stuttgart sealed their comeback into the first division after finishing atop the standings to snatch the second division title ahead of second placed Hannover.

Stuttgart staged a nervous start and needed 32 minutes to break the deadlock on home soil as Matthias Zimmermann unleashed a hammer from 25 meters to make it 1-0 on the scoreboard.

The hosts increased the pressure after the restart and doubled the lead through Simon Terodde following a square pass from Daniel Ginczek in the 59th minute.

Wurzburg showed vital signs in the 78th minute when Tobias Schroeck shocked the hosts after reducing the arrears out of the blue.

The VfB remained responded through the second division’s top striker Terodde, who slotted home his 25th goal of the season, to restore the two-goal lead two minutes later.

Stuttgart was not done with the scoring and added another goal to their lead as Ginczek rounded off the final game of the season with a drop kick from 18 meters in the dying minutes of the game.

Elsewhere, Hannover completed the season in 2nd place and ensured an automatic promotion to Germany’s top flight with a 1-1 draw at Sandhausen. Andre Breitenreiter’s men held Sandhausen to a 1-1 draw as Florian Huebner’s leveller cancelled out Thomas Pledl opener for the hosts. 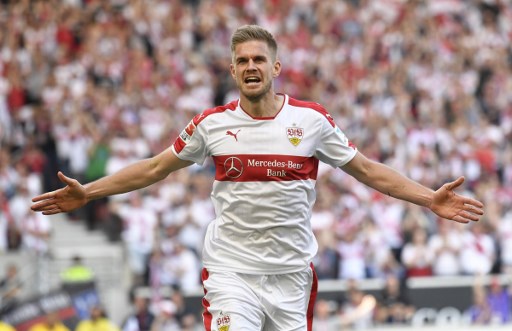 Braunschweig will have the chance to battle for a top-flight Bundesliga berth as the Torsten Lieberknechts’ men finished the season on the 3rd place of the standings following a 2-1 win over Karlsruhe.

Domi Kumbela scored the opener for the hosts before Bjarne Thoelke equalized the scores moments later. Braunschweig had the last laugh as Julius Biada snatched the 2-1 winner.

With the win, Braunschweig will encounter top-flight team Wolfsburg for two relegation playoff games on 25 and 29 May.