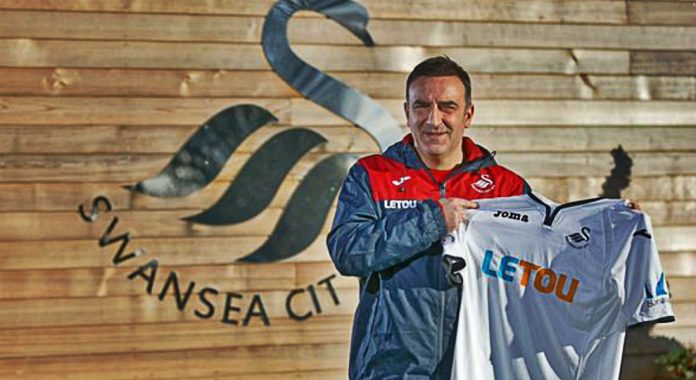 Swansea City have appointed Carlos Carvalhal as their new manager in a bid to avoid relegation from the Premier League.

Carvalhal was axed by Sheffield Wednesday on Christmas Eve after the Championship club dropped to 15th in the league table.

But he has since held successful talks with Swansea and has made a quick return football management with an objective to lift the Swans from the relegation zone in the Premier League.

He joins the club after Paul Clement was sacked following Swansea’s disastrous run of results in the Premier League this season.

Leon Britton, who was in charge of Swansea’s last two games, was appointed as the caretaker manager after Clement’s sacking.

But Britton, who had been coaching their under-23s, had made it clear he did not want the job permanently.

According to reports, Swansea tried to rope in a big name such as as Louis van Goal and Ronald Koeman before appointing Carvalhal as their new boss.

Swansea chairman Huw Jenkins said: “We are very pleased with the appointment.

“We felt we needed to get the managerial situation resolved as soon as possible and while the timing is not always perfect, we can look forward to the second half of the campaign with renewed optimism.

“Carlos’ time at Sheffield Wednesday, which included securing two consecutive play-off places, highlighted that he has great character and personality to lead the squad and the football club, which is vital at such a crucial time.

“He has built up a lot of experience over the years which will ensure the team is structured and organised.

“He is driven and ambitious and while he has a big challenge ahead of him, I know he will tackle it without fear.”

His first match in charge of the Swans will be against Watford on Saturday.