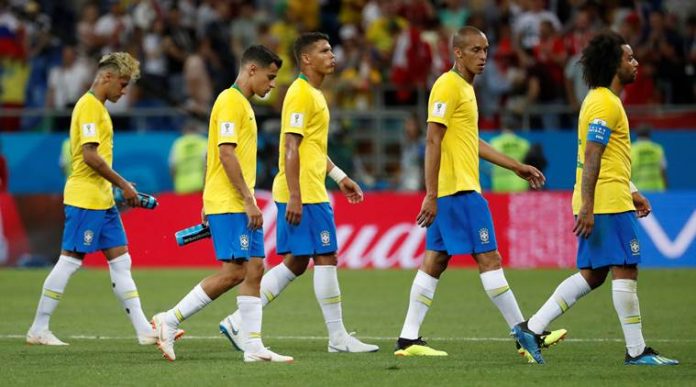 Brazil disappointed on their World Cup opener as they were held to a 1-1 draw against Switzerland in Rostov-On-Don on Sunday night.

Although Philippe Coutinho put Brazil ahead, Steven Zuber’s header meant the game ended in a draw as Brazil disappointed in the second half and lacked the fluidity to break down a well-worked Swiss side.

As expected Brazil coach Tite opted for an attacking line up with Willian, Gabriel Jesus, Neymar and Phillipe Coutinho on the pitch, while the Swiss stuck with their favoured 4-2-3-1 formation instead of opting to play with three central defenders as some thought they might.

The first chance fell to Blerim Dzemaili who volleyed over the Brazil bar, before Brazil responded with a Willian cross-shot and chance for Paulinho, who stabbed the ball wide after work from Coutinho and Neymar.

Brazil were clearly on top and Coutinho opened the scoring with a typical 25-yard shot which curled past Yann Sommer and into the Swiss goal off the inside of the post in the 20th minute.

The Brazilians looked content to take their foot off the gas after the goal and settled for keeping possession, although it needed some good anticipation from Swiss defender Manuel Akanji to stop Gabriel Jesus getting in on goal and Thiago Silva headed over from a corner in injury time.

The Swiss didn’t get a shot on target in the first half, but they were level five minutes after the break when Steven Zuber took advantage of some poor marking from a corner to head home in the 50th minute with Joao Miranda claiming a push.

Tite responded by replacing Casemiro, who had been booked, by the more direct Fernandinho, although his side still looked uncomfortable as the Swiss clearly gained confidence and he replaced Paulinho with Renato Augusto in the 68th minute.

Coutinho shot wide after Lichtsteiner misjudged a cross, while at the other end Dzemaili shot tamely at Alisson after a smart pass from Shaqiri.

Gabriel Jesus then went down asking for a penalty following a challenge from Akanji, but the referee waved play on, before Neymar tried his luck only for Sommer to claim easily.

Roberto Firminho was Brazil’s last substitute and he smashed a shot over the bar and although Miranda and Renato Agusto had late chances to win the match for Brazil neither were able to hit the target or even work Sommer, who only had one tough save to make all night.