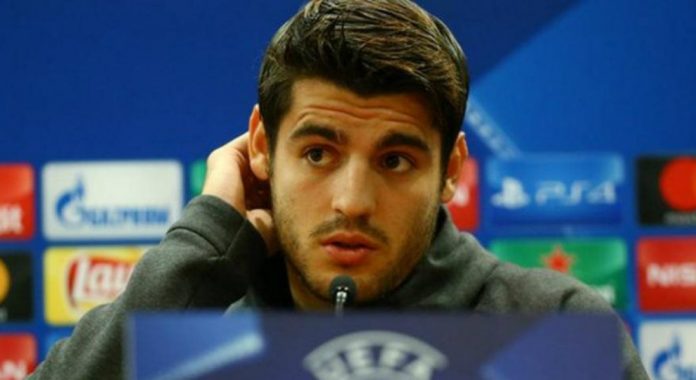 Blues striker Alvaro Morata was forced into making an embarrassing U-turn having previously placed his Chelsea future into doubt.

In an earlier interview Morata claimed that he did not see himself staying in London “very long” because he finds the city too big and too stressful.

But ahead of Chelsea’s Champions League clash with Roma the former Real Madrid striker made a massive U-turn and claimed that he would be happy to stay at Chelsea for another 10 years.

Morata, who joined the Blues on a five-year-deal from Real Madrid for a whooping £70million transfer fee, said: “I want to say again that we had a problem of understanding in this interview.

“If Chelsea proposed me 10 years I’d probably sign that too. I’m happy with this club, in this city, with everything in London. I really like London and, probably, if I improve, I can stay here more than five years.

“But I need to score many goals otherwise Chelsea will buy another player.”

Previously on Monday, in an interview with an Italian newspaper, the Spaniard said: “I do not see myself living here for very long. It’s too big, too much stress, too much of a metropolis.”

And such a statement had triggered the panic alarm at Stamford Bridge as Diego Costa had said similar things before his way back to his former club Atletico Madrid this summer.

But ahead of Chelsea’s Champions League clash with Roma, Maorata insisted that his comments were misinterpreted, saying: “I wanted to say, probably in the future when I finish in my career, I won’t live in London.

“But now, at the moment, I’m very happy in London and enjoy living in London with my wife.

“Probably, in the future, when I need to bring my child to the school and take up school when I finish my career, I’d prefer to come back to my country.

“For me, I prefer the place I was born. But now I’m very happy. When I say it’s a stressful city, I’m only talking about the traffic and that there are a lot of people.

“But it’s an incredible city with many religions and many kinds of different people, so I really enjoy London.”

Chelsea boss Antonio Conte rubbished the controversy, and insisted that Morata is happy, because he was in the same situation last season.

He said: “I think Alvaro is a good person and is enjoying his time in London, enjoying playing with Chelsea, a great team.

“And I know very well where he’s living now with his wife. It was the same building that I lived in last season. A lovely place and not so far from the training ground.

“But I’m sure about this also because every time I have spoken with him, he has told me he’s very happy, happy for this fantastic experience for him, for his wife.

“Personally, you know very well that last season I was alone without my family. When you stay abroad to work and above all you work with a lot of pressure, it’s good to have your family with you.

“This season, for example, I solved this problem because my family stay with me and we’re enjoying our time in Cobham, living in Cobham. We are enjoying London, enjoying this league.