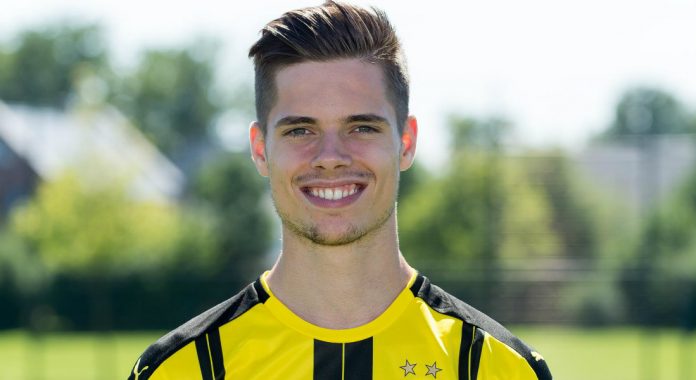 Man City boss Pep Guardiola is ready to fight his former club Barcelona for securing the services of Borussia Dortmund star Julian Weigl, according to reports.

Barcelona desperately want to sign Weigl as a long-term replacement for Sergio Busquets.

And the Catalan giants are ready to launch a bid to lure Weigl to Spain next summer.

But they are set to face stiff competition from Guardiola’s Man City, who have reportedly shown huge interest in the German midfielder.

According to Spanish newspaper AS, Man City bosses are ready to break the bank for Weigl next summer.

The report suggests that Barcelona are in need of a long-term replacement for Busquets, while Man City are also planning for the future with Fernandinho and Yaya Toure out of contract at the end of the season.

The German midfielder has only made five appearances for Dortmund this season after recovering from a broken ankle suffered at the end of last season.

But both Barcelona and Man City are high impressed with his performances from last season and now are at loggerheads to secure his signature.

Weigl signed a new deal until 2021 last December and any potential suitor would have splurge huge cash to sign him next summer.

And rumours claim that both Barca and City are ready to match Dortmund’s demands for roping in the German international.

Andre Gomes has failed to prove his mettle at Barca. The Portugal star has failed to convince the club bosses, who had thought that he would take control of the Barca midfield in the long run. And now the Portuguese could be put on transfer list in January

The same goes for Sergi Roberto, although the Barca prodigy is versatile and can play in both defence and midfield.

As for City, the Premier League leaders invested over £160million on players in the summer window with the remit of winning the title and at least reaching the Champions League semi-finals.

And if we talk about City, the current Premier League leaders are undoubtedly the best side in Europe right now – having spent £160million on players in the summer window as they aim to win the league title and reach at least the semi-finals of the Champions League.

The Etihad board has identified Weigl as the right player to maintain their strength in the midfield as the board looks to back Pep Guardiola, who has not won the Champions League since leaving Barca in 2012.