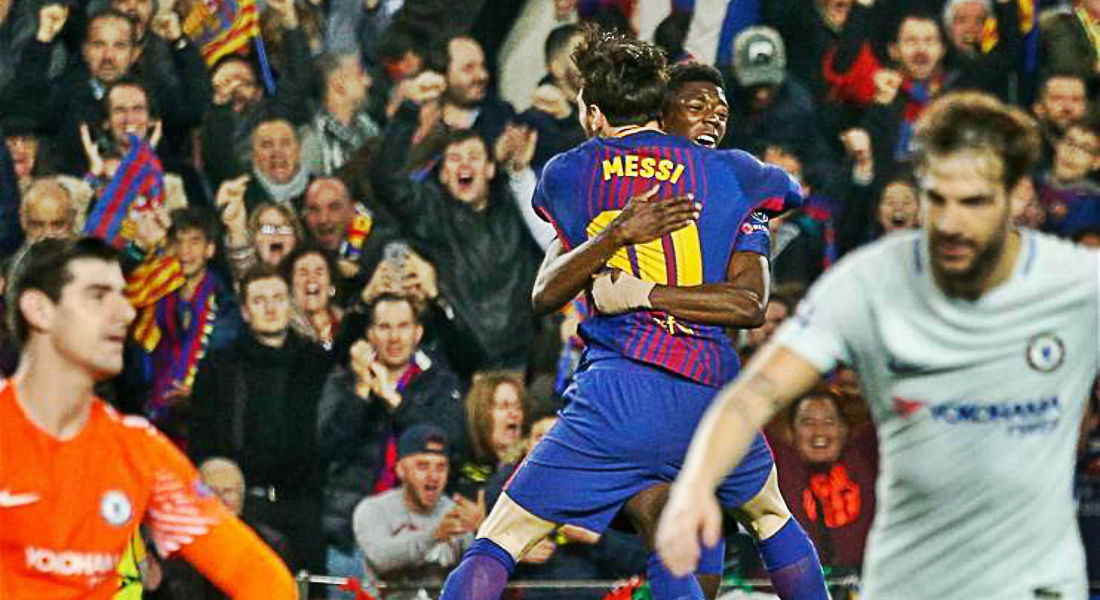 Leo Messi was once again FC Barcelona’s hero as the La Liga leaders beat Chelsea 3-0 in the Camp Nou Stadium on Wednesday night to move into the last 8 of the Champions League.

The Barca fans paid homage to Messi with a banner saying ‘God Save the King’ as the sides took to the pitch and the Argentinean didn’t disappoint as he scored two goals and set up another to take Barca into the quarter-finals of the Champions League for the 11th consecutive season.

With Andres Iniesta making a rapid recovery from a hamstring injury, Barca coach Ernesto Valverde included him in the starting 11 along with Ousman Dembele, while Chelsea included Olivier Giroud in a side which included Eden Hazzard, Willian and former Barca midfielder, Cesc Fabrigas.

Chelsea sat deep at the kick off, but Messi opened the scoring after just two minutes, slotting home from a narrow angle after linking with Luis Suarez.

The goal woke Chelsea up and take the game to Barcelona with Hazzard and Willian both seeing shots blocked before Messi then produced another moment of magic with a run and pass into space to set up Dembele to smash home his first goal for the club at the best possible time.

It was end to end to end stuff and Ter Stegen saved well from Marcos Alonso before N’Golo Kante fired wide moments later when well placed as Chelsea refused to lie down and Marcos Alonso also went close when his free kick brushed the outside of the Barca post.

It should have been 3-0 straight after the break when Courtois passed the ball straight to Suarez, but the Chelsea keeper them redeemed himself with a fine one-on-one save.

Barca coach Ernesto Valverde decided not to further risk Iniesta’s injured hamstring and replaced him with Paulinho, before Sergio Busquets also had to leave the game to be replaced by Andre Gomes, who only a couple of days earlier confessed his confidence problems at the club.

The home side were under pressure, but once again Messi stamped his authority on the game beating Courtois with a low show from the left hand side of the area to put the result beyond doubt.

Courtois saved well to deny Paulinho’s header in the closing minutes, but a fourth goal would have been harsh on Chelsea, who for periods of the game had threatened, but Barca have a player called Messi and they don’t.