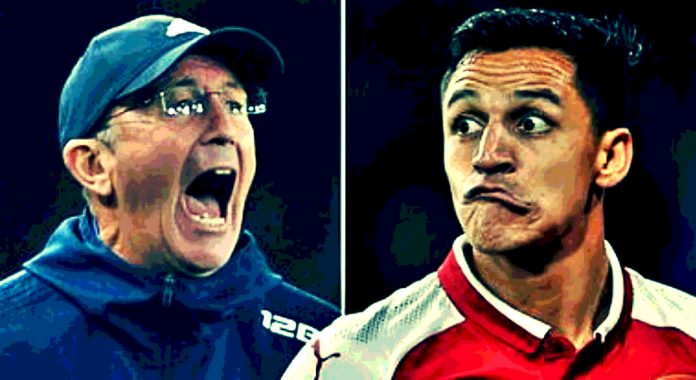 The Welshman was left frustrated as he was not happy with the inconsistent decisions taken by referee Bobby Madley, who did not award his side a penalty in the first half as they lost 2-0 against Arsenal.

Jay Rodriguez was brought down to the ground in the box by Arsenal defender Shkodran Mustafi but the referee did not award West Brom a penalty.

Pulis did not want to talk about the referee’s decision claiming that “everyone has seen it and can make their minds up.”

Pulis said that Rodriguez was “very honest” for not rolling around looking for the decision but he blamed Sanchez for “diving.”

Failing to hear a whistle, Rodriguez got back to his feet and saw a shot tipped onto the post by Petr Cech, before Jake Livermore missed the rebound.

Pulis was far from pleased to see referee Bobby Madley refuse to award a spot-kick and felt Rodriguez was punished for being “honest”, given that Sanchez had earlier won a free-kick in a dangerous position after going to ground following minimal contact from Craig Dawson.

Pulis said: “Everyone saw what happened today. If you want to make an example of something. Sanchez actually dives for the first free kick and I think he should be booked for diving.”

“Then you see the tackle in the box. The referee had a great view. Everyone has seen it and can make their minds up. I don’t have to talk about it.”

“The disappointing thing is Sanchez falls for the first free kick, that’s cheating. Jay is very honest and does not get rewarded.”

“We have not had a penalty at this club for over a year and none of my players roll around.

“We’re talking about the referees and decisions, the public out there will have seen the decisions and can make their own decisions.”

Rodriguez insisted there was definite contact from Mustafi and defended his refusal not to make more of the incident at the time.

“I felt contact and obviously went down. It wasn’t given, I got back up because I wasn’t hurt and saw a chance to score and Cech made a good save,” he said.

“For me, it was a penalty. It’s disappointing.

“I’m not going to be rolling round and trying to buy free-kicks if it’s not a free-kick. There was a decision there to be made and it’s one of those things.

“If you get the goal, you’re 1-0 up and it changes the game. We’ve got to move on and I thought we did well in the end.”

West Brom did not have luck on their side on Monday as Nacho Monreal saved a sure goal when he Grzegorz Krychowiak’s header off the line.

And to make the situation worse for the Baggies, Madley did not give a second thought before awarding Arsenal a penalty in the second half when Aaron Ramsey was bundled over by Allan Nyom.

“I was up the other end of the pitch. I didn’t quite see what happened but I’m sure there was contact, but the referee played advantage,” Ramsey said of the West Brom appeals.

He added on Nyom’s foul: “I thought I took it round him and he pushed me out the way. I think it was a penalty.”