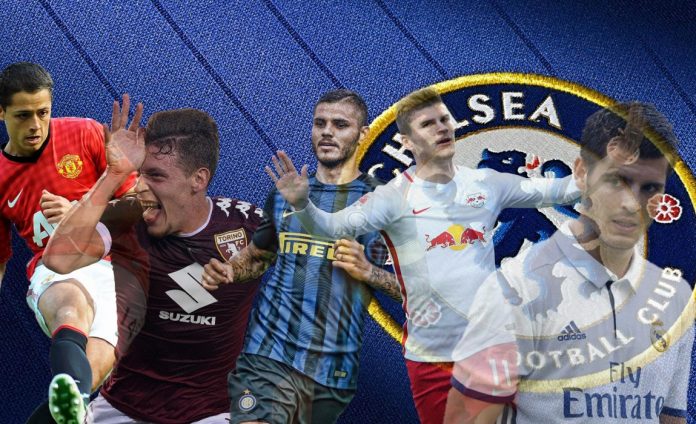 Jose Mourinho has beaten his former club in the race to sign the prolific forward after Manchester United agreed a £75million deal with Everton to sign the Belgium striker.

With pre-season training getting underway, Conte will be keen to get his transfer business done as quickly as possible.

We look at five strikers the Chelsea boss could now turn to:

[espl_heading size=”14″]Conte knows all about the talented forward who has been one of the star performers for Torino. Belotti, 23, has been targeted by a host of big European clubs including AC Milan and Paris Saint-Germain after netting 28 goal in just 38 appearances. The Italy international was among the top scorers in Serie A and would relish the chance to showcase his talents in the Premier League.[/espl_heading]

[espl_heading size=”14″]Alvaro Morata has dominated headlines in England in recent weeks as reports suggested he was on the verge of completing a big money move to Manchester United. The Spanish forward returned early from his honeymoon to spark rumours that a move to Old Trafford was close to being completed. But with Jose Mourinho switching his attentions to Lukaku, the door could now be open for Conte to make his move for the prolific forward.[/espl_heading]

[espl_heading size=”14″]The Argentine forward has been earning rave reviews in Italy for Inter Milan after scoring 26 goals in just 41 appearances last season. The 24-year-old certainly has an eye for goal and the Italian giants would not want to lose their star forward during the summer. Icardi has made his breakthrough into the Argentina team and has been talked about as a long-term replacement for Juventus forward Gonzala Higuain. Conte will like the fact the talented forward has leadership skills as well, having been given the captain’s armband at Inter and could be the ideal signing in the Chelsea attack.[/espl_heading]

[espl_heading size=”14″]The former Manchester United striker could be set for an emotional return to the Premier League this summer and has still got the qualities that made him such a star performer for Manchester United. Hernandez has been banging in the goals at Bayer Leverkusen and was recently linked with a move to West Ham. But the Mexico forward could relish the chance to play for the Premier League champions and would take no time settling into the Premier League, which could be a major attraction for Conte. Chicharito may feel has he has unfinished business in the top flight and certainly has all the attributes to be a major star in England once again.[/espl_heading]

[espl_heading size=”14″]If Conte is looking for a gamble, he might turn his attentions to Timo Werner who is rated one of the best young talents in Europe. The RB Leipzig striker took the Bundesliga by storm last season scoring 21 goals in just 32 appearances and has already made his breakthrough into the Germany squad and showed his qualities at the Confederations Cup by helping his side win the tournament in Russia. Werner won the Golden Boot for best scorer and showed he is ready to play at the highest level.[/espl_heading]