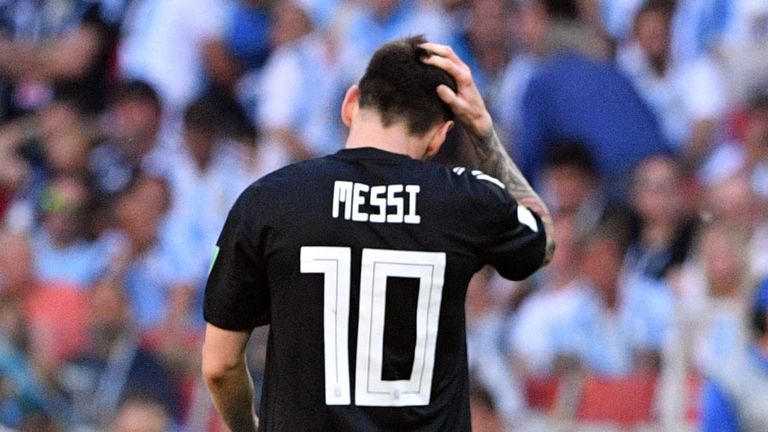 Messi: ‘It’s Time To Be Calm And Think About What’s Ahead’

Argentina must not dwell on their 1-1 draw against World Cup debutants Iceland on Saturday and begin preparing now for their next match against Croatia, according to Lionel Messi.

Argentina had 72% of possession and took 26 shots compared to Iceland’s nine in their opening World Cup Group D fixture at Spartak stadium.

But the Albiceleste’s dominance was not reflected on the scoresheet as Iceland defended resolutely, often with all 10 outfield players behind the ball.

“We are disappointed by not starting the tournament with three points,” Messi told reporters after the match. “But we have to be calm and think about what is ahead.”

“I think we deserved to win the game. They practically did nothing but defend and kick long balls. It is tough for everybody when teams close up like that and offer little space. Maybe at times we played with anxiety.”

Messi endured a frustrating afternoon and had a 64th-minute penalty attempt saved by goalkeeper Hannes Halldorsson.

Saturday’s result means Argentina risk being eliminated from football’s showpiece tournament if they lose their next match against Croatia on June 21. The two-time world champions will play their final Group D match against Nigeria five days later.

“We really felt that it was a complicated group, that it was going to be a difficult game,” Messi said. “Physically they [Iceland] are very strong. Croatia are a great team and Nigeria are also good. Now we have to think about what’s coming, rest, prepare well and not think about this game anymore.”

“The feeling when you go out to win and don’t succeed is one of frustration,” he said. “We came here in a positive frame of mind. We decided to go out and play to win against a team that is defensively very organized and dense. That stopped us from creating more chances than we did.

“This [World Cup] has just begun. We will learn from what happened and we have to make sure that we win the next match.