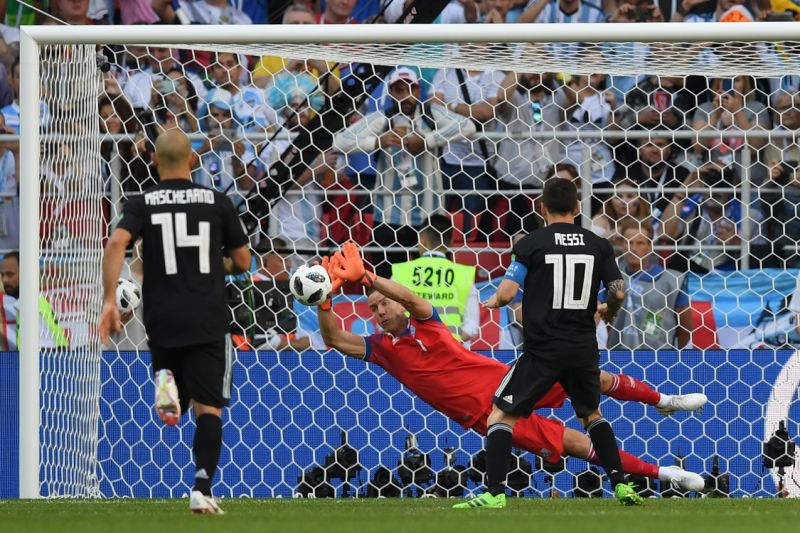 Argentina’s Lionel Messi missed a second-half penalty as Iceland claimed their first ever World Cup point in a 1-1 draw here on Saturday.

Messi had a weak 64th-minute shot easily saved by Iceland goalkeeper Hannes Halldorrson after Sergio Aguero of Argentina and Alfred Finnbogason of Iceland struck first half goals at the Spartak Stadium.

It was an encouraging display for Heimir Hallgrimsson’s men, who showed surprising attacking intent early before weathering an Argentina onslaught in the second half.

Argentina, meanwhile, will be rueing a raft of missed opportunities, especially in the final half hour. Their next match against Croatia on June 21 is suddenly a must-win affair as the two-time champions seek to avoid an early tournament exit.

Albicelste coach Jorge Sampaoli began the match with Aguero just in front of Messi in attack, leaving Gonzalo Higuain on the bench.

The South Americans threatened in the opening minutes with two Messi free-kicks that floated perilously into the penalty area.

But Iceland soon settled and Birkir Bjarnason should have done better when he flayed a shot wide from 12 yards after a counter-attack.

As expected, Messi was heavily marked by Iceland’s defence and the Barcelona forward was often forced deep to get involved. He twice had long-range efforts punched clear by Halldorrson.

Argentina took the lead when Aguero deftly controlled a bullet pass from Marcos Rojo before turning and unleashing a wicked left-footed shot that barely allowed Halldorrson to react as it cannoned into the top left corner.

The equalizer came four minutes later after Gylfi Sigurdsson’s rasping effort forced a lunging save from Caballero. The rebound fell to Finnbogason, who hammered in from close range.

Sigurdsson twice had chances to give his side the lead just before halftime: first with a 15-yard strike that again tested Caballero and then by flashing a volley narrowly wide.

Sevilla midfielder Ever Banega replaced Lucas Biglia in the 54th minute and the change made an immediate impact as Iceland
were pushed deeper.

Messi also became more influential. It was his inviting cross into the area that led a disorientated Hordur Magnusson to clatter into Maximiliano Meza. Polish referee Szymon

Marciniak pointed to the spot and the scene seemed set for another Messi rescue story for his country.

But the five-time Ballon d’Or winner appeared to hesitate before prodding a tame spot-kick that was parried away by Halldorsson.

Messi had further chances to score as Argentina pressed relentlessly in the final minutes. The No. 10 sent a free-kick over the bar and lashed long range attempts with either foot just wide of the target.