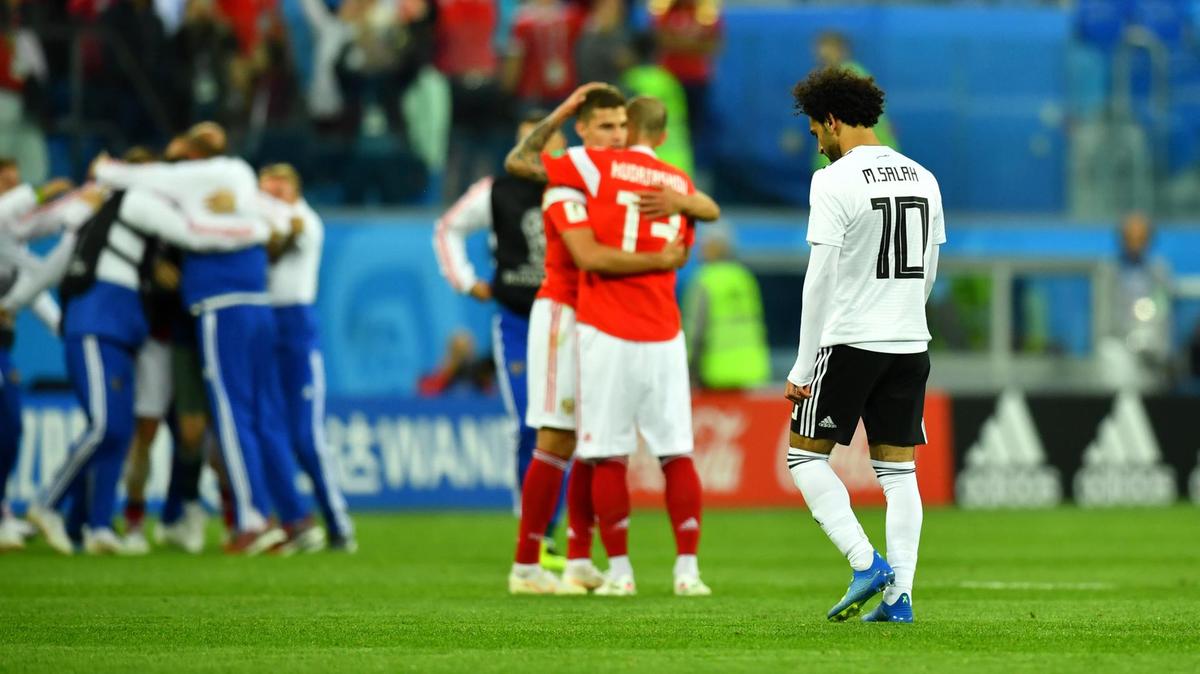 World Cup hosts Russia continued spectacular performances on Tuesday in their second World Cup group match with an impressive 3-1 over Egypt although Mohamed Salah returned to the pitch and worked really hard.

Russia now stand top of Group A on six points while Uruguay and Saudi Arabia take on each on Wednesday in the other Group A second round match.

The first goal came two minutes after beginning of the second half, when Russian Roman Zobnin’s off-target shot was met by Egyptian captain Ahmed Fathi. The latter, disrupted by Artem Dzyuba, turned the ball backward into his own gate.

Then in the 59th minute, Mario Fernandes blitzed down the right and delivered the volley to Denis Cheryshev. The Villarreal left winger lashed it home. It was his third goal at the World Cup.

Two minutes later, Artem Dzyuba touched the ball with his chest, turned and prodded it into the bottom right corner of the net.

Fresh from a 5-0 rout of Saudi Arabia, Russia appeared aggressive at the beginning, trying to dominate the pitch and find some chances in the Egyptian half.

In the 18th minute, Cheryshev poked a shot from distance, only to see the ball flying over the bar. Meanwhile, with Russian defenders engaging, Liverpool forward Salah only touched the ball five times.

Egypt, eager for a victory in their sixth match at the finals, grew into the game gradually. Before the halftime stroke, Salah, receiving a low pass from Abdelshafy, swept a left-foot shot but missed the gate.

His first World Cup goal was in the second half, when he was brought down in the box. Egyptian players called for VAR before the judge ruled for a penalty. Salah sent the ball into the net.

After 17 matches, the World Cup has already seen 10 penalties.

But the goal alone was not enough to shift the balance.

Russia, who last advanced into the knockout stage in 1986 as the team of Soviet Union, moves another step closer to qualifying in the last 16 of the World Cup.

“We have learned from our mistakes that did not allow us to be more successful in the past,” said the coach Stanislav Cherchesov. “We analysed the situation in terms of preparation and selection of players. Now we are happy we have two wins on our belt and that we are giving this joy to our supporters.”

“We have a group of solidarity. We need to rest well and see who is ready to do what and prepare ourselves well for the next game,” he said.

While hope for the Egyptian team, who are in their first World Cup since Italy 1990, was dampened in the rainy evening. In the opening World Cup Group A match against Uruguay, the Pharaohs lost 1-0. Salah, who was the recipient of the Premier League Golden Boot in the 2017-18 season, scored 44 goals in all competitions for Liverpool last season and netted 70 percent of all Egypt’s goals in qualifying, missed the game due to shoulder injury.

“I think nobody can deny his importance,” said the Egyptian coach Hector Cuper. “He was feeling good to play… We would have all preferred his injury to not occur.”

He said that the team did well in the first half. “There are 10 to 12 minutes when we did very badly, making some mistakes. That is why we lost,” said the 62-year-old Argentinian tactician.

“Our players have done their best and made enormous efforts,” he said. “I am proud of them. Maybe we lack a little extra things to win, but I must recognize the great efforts they had after 20 years in which Egypt did not take part in the World Cup.”

After the game between Uruguay and Saudi Arabia on Wednesday, Russia and Egypt will have their last group match next Monday, before the groups who will advance to the knockout stage will be finally decided.