Argentina are going to play arch-rivals Brazil in the Copa America 2021 final at the Maracana Stadium in Rio de Janeiro after beating Colombia in the semi-final in Brasilia. La Albiceleste had taken the lead in the second semi-final with Colombia in the 6th minute itself as Lautaro Martinez and Messi combined brilliantly.

But the Colombians fought their way back in the second half after Luis Diaz scored a picturesque goal just after the hour mark to level the scores and eventually the match went to penalties.

Argentina’s goalkeeper Emiliano Martinez was the shootout hero for his country as he saved three penalties from Colombia to send La Albiceleste through to the final in Rio on Saturday.

FootTheBall takes a look at the second semi-final in Brasilia as Argentina booked their place in the title decider with hosts Brazil.

MESSI-MARTINEZ COMBINATION SHINES FOR ARGENTINA AS COLOMBIA ARE SHELL-SHOCKED

Inter Milan forward Lautaro Martinez and Argentina captain Lionel Messi were at their brilliant best as the first half commenced in Brasilia.

The Barcelona legend went on a slaloming run on the right side of the pitch in the 4th minute, miraculously finding Martinez whose header glanced just wide of the far post. 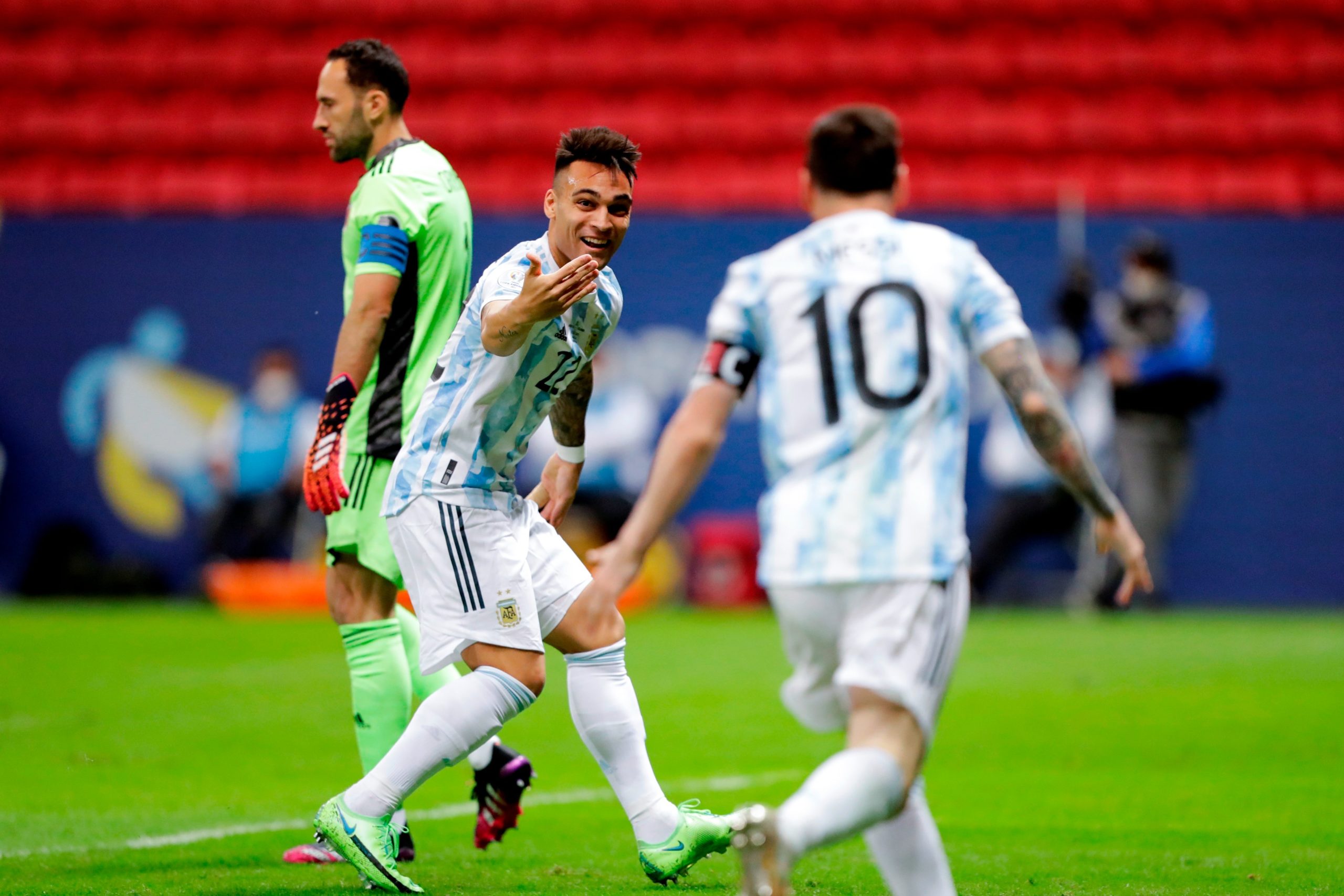 And 2 minutes later they both combined for the opening goal of the match as the deadlock was broken early on in the Brazilian capital.

Tottenham Hotspur midfielder Lo Celso found Messi inside the box with a brilliant defense-splitting pass, and the Argentina captain vied with former Barcelona teammate Yerry Mina to pass the ball to an onrushing Lautaro Martinez.

This time, the Inter Milan player made no mistake as he found the back of the net with his shot that saw the ball nestle in the bottom left corner of the goal. Argentina had put themselves in the driving seat with only 6 minutes on the clock

COLOMBIA COME CLOSE TO EQUALISING IN THE FIRST HALF

The Colombians had fallen behind early on, but they did not lose spirit after going behind in Brasilia.

In the very next passage of play after having conceded the opening goal, Los Cafeteros responded in impressive fashion as Juventus player Juan Cuadrado tested Emiliano Martinez.

And towards the end of the first half, the Colombians found renewed vigour and energy to restore parity. First Wilmar Barrios took a shot from distance that hit the post via a deflection from Lo Celso.

From the resulting corner, Yerry Mina rose the highest but could only direct his header onto the crossbar as Colombia rattled the woodwork twice in under a minute.

COLOMBIA CATCH ARGENTINA NAPPING AT THE BACK

The Colombians started the second half by making three changes to the starting line-up in order to step up their game and it finally paid off. Reinaldo Rueda’s team were the better side as Luis Diaz attempted a shot from outside the box in the 48th minute.

And just after the hour mark Colombia was on level terms in Brasilia as Luis Diaz finished a brilliant move with an equally brilliant shot that found the back of the net after he was released by a quickly taken free-kick down the left flank.

ARGENTINA WASTEFUL IN FRONT OF GOAL

La Albiceleste received a glorious chance in the 74th minute as Colombian captain and goalkeeper David Ospina rushed from his goal and the 6-yard box as Angel Di Maria dribbled the ball and laid it for Lautaro Martinez.

The Inter Milan player didn’t convert his chance as his shot struck a Colombian defender and Di Maria also couldn’t find the back of the net on the rebound as perhaps the best chance of the second half went by Argentina.

After a short while, Di Maria, after some deft footwork, found Messi inside the penalty box. The Argentina captain turned and went for goal but instead hit the post in the process.

Neither side were able to find a way through and it went down to penalties in the Brazilian capital.

EMILIANO MARTINEZ SHINES IN GOAL AS ARGENTINA GO THROUGH ON PENALTIES

It all went down right to the wire in Brasilia as both Argentina and Colombia prepared for penalties. Goalkeepers Emiliano Martinez and David Ospina knew that it was their time to shine.

The Argentina goalkeeper could not save Juan Cuadrado and Miguel Borja’s attempts, but saved the other three penalties taken by Colombian players as Argentina won 3-2 on penalties.

Earlier Rodrigo de Paul had fluffed a chance to go ahead when he took Argentina’s second penalty, but it didn’t come to haunt the Udinese midfielder as La Albiceleste booked their date with arch-rivals Brazil in what will be a blockbuster match in the final of the tournament.

Colombia, meanwhile, exit with their heads held high after they stretched Argentina to the maximum possible limit before falling behind on penalties