MESSI MAGIC ON A RECORD APPEARANCE 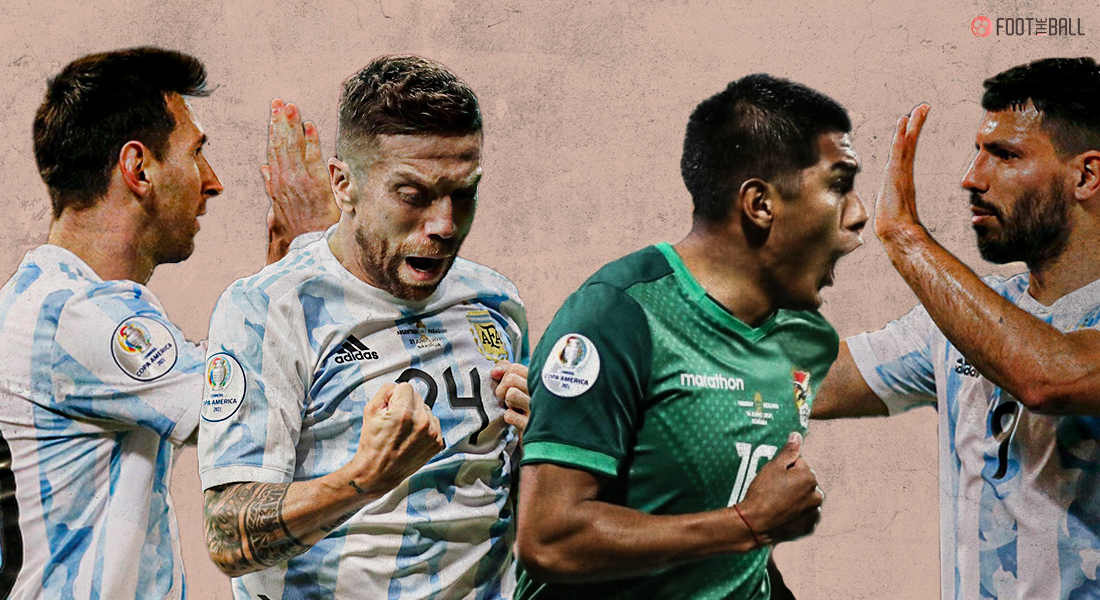 A vintage Lionel Messi performance helped Argentina trash Bolivia 4-1 in their final group stage game at the Copa America. The Albiceletse shined as a team tonight to clinch the top spot in the group. Bolivia on the other hand submitted quickly to their superior opponents to exit the tournament in the group stages again as the bottom-placed side.

An empty Arena Pantanal in Brazil played the host to this game. Argentina knew they needed to match Uruguay’s result against Paraguay to top their group. Bolivia having already exited the tournament without a single point to their name had nothing but pride to play for against Argentina.

This freedom gave Argentina the chance to rotate their starting eleven against Bolivia. Lionel Scaloni made six changes to the side that beat Paraguay. However, he handed historic caps to Lionel Messi and Sergio Aguero. Messi became his country’s outright record appearance maker with 148 caps. Aguero earned his 100th cap for the national team and joined an elite club with Messi and co. Bolivia too made four changes trying to salvage something from this game.

Ever since the whistle was blown there was only one outcome in this game. Argentina didn’t do anything different from the script and started attacking Bolivia right away. Carlos Lampe, the Bolivian keeper was forced into making a double save early on from Aguero and Angel Correa to keep the scoreline at 0-0. If not for his saves the scoreline could’ve been much worse.

Argentina turned on the party soon after as Papu Gomez scored soon after for the second game running. Messi went onto add two more goals to his name before the break. Erwin Saavedra pulled a goal back for Bolivia with slight hopes of a comeback in the second half. Lautauro Martinez scored immediately to restore Argentina’s three-goal lead and seal the game.

LET THERE BE GOALS

Argentina were unbeaten coming into this game. After a dull 1-1 draw against Chile in their opener, they won their next two games by a single goal. Though they were playing well they missed the finishing touch sometimes. They needed a goal-fest to ease the tensions going into the knockouts. Bolivia already conceded six goals in three games and looked the right opposition to unleash fury upon.

Messi lofted a delicious ball in behind Bolivian defence to find Gomez’s run. The Sevilla playmaker volleyed Argentina into the lead. The game looked to be in fine balance as Bolivia refused to budge. However, Gomez then won a penalty and allowed Messi to slot it past Lampe to put clear daylight between the sides.

Messi went onto add one more goal to his tally just before the break. Sergio Aguero marking his 100th cap played a Messi-Esque lobbed ball to find Messi himself charging on goal. Messi made no mistake as a delightfully chipped an onrushing Lampe from outside the box.

Saavedra appeared to put some life into the game as he finished a Justiniano cutback in the second half. Lautaro Martinez replaced Aguero off the bench and made an instant impact. The Inter striker scored the easiest goal of his nascent international career as he poked a loose ball from two yards out. Lampe was not going to be beaten once more as he stood firm to deny Messi a hat-trick.

This four-goal showing might have boosted the morale for Argentinians before they face Ecuador in the quarters.

THE ALBICELETSE TO WIN IT FOR MESSI?

This might be too early to say this but Argentina looks like a settled unit this time. Also, they have a well-rouded squad, unlike the past few tournaments. Brimming with young talents like Cristian Romero, Martinez they also have the experience of Messi and Di Maria to guide them. Lionel Scaloni has done a decent job to build this squad. It might be the best time for them to win the title.

Scaloni has opted for a 4-2-2-2 formation in the initial games with two striker approach. Later he changed his system to a 4-2-3-1 to have one single striker and let Messi operate in his favorite number 10 role. This has worked wonders as it brought in Papu Gomez a highly influential figure in the midfield. Also, the defence was boosted with talents like Marcos Acuna, Nicolas Tagliafico. In Emiliano Martinez, they have found a safe pair of hands in the goal after a long time.

The squad is set and firing now. They have to overcome nerves and give their all in the next three matches if they want to help Lionel Messi lift his first international trophy. This triumph is also important for the country as they seek to end a 28-year wait without a Copa. They must be wary of the threat Brazil poses to their title aspirations.

NO LUCK FOR THE LA VERDE

Bolivia came into the in the worst form possible. They had an Aging squad and had no star power to elevate them. They were the punching bags of the group and were comfortably beaten in all games. Paraguay put three past them in their opener. Chile and Uruguay scraped to wins in an unconvincing manner. Argentina ended their misery by scoring four and kicked them out of the tournament.

The one-time champions from 1963 had a leaky defence that conceded 10 goals. They registered only two goals. They came in the first match and the last match from the same source Erwin Saavedra.

This edition again shows how far they’ve slipped behind the continent’s best. Bolivian football needs a major revamp to be back on track. They must focus on the change starting from the world cup qualifiers after Copa America.