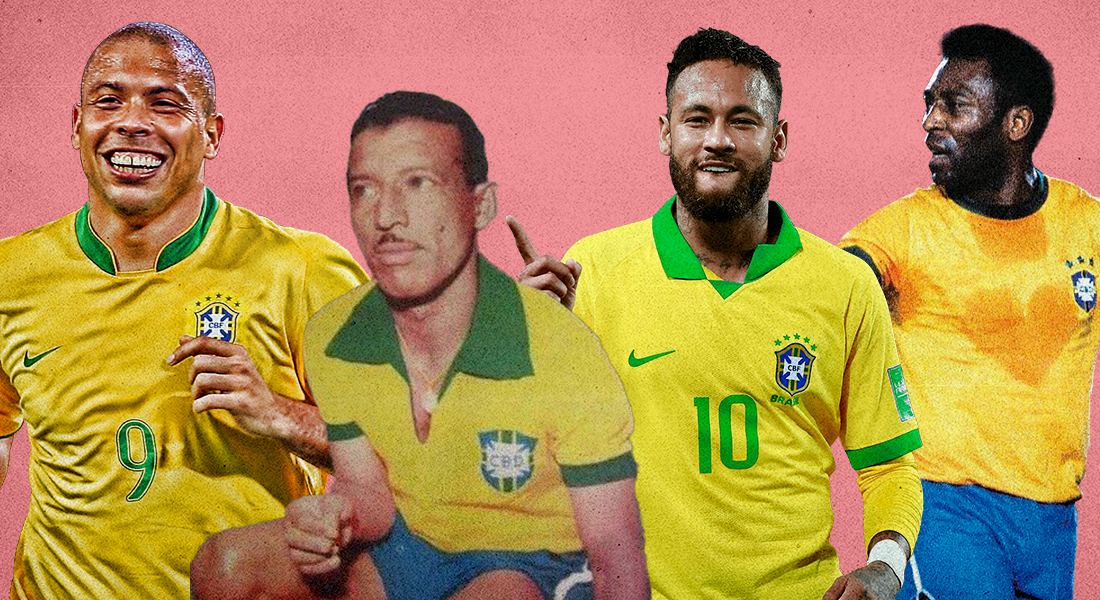 Brazil is best known for two things: Samba and Football. The South American nation has produced the best footballers time and time again. The Selecao have dominated International tournaments like the World cup and Copa America. The World Cup has been won 5 times. But at  the Copa America the best of Brazil have shown their deadly groove.

With Copa America 2020 around the corner we take a look at the 5 best Brazilians to play in the tournament:

In a Brazilian team filled with attacking talents, Cafu still stood out. His tendency to attack from the back, the overlapping runs and crosses made him a prime attacking threat down the right-hand side. Also, his defensive intelligence made him an all-round player. Occasionally he was deployed as a centre-back.

Cafu was also known for his leadership skills. He was one of the most disciplined players too. He enjoyed profound success at the club level with AC Milan.

Ademir Marques de Menezes nicknamed ‘’Queixada’’ was one of the best centre-forwards for Brazil. He formed a legendary trio with co-forwards Zizinho and Jair. The trio went on to dominate tournaments for Brazil but had only the 1949 Copa America title to show for it. A heartbreaking loss in the final of the 1950 world cup tarnished their reputation.

Ademir took part in 4 Copa America tournaments between 1945 and 1953. He scored 13 goals in the tournament and ranks joint 2nd in the all-time scoring list. His 7 goals in the 1949 tournament gave Brazil the title. He was deservedly named the player of the tournament. Ademir was ambidextrous and his jugglery with the ball made him impossible to catch.

Arguably one of the best players to play the game, it is surprising to find Pele 3rd in the list. It is down to the fact that he only played once for Brazil in the Copa America.

Edson Arantes do Nascimento nicknamed Pele was a god amongst men. His trickery on the ball, skills, passes and finishing left the world stunned. Starting his career as a wide forward he began playing more centrally or as a second striker. His pace, intelligent runs and hard work made him the complete forward.

Pele played his first and final Copa America in 1959. He was sensational at the tournament scoring 8 times. His strike in the final allowed Brazil to draw the game 1-1 against Argentina. Argentina was awarded the title as they had a better overall record at the championship. Pele was heartbroken. He was awarded the Best Player award.

He never got a chance to appear at the tournament as Brazil didn’t participate in the in till 1989.

Ronaldo Nazario or better known as R9 is one of the best strikers of all time in world football. Dubbed O Fenomeno(“The Phenomenon”) in Portuguese he was an unstoppable force on the ball.

His impact on the game was so phenomenal that he was seen as a new breed of forward in the late ’90s. Ronaldo was an immense dribbler. His extreme pace combined with skill and a sumptuous finish gave defenders nightmares. He used to position himself at the halfway line and carry the ball towards the goal and finish. After picking the all up he had one job and he did it with perfection. He redefined what a striker could do outside the penalty area.

Thomas Soares da Silva known as Zizinho hold the record for most goals in Copa America for Brazil. Zizinho also has the highest number of Copa appearances for Brazil. He represented them in 6 editions of it.

An attacking midfielder primarily he also played as a second striker and a wide forward. Known for his passing and dribbling he also had a killer finish. He was a set-piece expert and delivers perfect crosses for his teammates. No wonder he was considered the best Brazilian player before Pele. His partnership with Ademir and Jair was legendary.

His Copa bow came in the 1942 edition where he scored 2 times. Another appearance in the 1945 edition added 2 more goals to his tally. He peaked in the following editions. 5 goals in 1946 and 1949 editions followed. His goals in the 1949 edition carried them to a memorable title. Further appearances in 1953 and 1957 earned him one goal on each occasion taking the entire tally to 17 goals.

Zizinho would always be remembered for his sweet exploits in the 1949 edition.