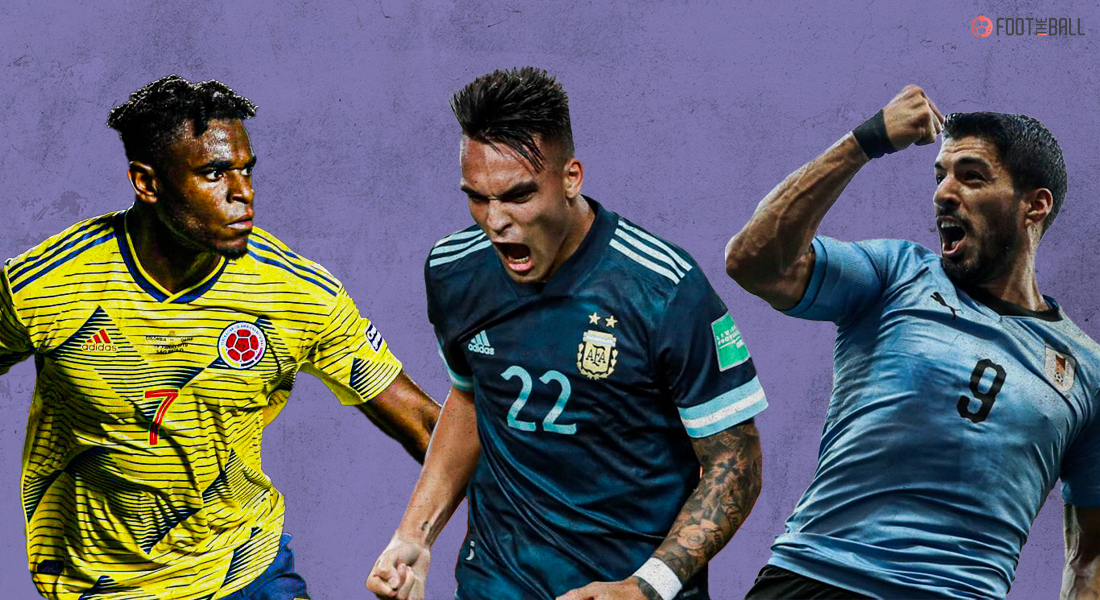 We are just a few days out from Copa America 2021, and the attacking talent in this edition of the tournament is not to be underestimated. All ten teams have a plethora of strikers up front, who will provide them with the most important thing they’ll need to win Copa America: goals.

With that being said, here are the 10 top strikers set to appear in the Copa America this summer.

Systems with two strikers may seem a little old-fashioned these days, but Antonio Conte and his Inter have proved that, through the Lautaro Martinez and Lukaku partnership, the 3-5-2 is back to Europe’s elite.

In particular, Lautaro is on everyone’s lips at present. The Argentine attacker has been an absolute machine for the Nerazzurri this term, scoring 18 times and assisting 10 times in 47 games and helping them win the Serie A title this season.

The former Racing Club man has provided versatility to Conte’s system, identifying the moments to counterattack and the ones to drop deep and join the midfield. Apart from his incredible power and speed, ‘el Toro’ reads very well when to abandon his area, when to drag the centre-backs out and when to be the reference up top. Reading of space, pace, control and finishing- four attributes that perfectly define Lautaro, who has quality and goals in equal proportion. Having scored 10 goals in 19 appearances for Argentina, he’ll be a vital asset for Lionel Scaloni’s side in the Copa America this summer.

This season, all Luis Suarez has done is make Barcelona regret their decision of selling the Uruguayan striker to their arch-rivals, Atletico Madrid in a whirlwind €6 million transfer. For Los Colchoneros, Luis Suarez has found the back of the net 20 times and assisted thrice in 31 matches in La Liga. Because of his contributions, Atletico Madrid are one win away from their first La Liga title in 6 years.

Suarez is brutal when in form. He is hard working yet skilled to deliver some of the most unbelievable goals, volleys and pieces of art you could imagine.

The 32 year old has been marvelous for Uruguay, scoring 63 times in 116 caps which is the highest in the nation’s history. His work ethic and intelligence will act as wonders for Oscar Tabarez’s side in the South American tournament.

Serie A’s Atalanta have had a tremendous season and are placed second in the league table with 1 match left and will play the Coppa Italia final against Juventus. Much of the credit for this goes to the Colombian striker, Luis Muriel who has found the back of the net 26 times and assisted 11 times in 46 matches for ‘La Dea’ in all competitions. In the 35 matches he has played in Serie A, he has only started in 16 of them.

🔥 In 15 Serie A starts the Colombian has 15 goals and 7 assists pic.twitter.com/qWnB4IZgAq

Muriel is an all-around player who can play in any position up front, whether as a supporting forward or as a lone striker. The 30-year-old is a great dribbler with a powerful right foot and a keen eye for long-range goals. Muriel, who has a good positional sense, is actually one of Serie A’s most deadly strikers and is popular for his manoeuvres in opposing penalty boxes.

Because of his pace, the Colombian is known to prevail in counter-attacks and link-up action. And hence he is one of the top strikers set to appear in this year’s Copa America.

El Matador or Edinson Cavani has been one of the top names in the best pure number 9’s for years now. Now 34, the Uruguayan isn’t at the peak of his powers but with his lethal finishing and eye for goal, he’s still very much a problem for the opposition defence.

For Manchester United this season, he has scored 15 goals and assisted 6 times in 37 outings. Only behind his fellow countryman Suarez, Cavani is the second highest goalscorer for his country with 51 goals in 118 matches.

The duo of him and Suarez has been carrying the attacking responsibility for Uruguay for many years and would be doing exactly the same in the Copa America 2021.

Another Atalanta man and Colombian joins this list. Duvan Zapata is a physical specimen. The primary explanation for Gasperini’s choice for Zapata over Muriel is strength and aerial duels. Zapata has also been tremendous for Atalanta this season, finding the back of the net 19 times and assisting 14 times in 47 matches in all competitions.

His physical features are the most appealing because, at 6 feet 2, he has the stature to cause major problems to the opposing defence.

It would be interesting to see whether Muriel and Zapata will be deployed in the attack together or will one of them come off the bench as has been the case with their club.

Another Colombian on the list and another top striker, Alfredo Morelos has been one of the stars of the Rangers’ invincible season in the Scottish Premiership. Whether goal scoring or assisting, the 24-year-old striker has excelled in both the departments with 17 goals and 13 assists in 44 outings for the Light Blues in all competitions.

With his trickery, close control and powerful runs, he possesses a unique arsenal of skills that make him a constant threat. The opposition usually has to double-up on him to prevent his progression into the box.

It would be a difficult choice to choose who to start at the number 9 position for Colombia’s boss, Reinaldo Rueda but as a collective, Colombia’s attack is stacked with three in-form strikers.

Darwin Nunez, another Uruguayan on the board, has impressed with Portuguese club Benfica this season and will most likely be seen as a backup to both Edinson Cavani and Luis Suarez.

Darwin Nunez for Benfica this campaign has scored 14 goals and assisted on 11 in 42 outings but only 6 goals in the Primeira League this season. That said, Nunez is still a golden boy. He has a stunning blend of pace and explosiveness, as well as his stunning physical strength and muscular build acts as a strength. The 21-year-old is determined and very quick to understand when and how to get his defender off-balance. He is a solid ball-carrier, dribbler and finisher. Maybe his tricks can make him over-indulgent at times, but he makes it up with his robust work ethic.

The 21-year-old Brazilian, Matheus Cunha is a star in the making. The Hertha BSC man is an incredible talent with a tremendously high ceiling. He knows where he needs to position himself in order to create advantages, and then he has the technical quality to beat rivals through one-v-ones. Through the middle or out wide, he reads each situation very well, and, apart from his vision to be a brilliant assister, in recent months he has learnt to make arrivals into the box and find the net regularly. Cunha has a brutal capacity to generate superiorities individually and a very rational occupation of spaces to exploit gaps between the opposing defences.

Although he has 8 goals and 8 assists this season and is yet to make his international debut, the Brazillian is much more than that and a serious talent.

This season might have been disappointing for Gabriel Jesus’ on an individual level, but the Brazilian is a reliable option upfront. He is multi-functional, versatile and fast. When in form, the 24-year-old is a reliable goalscorer, smart passer of the ball and devastating at full speed. He’s cool and calculating, and can play on the wing too. He can be found all over the box, both in and around it, and is always dangerous and lethal.

Jesus has an impressive resume with Brazil, having scored 20 goals in 40 outings and will be an important player to help Brazil defend their 2019 win at Copa America 2019, although he has had unproductive season as far as strikers are concerned he will be hoping to turn his fortunes around at the tournament in the summer.

The 28-year-old Alario is in the form of his life, netting 15 goals and assisting 4 in 33 matches for Bayer Leverkusen. Alario is a top forward who is powerful, quick in the air, but also technically talented and has the kind of flair one might expect from a South American.

Yet to make his international debut, Alario would offer something different for Argentina, a physical presence upfront. As far as strikers go he can play as a target man and at Copa America 2021 could prove to be Argentina’s secret weapon.