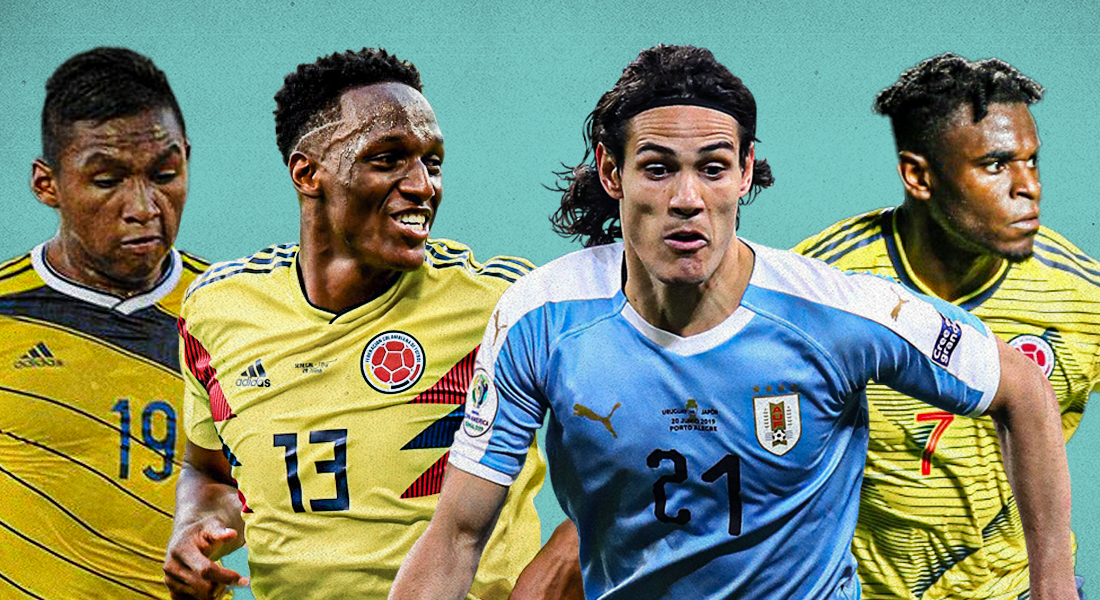 COPA AMERICA 2021: URUGUAY VS COLOMBIA, THREE KEY MATCHUPS THAT CAN IMPACT THE OUTCOME

With the group stage done and dusted, the Copa America moves into the knockout stages, with the quarterfinals beginning from Friday, starting off with a clash between the underdogs Peru and Paraguay in Goiania.

24 hours later, a mouth-watering clash awaits in Brasilia as heavyweights Uruguay face off against Colombia in the third quarterfinal fixture, with each of them having contrasting campaigns in the group stage.

And although La Celeste go into the tie as the favourites, the match will be a tight affair and we, at FootTheBall, have compiled three key individual matchups which can significantly impact the outcome of the game on Saturday.

The man in form for Uruguay, Edinson Cavani will be key for his side’s goals, given the patchy form of Luis Suarez, who has managed to score only one goal in the tournament, against Chile in a 1-1 draw. While both of them are similar strikers, Cavani offers more in the build-up and him dropping off between the lines is set to test the Colombian defence, especially their leader at the back, Yerry Mina.

Taller than the Manchester United striker, Mina will have to be alert with the movements of the Uruguayan as he can easily blindside any defender and find space to score goals. If he can manage to keep Cavani quiet with tight marking and proactiveness, he and his side can take the sting out of Uruguay’s attacks, and give Colombia an advantage.

Tempers will probably eventually rise, given the duo’s past in the 2020/21 season, which saw them clash with each other in an EFL Cup game between Manchester United and Everton. And this will make the matchup even more interesting.

Although he has featured only in one of the group stage fixtures and that too as a substitute, Alfredo Morelos is in line to start for Colombia against Uruguay on Saturday as star player Juan Cuadrado is set to miss out due to suspension for receiving two yellow cards in the group stage.

And Diego Godin will have to be at his very best to tackle this mercurial striker who has this gritty and forceful style with which he combines pace and skill, making him one of the hardest players to play against.

The veteran Godin must use all of his experience in order to keep Morelos quiet and although it might seem a herculean task, the Cagliari centre-back is very much accustomed to tackling many talented strikers throughout his career and will try and replicate the same.

Slowly, but surely, Wilmar Barrios has made himself a name in this edition of Copa America and has a chance to make the breakthrough move in his career if he helps Colombia achieve a dream run in this tournament.

Such has been the impact of the Colombian, as he is the only one of four players to have completed every game and has been a rock in the midfield which has allowed Mateus Uribe to venture forward in attack.

In what could decide the fate of the match, Barrios is set to come up against another diminutive defensive midfielder, Lucas Torreira, who has been used precariously in the group stage. Torreira’s tenacity will be much needed for Uruguay in the game on Saturday in order to tackle the energy-heavy midfield of Colombia.

Apart from going head-to-head with the opposition’s midfield, Torreira needs to bring out his passing skills as he is very much capable of finding that pinpoint pass that can split defences.