Analysing the Difficulty Level of Copa America 2021 and UEFA Euro 2020 on paper; Which one is more gruelling and why?

As footballing carnivals continue on two separate continents this summer, fans and enthusiasts are enjoying a real treat witnessing two of the most prestigious international football tournaments take place simultaneously.

In Europe, the UEFA Euro 2020 is going on at the moment, albeit a year later than originally planned.

Likewise, in South America, the world’s oldest international tournament – the Copa America – is being held in Brazil as the creme de la creme of the beautiful game come together to light up this summer across the world. 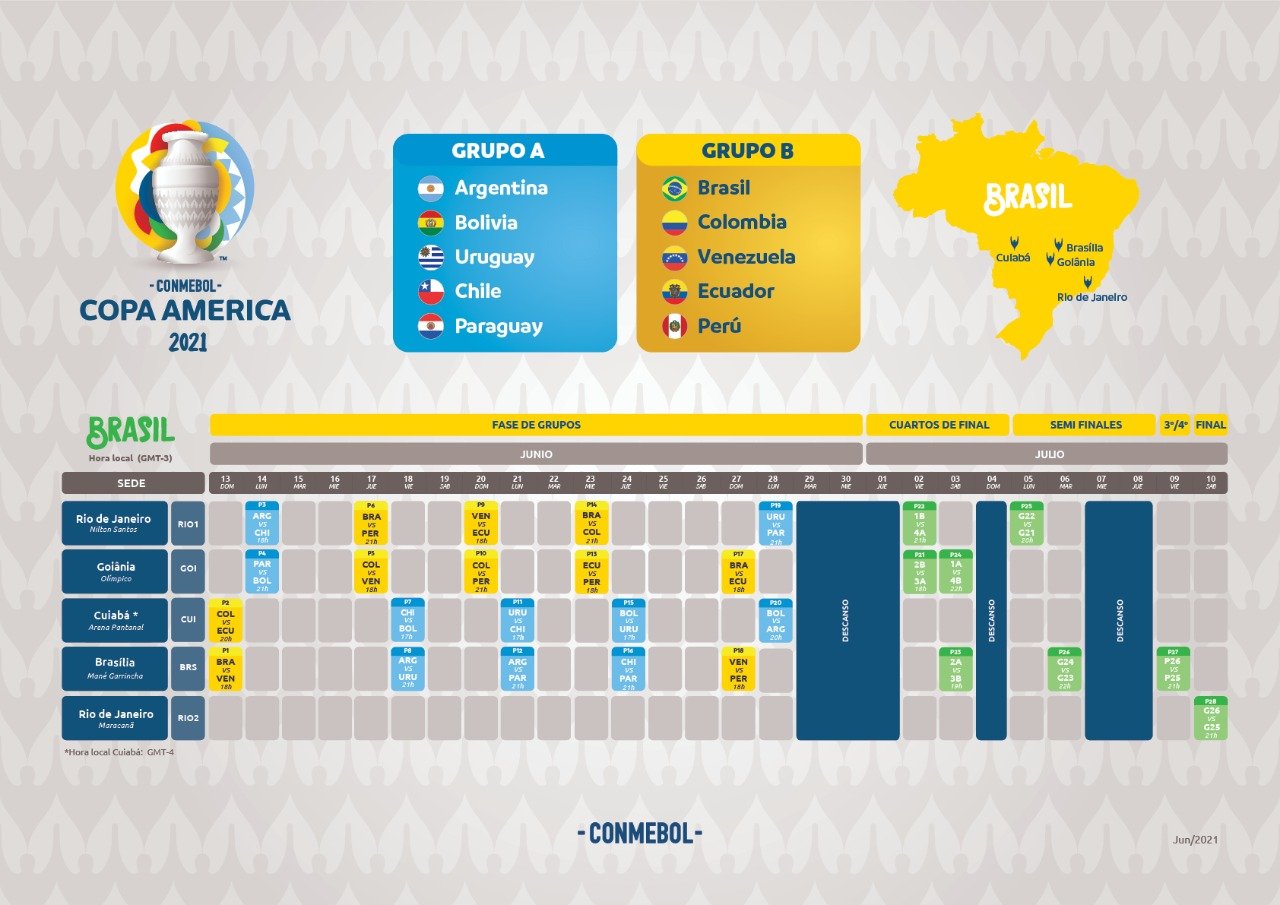 As both these tournaments are underway, FootTheBall analyses both of them in terms of difficulty on paper and tries to determine which one is seemingly more daunting and formidable for the players who are involved in them.

The Copa America 2021 is the 47th edition of the world’s oldest international tournament currently underway in Brazil.  It features 10 teams, scaled down from the original 12 after invitees Australia and Qatar withdrew earlier this year.

The teams are divided into two groups based on their geographical location – the North Zone and the South Zone. The South Zone members have been drafted in Group A and contain heavyweights like Argentina, Chile and Uruguay.

The other group – Group B – contains teams like defending champions Brazil, last edition’s runners-up Peru and Colombia among others. All the teams will be playing a minimum of 4 matches in the group stage and the top four from each group will progress to the knockout stage.

In the knockout stage, teams will enter the quarter-final stage and the two finalists and losing semi-finalists will eventually be playing a total of seven matches in the tournament before the winner is decided in Rio de Janeiro.

And this time the tournament is being held in Brazil instead of both Argentina and Colombia hosting the quadrennial event.

This means that as compared to their European counterparts, the South Americans will have to travel over relatively lower distances for matches. Also, the majority of the teams in the tournament do not even feature in the top 20 places of the FIFA rankings for international teams all across the globe.

The only teams from South America to feature in the top 20 teams on the list are as follows: Brazil (3rd place), Argentina (8th place), Uruguay (9th place), Colombia (15th place) and Chile (19th place).

As such, the quality of the rest of the international teams is quite evidently not up to European standards so to say.

Therefore, the above-mentioned 5 teams will be easily able to navigate their way into the knockout stage and even stand a decent chance of winning the tournament in Brazil next month

The only similarity between the Copa America and Euros is that the finalists and the losing semi-finalists get the chance to play seven matches across the entire tournament.

Apart from that, the Euros are a completely different ball game altogether from the South American championships.

First off, no team gets an automatic entry in the tournament. Instead, every national team has to go through a qualifying phase to book their place in the quadrennial tournament. In addition to it, the number of teams participating is more than double the number taking part in South America.

There are only 10 South American teams taking part in Copa America 2021, while the UEFA Euro 2020 features 24 teams divided into six groups of four teams each.

And apart from the winners and runners-up of each group, the top 4 third placed teams in the group stage will also qualify for the knockout stage.

The knockout stage will begin with the Round of 16 matches, culminating with the final in Wembley stadium in London on July the 11th where the European champions will be crowned.

Matches will be taking place all across Europe and as such some teams will spend a lot of time on international flights all across the continent.

For example, the Belgians played their first match of the group stage in St. Petersburg when they faced hosts Russia, but will travel to the Danish capital Copenhagen to face Denmark in the second group stage match before going back to St. Petersburg to play their match with Finland.

As such, travel will definitely be a factor in players’ performance on the pitch and given that the previous season was relatively congested as compared to ‘normal’ seasons, players’ fitness will also be tested as they don their national colours all across Europe this summer.

In addition to this factor, the fact that FIFA’s international ranking for national teams all around the world include 7 European nations in the top 10 and one will realise the level of quality and competitiveness in Europe.

European teams have dominated at World Cups too – they have won every World Cup since 2006.

European players – irrespective of the national team they represent – ply their trade in the top 5 leagues in Europe (La Liga, Premier League, Bundesliga, Serie A and Ligue 1) where the level of competitiveness is sometimes gruelling and exhausting.

Elite European clubs play in the Champions League which has been claimed by many experts and football analysts as more physically taxing and demanding than the FIFA World Cup itself.

Therefore it is amply clear to anyone who looks at this discussion a bit more closely that the Euros are definitely more difficult and gruelling than the Copa America if all the above-mentioned factors are taken into account.