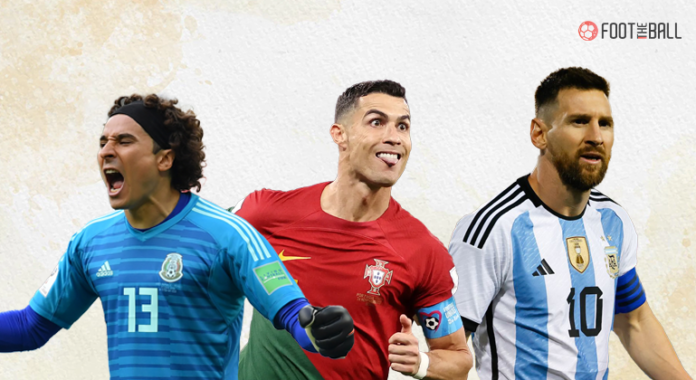 To play in one FIFA World Cup is a lifetime achievement, to play in five is a historic feat that includes you in one of the most exclusive clubs in football history. To be able to achieve this feat you not only have to be a physical anomaly but you must be able to perform at the highest level from the start of your career to the end.

Leading into this World Cup, there were only four current members in the club, by the time the tournament ends there will be eight.

These four players are Gianluigi Buffon, Rafa Márquez, Lothar Matthaus, and Antonio Carbajal. All legends of the game in their own right make up a group reserved for icons. Both Buffon and Matthaus won the World Cup with their international sides, playing pivotal roles.

Here are the four new members of the five-timer club:

One of if not the greatest players of all time, Messi makes what presumably is his final appearance in a World Cup. At the age of 35, this could be one World Cup to remember. Argentina is one of the betting favourites in the tournament, their World Cup odds are 17/2, just behind Brazil which is 3/1. Messi is also one of the favourites to top the scoring charts and win the Golden Ball for the second time.

Messi made his first appearance in the tournament in 2006 as an 18-year-old, coming on as a substitute and scoring against Serbia and Montenegro. This was historic, making him the youngest Argentine to play and score in the World cup.

The PSG forward has always been criticized for his failure to secure silverware for his country, with many in Argentina still viewing Maradona as their greatest player. With a Copa America trophy now under his belt, he will hope to cement his legacy with a World Cup.

Why is it always Neymar? 😒#WorldcupQatar2022 #FIFAWorldCup pic.twitter.com/zrkYpRrJA7

The Mexican shot-stopper has become synonymous with the tournament, his curly hair and acrobatics have endeared him to fans around the world. Ochoa applies his trade for club side Club América in the Mexican league who he also captains.

The Mexican goalkeeper is most well known for his brilliant display in the 2014 World Cup in Brazil when he was easily the side’s best player. In the group stage, Ochoa made an incredible six saves against Brazil, granting them a historic point against one of the world’s best.

The veteran keeper made his World Cup debut in 2006, making the squad as third-choice goalkeeper. Four years later he was given the number one jersey for Mexico in the 2010 South African tournament.

Like his predecessor, Guardado also plays for Mexico and will make their own history, becoming the first teammates to play together in five straight World Cups.

The Mexican captain plays for La Liga side Real Betis operating at the heart of their midfield. He initially started his career in defence but with his ability on the ball and work ethic off it, he quickly moved into the centre of the park.

Guardado made his World Cup debut against Argentina in the quarter-final in 2006. His inclusion in the starting squad was a shock and although he put in a good performance, Mexico lost 2-1. This started an unwanted tradition of Mexico not being able to make it past the round of 16, one which they will hope to break at this tournament.

At the age of 37, this is undoubtedly Ronaldo’s last appearance in the tournament. The Portuguese captain’s first appearance came in 2006 when he was just 21 years old. Since that debut, he has become the country’s all-time top scorer, most-capped player, and captain.

One of the only men who can rival Messi as the greatest player in the world, Ronaldo has had an incredible career. With five Champions League winner medals to his name, the Portuguese superstar has won everything there is to win at the club level. However, like Messi, he has failed to secure the greatest prize, the World Cup trophy.

In 2016, Ronaldo finally got his first piece of international silverware, winning the Euros after a 1-0 win against France. Since then Portugal has failed to live up to their high standards, going out in the quarter-finals of the 2018 World Cup and 2020 Euro.

This year, Ronaldo will be hoping to end on a high. With Portugal looking as strong as ever, this might be their best chance to secure the illustrious silverware. The World Cup is seen as the greatest stage of them all, where names are made and legacies formed. But it is also the last hooray for a lot of players, every player on this list will most likely see this as their last chance to secure the greatest prize.