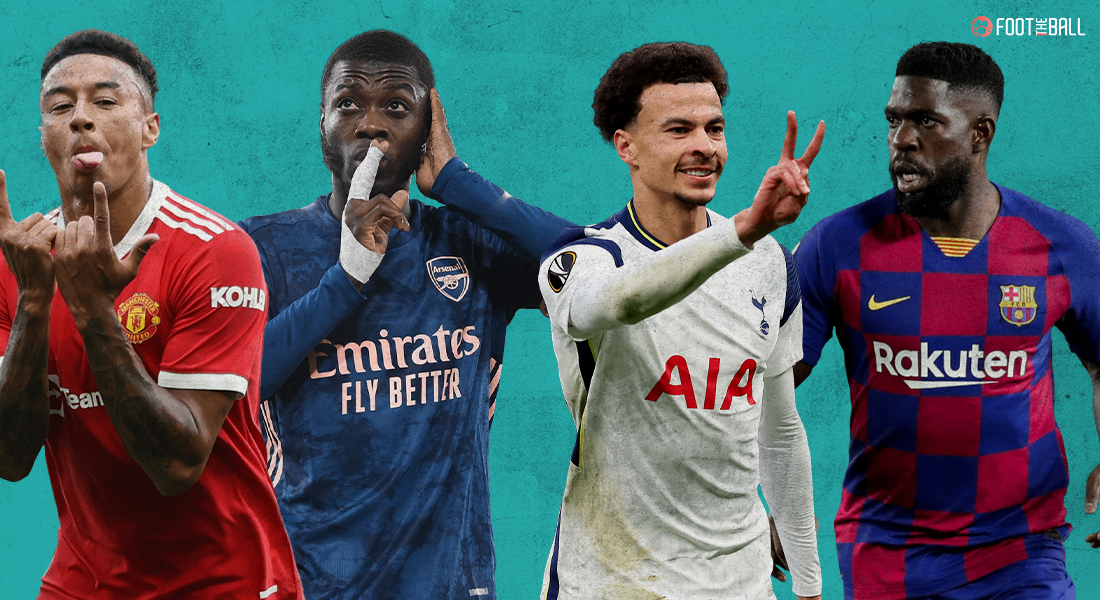 With the start of the January transfer window getting nearer and nearer, the rumour mill is getting stronger. While most clubs will be actively looking to strengthen their squads, another key facet of the month will be who all leave. Indeed, there are several players who are languishing in their present teams and desperately need a change of scenery. The reasons can be several- stiff competition, injury concerns, issues with management et al. FootTheBall looks at 10 such individuals who will be really angling for a move now.

It has all gotten a bit too hazardous for the Belgian after joining Real Madrid in 2019. The ever present problem with injuries and length fitness concerns has limited Hazard to just 30 league appearances till now. He has only managed four goals in that time and his case has certainly not been helped by any of the external factors.

The rise of Vinicius Jr, Rodrygo and Marco Asensio as the starting options has left him short of game time even when healthy. Furthermore, present manager Carlo Ancelotti has openly stated that he prefers other players over the 30-year-old right now. In that regard, it is not difficult to see Hazard leave in January, provided the right bid comes in.

Things have come a long way for Lingard since the last six months of the previous campaign. Having been on a scoring streak for West Ham United which seemingly revived his career, he looked to channel that form for Manchester United as well.

Should the England midfielder head back to East London in January? pic.twitter.com/LhzA74VOwW

Ole Gunnar Solskjaer even talked about ingraining Lingard into the lineup but with a bevy of star names ahead of him, it was hard to see how that would play out. With eight substitute appearances till now, it does look like his future definitely lies elsewhere. It might be a loan move to start with in January which can turn into a permanent move unlike last summer.

The long and short of this one is the simple fact that there is no place for Alli in Antonio Conte’s system. He has played less than an hour’s football since, with more than 50 minutes coming in the Europa Conference League. Conte’s 3-4-2-1 sees three pure attacking players with two holding/defensive midfielders behind them.

That is not to say the Alli is faultless. His star has dimmed quite a bit since the departure of Mauricio Pochettino and he registered his first goalless league season in 2020-21. It does seem like Spurs are also willing to sanction a move for Alli and spend the funds they receive on upgrading the defence and attack presently.

Another player whose career has stagnated a bit by the arrival of a new manager. Kulusevski was a vital squad player last season, starting 19 of 35 matches in Serie A. He was also instrumental in Juventus winning the Coppa Italia, providing a goal and assist in the final. However, Max Allegri is famous for his defensive approach and solidity in numbers which is stifling Kulusevski’s creativity.

“You bring that ball to the corner flag, not try to dribble everyone. This is what we need to learn.

We try to do too much, going for backheels or a solo run, it’s unnecessary and wasteful.”

🗣 Allegri on Kulusevski to DAZN pic.twitter.com/iBlc0e9SVE

Only four starts in the league tell a story, and they have come when Allegri has used a 4-2-3-1. Other times in the 4-4-2, there has been no place for the Swedish winger. Kuluseveski is a supreme talent at such a tender age and needs to be handled carefully going forward, which might mean a loan move in January.

His first match this season saw Barcelona cough up a lead twice before ultimately drawing against Osasuna. Umtiti’s form has taken a nosedive following concerns with his knee over the past two-three years. He has not played more than 14 times in La Liga since the end of the 2017-18 campaign. The fact that he was given an extremely lucrative deal in the interim has also not gone down well with the fans.

• Umtiti's entourage says that he prioritises staying at Barça but if Xavi asks him to leave he will value a offer which satisfies him sportingly and economically.

Ronald Koeman trusted him less and less as his tenure went on, though the player himself has said he would want to stay at Camp Nou. Given his poor playing performances, it is hard to see how an equitable offer will come for Umtiti. But he does need to leave Barcelona to revive his career certainly.

The inconsistency is what kills here. Pepe is a terrific player, able to drop defenders on a whim and win games single-handedly. But the problem has been those types of performance have become few and far in between. Pepe is yet to score in the Premier League this season and it does look like his game time will not be increasing any time soon.

That is because of the explosive performances from Bukayo Saka and Emile Smith Rowe on the two flanks. The pair have been excellent so far and there is really no reason for Mikel Arteta to start Pepe over them right now. Though a transfer looks very unlikely, a loan move could emerge as a serious possibility.

This one is as clear cut as it can get. Martial’s agent has publicly communicated his client’s desire to leave in January and this would be a move that suits both parties. The Frenchman is not going to be a starter in a team that includes Jadon Sancho, Marcus Rashford, Mason Greenwood alongside promising youngsters like Anthony Elanga and Amad Diallo.

“He just needs to play. He doesn’t want to stay in January and I will speak to the club soon”. pic.twitter.com/R4e5C8T96T

His critical loss in confidence and injury worries has seen his goal output dry up. Moreover, interim manager Ralf Rangnick has also spoken of not forcing wantaway players to stay at the club, citing its heritage and stature. Several mid-table teams can use Martial’s services and no doubt there will be some offers for him in January.

Let’s get one thing straight- Tolisso is not up to Bayern Munich’s starting standards. In fact, he has made a combined 18 starts in the league since the start of the 2019-20 season. The presence of Leon Goretzka, Joshua Kimmich, Thomas Muller, and now the rise of Jamal Musiala and signing of Marcel Sabitzer will prevent Tolisso from getting more chances.

Roma and coach José Mourinho are interested in a January move for Corentin Tolisso. Bayern would be willing to sell the Frenchman in winter if they receive a suitable offer [Podcast Bayern Insider, @cfbayern, @altobelli13] pic.twitter.com/l738J2ywUn

He has benefited to an extent with the first two remaining out of action presently and Sabitzer’s poor start to life at his new club. However, once everyone is healthy and firing, Tolisso’s game time will decrease once again. So it makes sense to allow him to sell him in order to shore up finances and chase other targets.

Unlike Umtiti’s story, Coutinho has never properly settled at Barcelona since he made the move in 2018. Having to play out of position as a wide midfielder/attacker to accommodate Lionel Messi, he never got to show his full potential that was evident during his time at Liverpool. Ironically, his best season came in 2019-20 on loan at Bayern Munich where he had 20 goal contributions (11 goals, nine assists) across all competitions.

❗Philippe Coutinho, Sergiño Dest and Luuk De Jong are not part of Xavi's plans and the door is open for them to leave in the winter transfer window.#FCB 👥🚫

Ronald Koeman overlooked Coutinho quite a few times and his persistent injury problems also did not help his cause. Xavi has provided a few chances to him but his performances have been disappointing as he continues to play on the left in a 4-3-3. The rise of several teenagers has further rendered him expendable and another loan move beckons.

It was a sour summer for the young, versatile player. After his move to Everton collapsed and he posted on his social media that he wanted to “go where I’m wanted and where I’m gonna play.” Arteta keeping Maitland-Niles seemed to be part of a grander plan where he can become a regular feature off the bench.

That has not been the case. Two starts from eight appearances in the league tell the story of a player deemed surplus to requirements. Maitland-Niles has not played a single minute over the past three matches and he will definitely be looking to leave in January. Hopefully, common sense will prevail and everyone at the club can see how it will benefit overall.