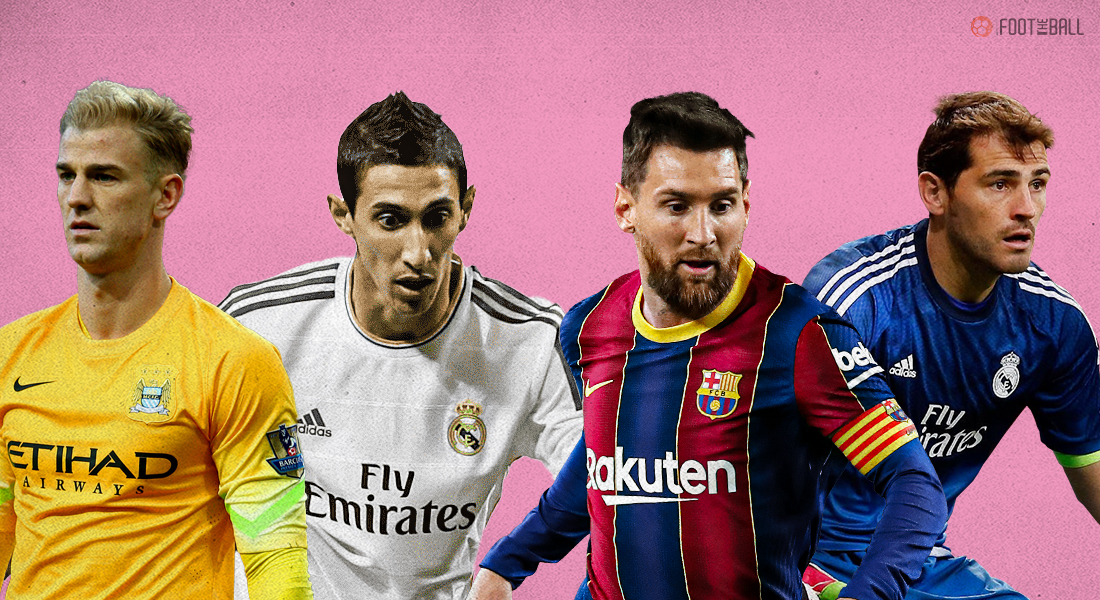 THE STARS WHO DEPARTED FROM THEIR CLUBS AGAINST THEIR WILL

Lionel Messi’s departure from Barcelona was not without a fair amount of subplots. The club’s mysterious assurances since the end of the season, “progressive” talks between Joan Laporta and Javier Tebas, their opposition to the CVC deal proposed by the league were just some of the most high-profile ones.

Leo Messi: “I’m really sad because I didn’t want to leave this club. I love Barcelona and I wanted to stay, my contract was ready. I did everything in my possibility to stay” 🔴 🔵

However, the one thing that was clear from Messi’s parting press conference was that he ABSOLUTELY did not want to leave. Having spent 21 years at Camp Nou, it was extremely turbulent for the 34-year-old to move on, especially when he himself had totally wanted to stay.

Lionel Messi: “I was convinced to stay here at Barcelona. This is my home, our home. I wanted to stay at Barça and it was the plan… and today I’ve to say goodbye after my entire life here” 🔴 🇦🇷

The final decision was ultimately not in his hands and in that regard, FootTheBall looks at 10 players who could not continue with their parent clubs despite their wanting to do so.

Starting with the Argentine himself who had been led to believe that he would be staying. It is no surprise that Laporta had been confident of keeping his star and said as much over the past few months. Yes, he acknowledged that there were certain technicalities to be taken care of but who would have thought that Messi will actually leave?

La Liga’s financial strictness made the deal financially impossible in the end, with the house of cards crashing down over just one lunch for Messi. Nevertheless, he leaves the Blaugrana as their all-time top scorer, appearances holder, assists provider, and with 35 trophies to boot. Furthermore, he is also La Liga’s all-time top scorer as well as the most prolific scorer in UEFA Champions League history.

After 1️⃣7️⃣ years, Lionel Messi's Barcelona career is over 😨

He finishes with 1,003 goals + assists in 778 official games in all competitions.

His impact on football and around the club cannot be matched no matter who comes next and he leaves as a living legend for his legions of fans. Though it was his wish to carry on, the dream is over for at least now.

Coming to Barcelona’s arch-rivals, Real Madrid and their dismal treatment of club legend Iker Casillas. The boyhood Los Blancos hero who spent 25 years along the various levels of the team established himself as one of the best goalkeepers in the world since his ascent to the senior team.

Casillas was the unanimous number one for Madrid as they swept trophies left and right while he still holds a host of records in the Champions League. However, the dynamic changed in 2012 after some high-profile clashes with then-manager Jose Mourinho. Casillas was benched by the Portuguese and that really was the beginning of his time’s end.

Despite helping the club win La Decima in 2013-14, he was forced out in 2015. Casillas’ parents slammed president Florentino Perez who allegedly “forced him out” and put him under “psychological pressure.” His tearful press conference before joining Porto lives long in the memory of the club’s faithful as something could have easily been avoided with San Iker.

The German playmaker is renowned for his intelligent gameplay and sumptuous passes, having a level of vision on the field that few can match. Ozil was instrumental in Germany winning the World Cup in 2014 as well as ending Arsenal’s trophy doubt with the Gunners’ FA Cup victory the same year.

1006 – Since he made his league debut in August 2006, Mesut Ozil (1006) is the only player to have created over 1000 goalscoring chances within the big 5 European leagues. Class. pic.twitter.com/epqlZHgO3Y

He was a serial assists provider and though often chided for his low defensive workrate, had all the makings of a Gunners hero for years to come. That did not materialize and he was soon frozen out of the squad over his last two years with the club. Ozil’s closeness with the Turkish president Recep Erdogan, noted in the West for his regime’s crackdown on human rights issues, was not received fondly in England.

Furthermore, his criticism of China for their treatment of Uighurs saw the club distance itself from their star. Having not played since the restart of the Premier League in 2020, left out of the squads for the 2020-21 league and European campaign, he departed for Fenerbahce that same year.

The England shot-stopper was a key figure in Manchester City’s rise as a Premier League super power in the early 2010s. Hart won two league titles as well as the Golden Glove four times in five seasons before the arrival of Pep Guardiola in 2016. The Catalan dropped Hart in favour of a goalkeeper who is more adept with “their feet” as has been the norm at his previous clubs.

"He didn't have a problem with me as a goalkeeper, there was never a crossed word between us. He saw what he needed for the future and that wasn't me. That is what is it. It's been kind of dragged on…"

Hart criticized Guardiola for considering Hart not his type of keeper. Furthemore, his poor showing at Euro 2016 had observers fearing for his status as number one. All of it started a steep decline for Hart in terms of solidity and game time. He had loan spells with Torino, West Ham, Burnley, Tottenham where he became infamous for some high-profile errors and shaken confidence. He joined Celtic for the 2020-21 season.

The Uruguayan hitman has been a prolific goal scorer all over his career and his numbers at Barcelona speak for themselves. He racked up almost 200 goals during his six-year stay at Camp Nou and the way he left the club shocked quite a few people. Suarez was told before the start of the 2020-21 season that he was no longer needed by manager Ronald Koeman which was supported by then-president Josep Bartomeu.

Luis Suarez was so hurt about the way Barcelona handled his departure from the club it brought him to tears. pic.twitter.com/SwewEo1bGQ

The lack of disrespect shown by the hierarchy prompted Lionel Messi, close friend of Suarez, to speak out about how “You [Suarez] did not deserve for them to throw you out like they did.” Nevertheless, it was Suarez who came out on top as his Atletico Madrid team won La Liga with the 34-year-old netting 21 goals over the league season to show he still has plenty to offer.

Jaap Stam made it 𝘀𝗶𝘅 🙌

His three seasons at the club suddenly came to an end in 2001 when he transferred to Lazio. At the time, it was felt that this was due to some of his statements in his autobiography, but the truth was far simpler. Stam himself explained later on that his departure was due to “budgetary” constraints at the club and the Red Devils could not refuse the offer to buy him.

On this day 2001 Jaap Stam signed for Lazio.

Stam arrival in Rome was a big shock to Man United fans. The blame was rumoured to lie with Stam's autobiography which heavily implied that Ferguson had tapped up Stam before he was signed from PSV, which Fergie was furious about. pic.twitter.com/Je9f4IAl9U

Furthermore, Alex Ferguson felt that the player was past his prime at the age of 29 which he admitted was “an error.” Not quite the Messi situation of now, but still it was a big loss to United back then.

The PSG defender is an iconic figure at his former club with whom he became one of the best defenders in the sport. His leadership skills and commitment to getting his job done has been universally praised as he became a serial winner with club and country. Ramos’ departure was about as close to Perez discarding him as it came.

After 16 seasons, Sergio Ramos will leave Real Madrid. End of an era. pic.twitter.com/0rMUv52Kch

After 16 years with Madrid, he was expected to renew quite easily before this season. However, Ramos said that he asked for a two-year extension while the club offered him only a one-year deal. Despite that, he stated that he had accepted the club’s deal but was told that time had expired to sign. That is certainly a bizarre and sad way to treat your talisman and captain who had clearly wanted to stay for many more years.

The striker was one of the best in the country during his days at Newcastle United. Carroll scored 19 goals in all competitions during the 2009-10 season for the Magpies and started the next season scoring 11 in 19 matches till December. This is where the situation gets murky. According to the club, Carroll handed in a transfer request after an initial bid from Liverpool was rejected and hence the subsequent offer was accepted.

📅 2011: Liverpool sign Andy Carroll from Newcastle for a record-breaking £35m.

The player tells a different tale. He alleged that Newcastle had denied giving him a new contract and urged him to accept Liverpool’s offer by handing in a transfer request. Furthermore, Carroll stated owner Mike Ashley could not refuse the money and he himself wanted to stay very much.

Andy Carroll since he returned to Newcastle:

Steve Bruce has confirmed he has left the club.

His subsequent time at the Reds, West Ham, and back with the Magpies was blighted with injuries and poor form which restricted him from reaching his full potential.

The fleet-footed winger has been lighting it up for PSG over the past six years after his terrible solo season with Manchester United. However, the way he transferred to the Red Devils left the Argentine hurt and dismayed. Di Maria was an integral fixture for Los Blancos helping them win La Liga and the Champions League apart from the cup competitions.

He was clearly committed to continuing with Madrid for longer who had other plans. The club signed James Rodriguez in a big money move which meant a lack of gametime for Di Maria was in the offing. He was quickly shunted to England despite his contract extension signed in 2012 keeping him at the club till 2018.

Upon joining United, he penned a letter to Real Madrid fans where he said how “that was never my wish” to leave and “they [the board] always wanted to place the initiative on me for leaving the club.” Clearly not a happy farewell.

The Brazilian joined Barcelona in 2018 and played regularly in the two seasons he was with the club. However, last year he was involved in a swap deal with Juventus’ Miralem Pjanic which brought in some much needed cash for the club’s battered finances. Arthur was not at all happy with the deal and went on vacation, failing to report for the season’s restart in 2020.

LATEST NEWS | Agreement with @juventusfcen for the transfer of @arthurhromelo

In spite of warnings from Barcelona to finish the season with them, his feud with then-manager Quique Seiten who commented that the player was “not the first player who signed with expectations who didn’t bear fruit.” That did not go down well with Arhur’s camp and he soon moved on to the Old Lady where he just finished an underwhelming debut season.