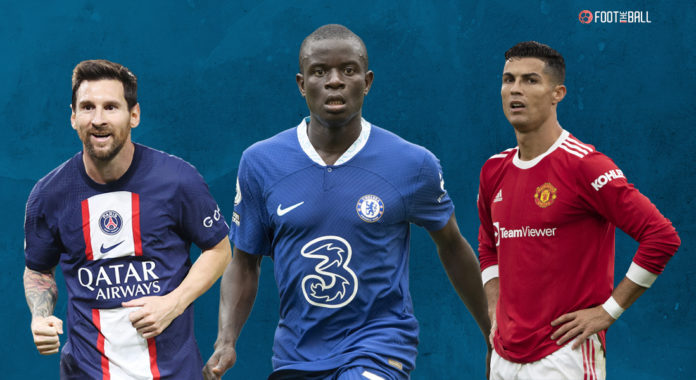 From Cristiano Ronaldo to Lionel Messi, both footballing legends have switched clubs in their career. At the time, no matter how surprising it was, even the ever-so-loyal Lionel Messi left Barcelona to join Paris Saint-Germain last season. This just goes to show how important transfers can prove to be in the journey of professional football. They are looked at as a massive career point that comes with the challenge to adapt to a completely new environment.

It is always a big day when a top player joins an elite club. However, when that contract is at its end in its final season, matters can get heated. The club either tries to sell that player for a reasonable amount to another club in the last three transfer windows before the contract ends or the club begins new and improved contract negotiations with the player.

In 2023, many big names playing in Europe’s top five leagues will reach the end of their contract and become free agents. FootTheBall takes a dive into the biggest 10 free agents next year in the summer of 2023.

The seven-time Ballon D’Or winner will consider his future at the French club only after the 2022 World Cup in Qatar. After his unexpected exit from FC Barcelona at the end of the 2020/21 season, Messi looked worn out at PSG. Away from his true heart in Catalonia, he didn’t deliver to expectations after several disappointing performances.

Messi still managed to win the league title, scoring 6 times and providing an impressive 15 assists in the league. The Argentine maestro is starting to fit well in Paris with 4 goals and 7 assists already in just 8 appearances this season. Messi has indicated a desire to extend his contract at the club at the most for another year till 2024, however, he is in no rush and will make the decision post the 2022 FIFA World Cup. Only time will tell where we see him next season.

▫️ PSG told Messi they are ready to offer a contract until 2024, in case he wants to stay.

▫️ Been told Messi will think about his future ‘only after the World Cup’. pic.twitter.com/OGUZYgHtsX

Cristiano Ronaldo returned to Manchester United at the beginning of the 2021/22 season. It was an overwhelming day when he returned to his boyhood club after 12 years and even scored a brace on his debut.

However, there was a crisis going on at the club, with disappointing performances from the players and switching of managers. Ronaldo didn’t have a good season to his standards in terms of silverware, despite scoring 18 league goals and being one of the club’s best players last season. Manchester United failed to qualify for the Champions League which made Cristiano want to leave the club. However, with no club being able to buy the Portuguese legend and Erik Ten Hag saying that he is not for sale, Ronaldo stayed.

He recently scored his first goal for the club this season from the penalty spot in the Europa League against FC Sheriff. It depends on the club, whether they manage to qualify for the Champions League and have a good season, if Ronaldo renews his Manchester United contract.

N’Golo Kante’s current contract at Chelsea will expire in the summer of 2023. After signing for Chelsea from Leicester City in 2016, the French midfielder then signed a fresh five-year contract back in 2018 and it is coming to a conclusion at the end of the season. It remains to be seen what Kante’s next step will be, but the winds of change have blown through Stamford Bridge in the last six months and he has been linked with some of Europe’s elite, including Barcelona. Kante hasn’t been involved in Potter’s Chelsea squad yet this season and his role has significantly dropped after being out with a hamstring injury. He has contributed significantly to the club and it is interesting to see where he ends following this season.

Luka Modric’s Real Madrid contract was set to expire in 2022 but the Croatian midfielder signed a one-year contract extension in June. The current contract is set to keep the 37-year-old at Madrid until the end of the 2022-23 season but there have been suggestions that there is an option to extend the deal till 2024. The Croatian has been playing very well for this current Real Madrid side, being one of their best players last season.

Roberto Firmino is playing in his eighth season at Liverpool and it looks like the 2022-23 campaign may well be his last with the Reds. The Brazil star is one of the old guard at Anfield, but, despite being in his thirties, he has had a fire lit under him with the big-money arrival of Darwin Nunez. Firmino’s future will ultimately depend on how Liverpool’s season pans out. So far, Liverpool haven’t been playing to the best of their ability. The Brazilian contributed significantly to the Red’s 9-0 victory over Bournemouth this season.

Toni Kroos has been nothing less than an engine in Real Madrid’s midfield since joining the La Liga club from Bayern Munich. But now it looks like the German midfielder’s eight-year-long stay is set to end at the end of the season. Kroos will be 33 come the end of the campaign and Madrid already look to be planning for the future, with the arrival of a number of young midfielders.

Ilkay Gundogan joined Manchester City from Borussia Dortmund in 2016 and has experienced a stellar stint in the Premier League so far. The four-time Premier League champion has been extremely useful in Pep Guardiola’s midfield who was the Spaniard’s first signing at the Etihad, but he could be on his way out if City do not grant him an extension to his contract, which expires in June 2023. The German international has contributed significantly over the past couple of seasons and has had a good start to the current Premier League campaign as well.

Karim Benzema has been in such incredible form for Carlo Ancelotti’s Real Madrid that his exploits have thrust him firmly into the discussion for the 2022 Ballon d’Or. However, the contract extension he signed in 2021 is set to expire at the end of the 2022-23 season. There are talks of an imminent one-year extension for the French striker, but that move is still pending official confirmation.

The England international forward will be a free agent by the summer of 2023, with the contract he signed in 2019 nearing its expiry date. However, United can trigger a one-year extension. Rashford’s last contract extension came with more than one season left to expire. With only a few months left this time around, it will be interesting to see if the club decides to do something about the situation in January. He has started the season well for the Red Devils and it will be interesting to see what the future holds for him.

Atletico Madrid goalkeeper Jan Oblak has a contract with the Liga club that ends in the summer of 2023. Widely regarded as one of the best shot-stoppers in the world, there would be no shortage of suitors for his signature, even though Atleti boss Diego Simeone will be keen to keep hold of his asset.