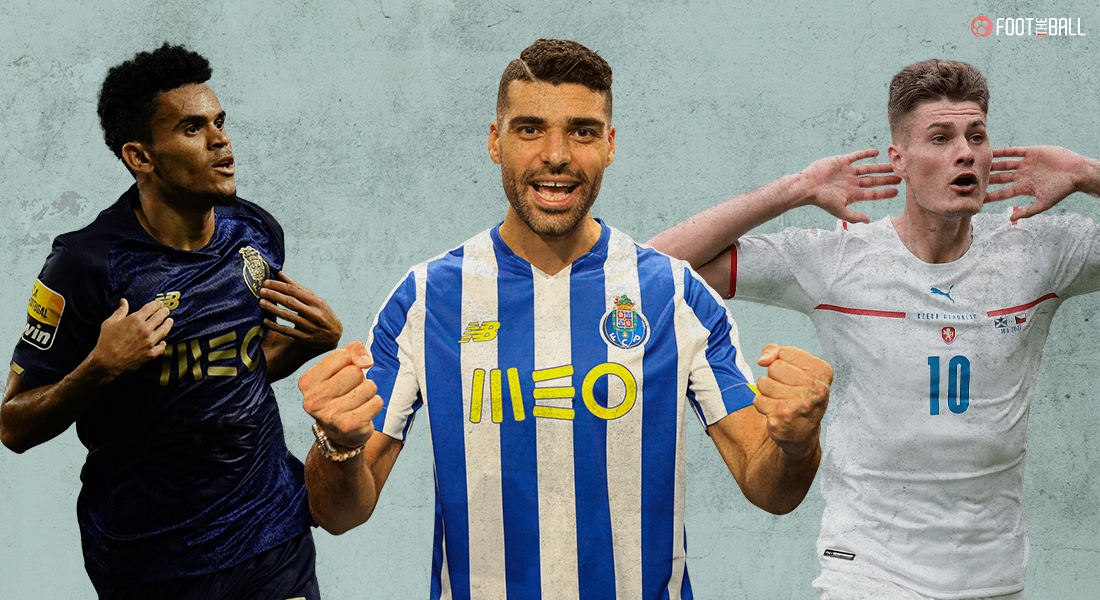 2021 has been a great year, with no shortage of amazing and eye-popping goals. With a dense run of fixtures and two international tournaments, fans were treated to all kinds of golazos and stunning strikes by their favourite players. FootTheBall looks at the top 10 goals scored in the calendar year, in no particular order. Spoiler alert: some of the goals on the list have also been featured in the FIFA Puskas Award shortlist as well, further enhancing their status of beauties.

One of the most ingenious goals scored this year, and one that really stands out among the rest. In the North London derby, no less. A long cross from the right came to Sergi Reguilon on the left, who passed to Lucas Moura inside the penalty box. The Brazilian’s simple pass to Lamela was short, who had already overrun it.

They should've also given the Best Goal Reaction award to Sergio Reguilon 😂 pic.twitter.com/8UVHlnqjta

But since there were no covering defenders as well, it allowed the silky technician to come onto the ball and strike it first time with a delightful rabona that took everyone by surprise. Though they would ultimately lose the game, this goal remained long in the memory and truly merits its place as one of the very best.

Another spectacular effort in a losing effort, which means the goal stands out even more. Juan Cuadrado’s perfect cross from the right evaded the congregation of players in the middle, which left Diaz with a little bit of time and space. With the ball dipping in, Diaz executed a thunderous bicycle kick that caught Alisson totally by surprise.

Though the match would end in controversial fashion surrounding Brazil’s two goals, nothing can take away the shine away from Diaz’s moment in the sun.

From one bicycle kick to another. The blueprint followed much the same as that of Diaz’s goal. A raking cross from the right made its way to Taremi inside the box. The burly striker immediately launched into a first-time strike that left Edouard Mendy in goal completely stranded as the ball nestled into the opposite side from where Taremi had shot.

Mehdi Taremi scored one of the goals of the season for Porto, but it wasn't enough, as Chelsea advance to the semifinals for the first time since 2014 🔵 #UCL pic.twitter.com/9aQGTyFfQk

That goal eventually ensured Porto finished as 1-0 winners on the night, though Chelsea won the overall tie on aggregate of course.

One of those freak cross-cum-shot that heads directly into the net. Jumaa, a veteran left-back who does not score many, attempted a first time ball into the middle from a crossfield pass. Only he can know whether he meant what happened next, but it does look unlikely to time it so well.

Jumaa’s delivery sailed right over the opposition goalkeeper instead of heading into the middle as a cross normally would. The goal secured a thumping 3-0 win for Jumaa’s side as they moved into the Ooredoo Cup final.

The occasion was certainly perfect for a goal of this magnitude to settle the game. With the Foxes aiming to win their first ever FA Cup, one of the meanest defences in the Premier League stood in their way in the form of the Chelsea. The game was a cagey affair with the Blues having the better chances, but Tielemans took his in the 80th minute.

Picking up the ball past the centre circle, he carried it for a few steps before unleashing a rocket from more than 25 yards out that sailed past Kepa Arrizebalaga in goal. It was enough to secure Leicester’s momentous victory come the final whistle.

This one has gone under the radar in the mainstream media but is the best solo goal on the list and year. Coming in Ligue 2 back in April, Hein’s goal is a true testament to perseverance and skill. It starts with Hein carrying the ball directly at the opposing backline, where he side steps the first defender who comes to stop him. With both ball and player inside the penalty box, a few sturdy challenges came from behind which Hein did well to block off with his body.

Gauthier Hein goal for Auxerre vs Chamois Niortais in Ligue 2 yesterday. Part of it looks like the film has been reversed! 🇫🇷⚽️ pic.twitter.com/dMGBSGUgEq

By this time, another couple of defenders had come to the party but Hein pulled off a brilliant stop-and-turn that left them bamboozled. He went onto strike the ball past the goalkeeper one-on-one and earn a Puskas nomination too.

The goal of Euro 2020 that really came out of nowhere. In a group-stage encounter against Scotland, with the Tartans attacking, the ball was cleared upfield in the hopes of finding Schick who was the lone man. There was only one defender covering the striker and it looked like a footrace was about to ensue.

However, Schick had other plans as he came running onto the ball and curled a speculative shot towards goal from behind the centre circle. David Marshall in goal had no time to get back and keep the ball out as it sailed over without hindrance. It became the furthest goal scored at the Euros in decades, and inspired numerous discussions on angles and physics and timing et al.

Unlike most others on the list, there are two incredible parts of this goal. Celina’s first-time touch to control a long ball over the top was perfect, with three defenders near him. Celina dribbled a bit before chipping the ball from outside the box, leaving the goalkeeper hopelessly stranded out of position.

Won't see many better than that in League One 🔥🔥🔥

The first thought that comes to mind when seeing the strike is shades of Eric Cantona’s famous moment back in the day. It is sad that the goal came after the nominations for the Puskas had already been declared, otherwise it would surely have been a strong contender.

A side-footed…chip? Is that a thing? Well, Tielemans surely made it look like so. Manchester United made a defensive lapse, allowing the Foxes to win back possession near their penalty area. Tielemans positioned himself right at the tip of the box, and swung his right foot first time at the ball as it came to him from the side.

This was not a power shot, this was finessed to the highest level. Tielemans’ almost gentle strike went right into the far corner of the goal, looping over David De Gea who understood little of what happened.

The latest in the list, and again, a goal that left many in the stadium thinking what just happened. Calhanoglu has been performing superbly for the defending champions, and with Roma coming to visit, he added yet another strong showing. His noted supremacy from set-pieces is well documented and so it proved once again.

Taking a corner, Calhanoglu outfoxed Rui Patricio at his near post as he went directly for goal. The ball snuck in between the goalkeeper’s legs from a very tight angle as Inter went on to a thumping victory.