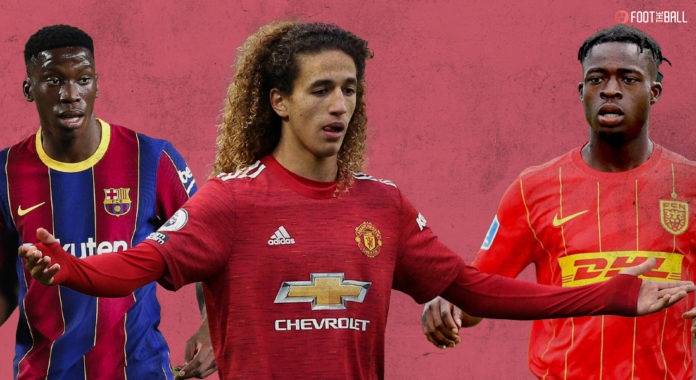 The 2021 AFCON is finally set to get underway on January 9, after all the on-field and off-field drama surrounding it for the past year. Having been pushed back due to the COVID threat, the original hosts (Ivory Coast) were bumped onto the next edition to accommodate Cameroon, who missed out in 2019.

Then came the unending tussle between European clubs and the respective national federations with the former ever reluctant to release players for the tournament due to it clashing with the domestic schedule. Now that everything is ready, with the hosts taking on Burkina Faso in the tournament opener, FootTheBall looks at the top-five youngsters taking part.

Possibly the most exciting of the lot, due to his flashy playing style and exciting talent, Sulemana is ready to take the AFCON by storm. The 19-year-old attacker/attacking midfielder has eight goal contributions (five goals, three assists) across all competitions already in his debut season with Rennes.

What has really made Sulemana stand out is his willingness to carry the ball and take on defenders all the time. He had 4.53 dribbles completed and 8.52 progressive carries (both P90) over the past year, ranking in the top 99th and 88th percentile respectively for players across Europe.

Sulemana already has seven national team appearances, and is surely going to be one of the first names on the team sheet. He is already being scouted by top clubs and will not be long before he makes the move up from Rennes.

A player who has been garnering attention for quite some time now with his exploits in Premier League 2 for Manchester United. Mejbri is touted as one of the most skilful players in his division, regularly on the scoresheet and possessing tons of tricks. He had nine goal contributions last season (four goals, five assists), making his senior team debut back in May.

However, it was only at the recently concluded FIFA Arab Cup where the 18-year-old really burst onto the scene on an international level. His dazzling style caught the eye as unfancied Tunisia made it all the way to the final, losing to reigning AFCON champions Algeria. No doubt he and the country will be looking to replicate the same form on a grander scale this time around.

There was a modicum of surprise when Spurs signed the 19-year-old relatively unknown central midfielder from Metz last summer.Sarr remains on loan there where he has been a regular over the past two seasons. He is always looking to get on the front foot from the middle of the park as evidenced by his 5.77 progressive carries and 2.25 shot-creating actions (both P90) over the last year.

He is still a newbie on the senior international level, with just three appearances so far but he will be key if Senegal are to reach the latter stages. Sarr will have two of the best forwards of the continent, in Ismaila Sarr and Sadio Mane, to supply his passes to which can result in a lot of goals as the tournament progresses.

It is an exciting time for Gambia and its footballing community with this AFCON set to mark their debut. One of the key players for the nation’s first step into unknown waters will be 20-year-old Darboe, who has been mentored by Jose Mourinho this season. The defensive midfielder came through the ranks of Roma, and is a regular in the Europa Conference League.

🇬🇲 Ebrima Darboe (19) had his best start yet for @OfficialASRoma.

Only his 4th AS Roma start. 🐺 pic.twitter.com/P1PcMz3TNt

Darbo has averaged a passing accuracy of 95% over the past one-and-a-half years, eager to win the ball back and close down spaces for the opponents. Granted he has been pretty limited in terms of league action but Darboe will be a key asset for his national team. Given the environment he has been around, the other squad members will certainly look to apply some of  that knowledge on the field.

No matter what transpired last summer surrounding his exit from Barcelona, there is no denying the abundance of talent that Moriba carries. The central midfielder, now at RB Leipzig, has only been able to make five appearances so far but the stats are clear on how important he will be for Guinea. Moriba ranks in the high 90th percentile for dribbles completed (1.80), progressive passes received (4.58), and pressures (27.60) all across P90.

🇬🇳 Ilaïx Moriba made his Guinea debut two days ago.

Though the sample size is limited given he has only played 649 minutes of senior team football over the past 18 months, Moriba will serve as the linchpin for his national side. He will have Amadou Diawara and Naby Keita to support and learn from as he navigates the travails of a first major tournament. Moriba will know that some strong showings at the AFCON will once again remind onlookers of his total potential and boost his chances of playing more minutes.