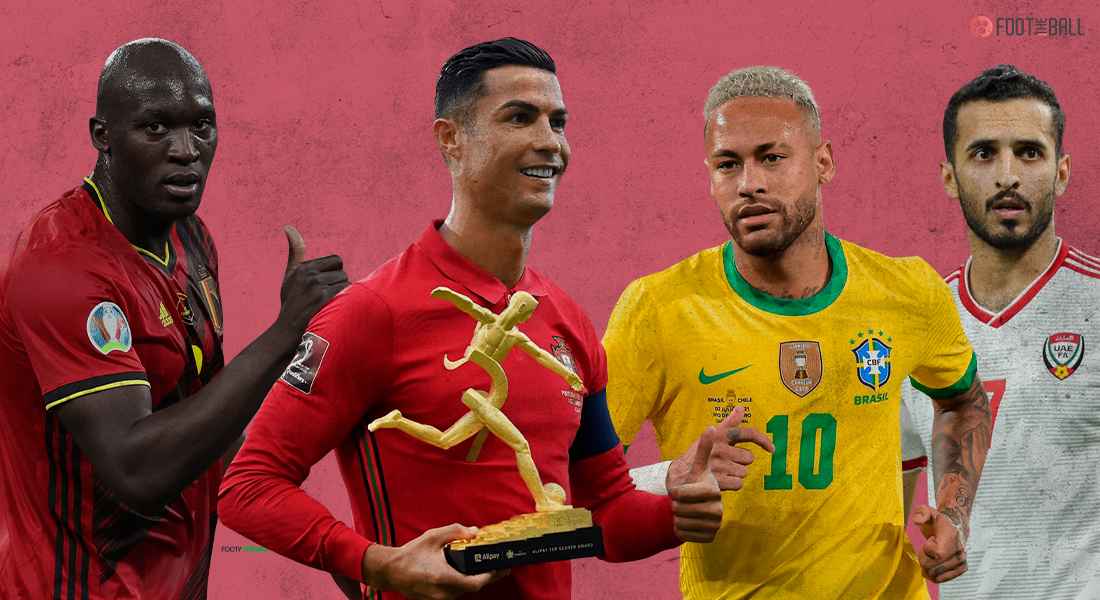 International football never fails to amaze us with new records being set every time players don their national kits. In the most recent edition of the international break, multiple records were broken by players all around the world. None would be bigger than Cristiano Ronaldo becoming the men’s highest international goal scorer of all time. However, in the same international break, few others are also hot on Ronaldo’s heels to catch up his scoring record or even better it.

Ronaldo entered the international break level with Ali Daei on 109 goals. He got the chance to create history from the penalty spot against Ireland. But the legendary Portuguese striker missed and was made to wait for his moment. With Portugal trailing 1-0 till the 89th minute, tensions were rising. But a man for clutch goals, Ronaldo stepped up again. He headed in a Goncalo Guedes cross to score his 110th international goal and be the sole holder of the record. Deep into the stoppage time, Ronaldo once again leapt high to score the winner and his 111th goal for Portugal. He wrote his name in history books with a special performance.

FootTheBall looks at five players who could catch up with Ronaldo as the highest international goal scorers.

Romelu Lukaku continued his sensational streak for Belgium by netting against the Czech Republic in the recently concluded World Cup qualifier. The Belgian striker now scored 50 goals in his last 50 appearances for the Red Devils. The goal also marked his 100th appearance for Belgium.

Lukaku already has scored more than half of Ronaldo’s goals at only 28 years of age. But he was quick to play down the comparisons with Ronaldo and called it an absolute time waste. The Chelsea striker knows he has to take it one game at a time and look to score as many as possible. Obviously, his priority would be winning the World Cup with Belgium in 2022 and fulfil the Golden Generation’s legacy. With the support of his incredible teammates, he can keep adding many goals to his tally.

An international trophy was the last piece of the puzzle missing from Messi’s collection. With an incredible performance at this summer’s Copa America, he has added it to his coveted trophy room. Messi scored four goals and assisted a further five teams to win the MVP trophy at the tournament as well.

With those goals, his tally rose to 76 goals and was a goal shy of matching Pele’s record. He was in an incredible position to equalise Pele’s record against Brazil themselves. But the World Cup qualifier was cancelled and Mesis has to wait further. At 34 years of age, he still has 4-5 years of top class football in him and would look to match his nemesis, Ronaldo. He would be looking to win the 2022 World Cup to be recognised as the most complete player in the history of the beautiful game.

The Polish striker has been in the form of his life for the past two years. Contrary to the popular belief that players regress after the age of 30, Lewandowski flourished. Lewy and Ronaldo proved that the peaking of players has shifted from the magical number of 30. With sheer determination and world-class ability, they are racking up numbers they’ve not touched in their hay day.

Lewandowski was in the Ballon d’Or contention for 2020 before the award was scrapped due to the pandemic. This speaks volumes about his goals scoring ability and his importance to his team. Lewandowski plays for a relatively weaker Poland when compared to his heavy slogging goal chasers. Lewy uses this to his advantage as he raises the level of those around him and inspires them to do better. His three goals at the recent Euros took them to the knockouts.

He started firing in the World Cup qualifiers as he looks to secure a ticket to Qatar in 2022 and also catch up with Ronaldo.

The 30 year old versatile forward plays for the United Arab Emirates at the international level. He is capable of playing anywhere across the front line. Mabkhout is a two-footed player and has a wide array of finishes. He plays as a striker for his side but can play perform on either flank with his pace and skill. He also prioritises his nation ahead of his personal glory.

Mabkhout has 76 goals to name and is level with Lionel Messi. He is one goal shy of Pele’s 77 goal record. It could be argued that he scored his goals against lower oppositions but it shouldn’t be forgotten that he played with a lower team. He can easily play for another 7-8 years at the top level and can amass 100 plus goals and catch Ronaldo’s record.

The flamboyant Brazilian is an important figure for club and country. Especially for the Seleceao, he is the driving force as was made evident at the Copa America. He scored two times and assisted three times as they finished runner-ups to Argentina. Though he was in fine form, few felt that he was underwhelming in front of the goal.

Neymar was reduced to tears when he scored his 67th goal at the Copa America. He knew that he was within 10 goals of Pele’s record and was overwhelmed with emotion. Though he failed to add more to his tally at the tournament he was content with what he did. Neymar knows that he needs an international trophy to cement his legacy with the legends of the game. A few goals and a few records broken on the way to a trophy would be the best way for the Brazilian to stake his claim.