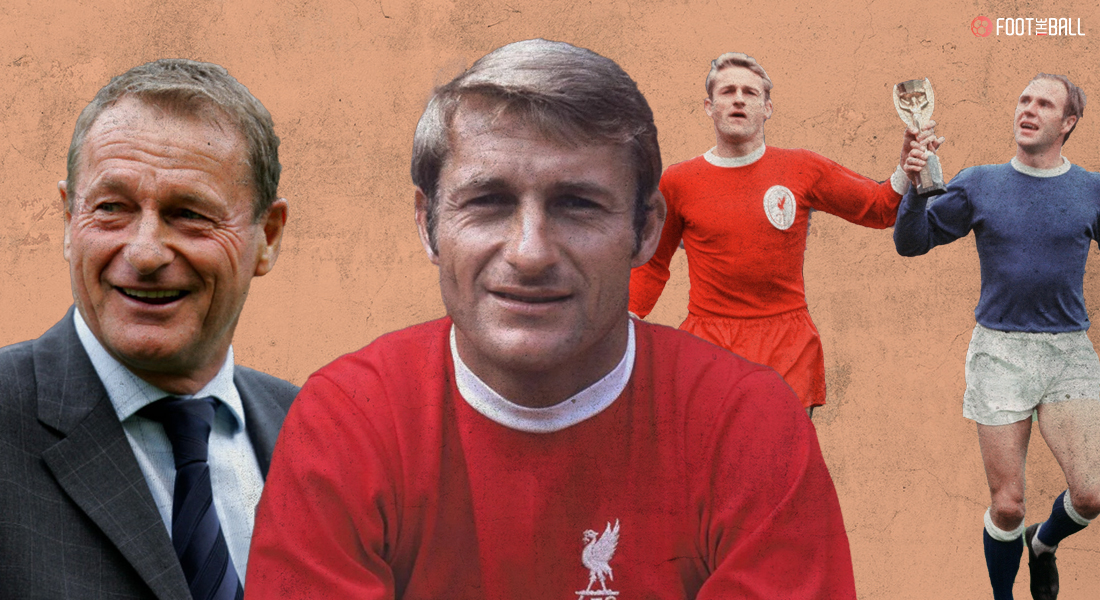 England and Liverpool legend Roger Hunt has passed away at the age of 83. The talismanic striker was a key part of the English side that won the 1966 World Cup against West Germany.

We are mourning the passing of legendary former player Roger Hunt.

The thoughts of everybody at Liverpool Football Club are with Roger’s family and friends at this sad and difficult time.

A career filled with glittering moments Roger Hunt had some memorable times playing for the Reds. We at FootTheBall take a look at the top-5 iconic moments of the striker’s career.

The talismanic striker was considered a crucial piece of England’s prolific squad that conquered the world in 1966. This was the only instance in the Three Lions’ history where they picked up the top spot at the podium. Alf Ramsey’s glittering roster had some jaw-dropping names but it was Hunt who appeared as England’s hero.

The Observer (31 Jul 66): "The clouds split and the sun glared down as Hurst shot that last staggering goal". pic.twitter.com/iv4aZKIB11

The Liverpool striker scored three goals for his country, guiding them to the finals of the tournament. The Three Lions faced Die Mannschaft in a spicy showdown at Wembley as the former emerged victorious by 4-2. The game went into extra time where the home side scored a controversial goal with Hunt being in the middle of it. Geoff Hurst’s shot rattled the crossbar and went it but no one knows if it did cross the line. As soon as Hunt witnessed the shot he started screaming ‘Goal, Goal’ and the referee acknowledged his shouts ruling the decision in England’s favour.

A goal-scoring machine, Liverpool’s Roger Hunt chipped in with some crucial goals for his club. Whenever the Reds were in trouble, Hunt’s right-boot would pull them out of deep waters. The English veteran went on to become Liverpool’s top-goalscorer scoring 285 times in 492 appearances. Only Ian Rush could go beyond Hunt’s numbers for Liverpool.

"Roger Hunt comes second to no-one in his importance in the history of Liverpool FC, that much is clear."

Roger Hunt was purchased by Liverpool in the summer of 1958. Joining from Stockholm Health, Hunt was considered a smart buy by the supporters. Liverpool manager Phil Taylor had captured Hunt’s signature and the striker proved his worth on his club debut. Scoring a goal against Scunthorpe United, Hunt gave a glimpse of what the Liverpool fans would experience for the next few years.

When Bill Shankly arrived at Liverpool he turned the club’s situation upside-down. Deadwood was cleared, a few big names were shown the exit door and much more was yet to follow. But Roger Hunt survived Shankly’s storm as he helped the Reds climb from the Second Division to the First Division.

Along with the newly recruited Ian St John, Hunt formed a formidable strike partnership at Anfield as the duo create havoc with their goal-scoring abilities. Hunt and Ian guided the Reds to a First Division Title in 1963-64 and 1965-66. The two strikers also scored a goal in Liverpool’s 2-1 FA Cup Final win over Leeds United. Unfortunately for Hunt, he couldn’t land a European Title at Anfield as Liverpool failed to replicate their performances in Europe. Hunt reached his goal-scoring peak in 1966 when he scored 29 goals in 37 appearances, guiding the Reds to another title.

HUNT’S SCORING THE FIRST MATCH OF THE DAY GOAL

Although Roger Hunt scored a flurry of goals throughout his career, one of them earned immense amounts of attention. He created history by scoring the first goal shown on Match Of The Day – BBC2’s new weekly football highlights programme. The programme was aired for the first time in August 1964 as the Reds faced the Gunners. The identity of the match that was to be broadcast was kept a secret from viewers until 4 pm, amid fears crowds would not attend matches if they could watch extended highlights of it on the TV.

On a black and white highlights screen, Hunt was the first player to have scored a goal after his strike found the back of the net just after 11 minutes. Gordon Wallace netted a brace as the reigning champions began their title defence in sublime fashion.
Well, I’d call it the Match of the Century, I don’t know about the Match of the Day!’, commentator Wolstenholme joked at full-time.

Roger Hunt’s prolific career had a bizarre ending as his time at the club ended in a unique and disastrous manner. Although he survived Bill Shankly’s first rebuilding process, he couldn’t survive the second one. Roger Hunt was substituted for Bobby Graham in an FA Cup game against the Foxes but one of the most dignified sportspeople’s expressed immense amounts of anger at that decision.

He tore the famous red shirt off and smashed it on the ground after being disgusted by Shankly’s substitution. Leicester City managed to win the game as Liverpool was thrown out in the fifth round of the competition. Although the spectators at Anfield were busy shouting ‘We Want Roger’, the English striker had decided to switch ships to Bolton Wanderers in 1969.