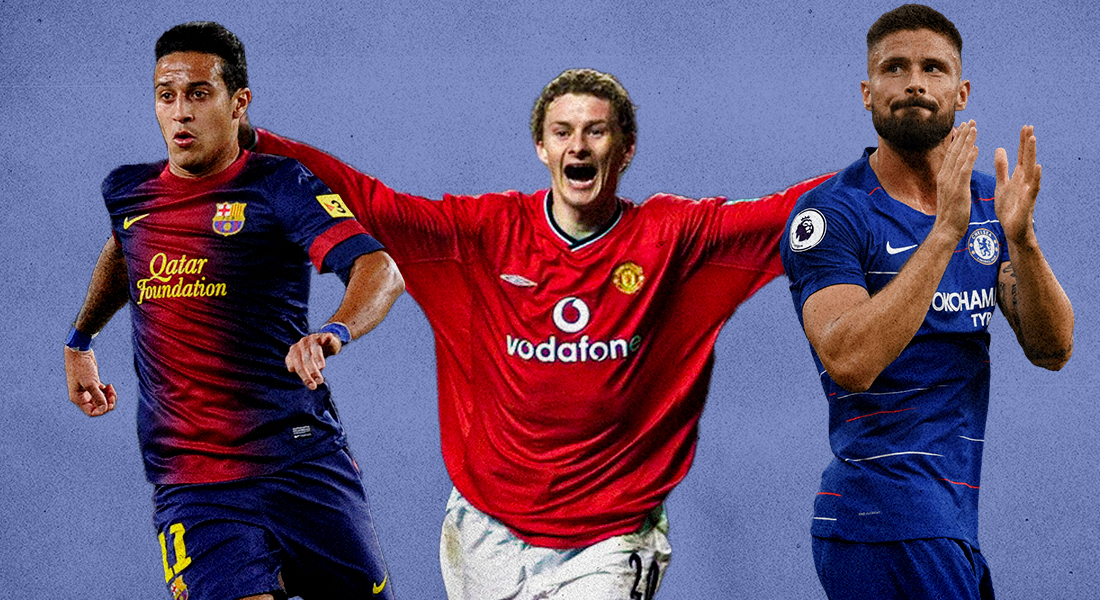 Football is a tactical game. On the pitch 11 players fight with their everything with the detailed instructions given to them by their managers. As the game goes on, the manager decides to shift the tactics and send on reinforcements. These substitutions often decide the game and substitutes go on to become heroes. Be it tactical brilliance from the manager or the player’s instincts impact from the bench.
Foot the ball takes a look at few of the best players to grace the bench and make a real impact on the game.

The Spanish midfield maestro was a bench player for the Catalan giants FC Barcelona. His talent was never in question, but breaking into the first team was impossible. Barca midfield had world-class players like Xavi, Andres Iniesta, Sergio Busquets and Cesc Fabregas. Thiago had to make do with a place on the bench. He came off the bench many times and scored or assisted in crucial games turning the match in Barca’s favor.

However, Thiago left Barca as he realised he was too good for the bench and needed more game-time.

Defoe has been one of the best impact subs in the game. He did it for a host of clubs as well as his country whenever he was called on. He scored many goals off the bench in the Premier League and for England. His scoring record is also incredible. He stands 9th in the all-time scoring charts of the premier league but doesn’t get the credit he deserves.

The dutch sharpshooter was a member of Ajax Amsterdam’s golden generation. His Ajax side swept the European stage in 1995. Kluivert’s strike from the bench against AC Milan in the final won them the cup.

He then moved on to different teams in his distinguished career. AC Milan was the first side to be saved by him from the bench. His saving grace was also applied at Barcelona in the latter stages of his playing times.

The towering Swede was a hero in the 2006 champions league final for Barcelona. His story is unique as he did not score but still would be celebrated as a super sub. He assisted the goals for Samuel Eto’o and Juliano Belletti. This cameo helped the Blaugrana as they gunned downed Arsenal and went on to lift the cup. What’s more amazing was it was his last game for Barcelona.

After getting a move to Inter away from Tottenham, he failed to live up to the expectations. The Danish creative mid-fielder was one of the world’s in his position during his time in England. But in Italy, he just failed to replicate that magic and was relegated to the bench. Antonio Conte now uses him as an impact sub to change deadlocks into wins or see off the games.

This does not go well with the Dane as he wants a move away from the club as he wants to be a starter again.

The Mexican forward made himself a cult figure at United. His crucial strikes off the bench won many games for the red devils. He had a memorable stint with them and won the premier league multiple times.

In a return to the premier league in the latter stages of his career, he replicated the same magic off the bench with West Ham.

He was the first-ever Bulgarian to win the premier league. Though he was a key player at spurs, his move to United fulfilled his title dreams. He knew he wouldn’t be a starter at Old Trafford. So he did most from his game time which was mostly from the bench. His strikes combined with goals from United’s superstars won United many titles during his stay.

The Argentine striker gave his all for the Los Blancos. In his seven-year stay at the Madrid club, he faced many challenges and still kept scoring consistently. It would be safe to say that he was mismanaged. The club made it hard for him to establish himself as they brought in new strikers constantly. Every time it was Higuain who got the ax. He had to score off the bench every time in order to win his place back. In the process, he became a wonderful super-sub for the club.

He finally moved to Napoli where he became a regular starter and a legend.

The French man is a legend of the game. He might not score tons of goals but when he is called for he does the job. For Chelsea, he has been an experienced head guiding Timo Werner and Tammy Abraham and scoring goals. In a star-studded french national team, whenever he gets minutes off the bench or a rare start he scored. He is on course to become the highest scorer for the French national team.

When the word super-sub is mentioned Ole comes to the mind. The current United boss, during his playing days for the club he used to decide games single-handedly from the bench.

Nicknamed ‘Baby Faced Assassin’ his most famous contribution was his goal in the 1999 Champions League final. His strike won United the treble and cemented his place as the best super sub.