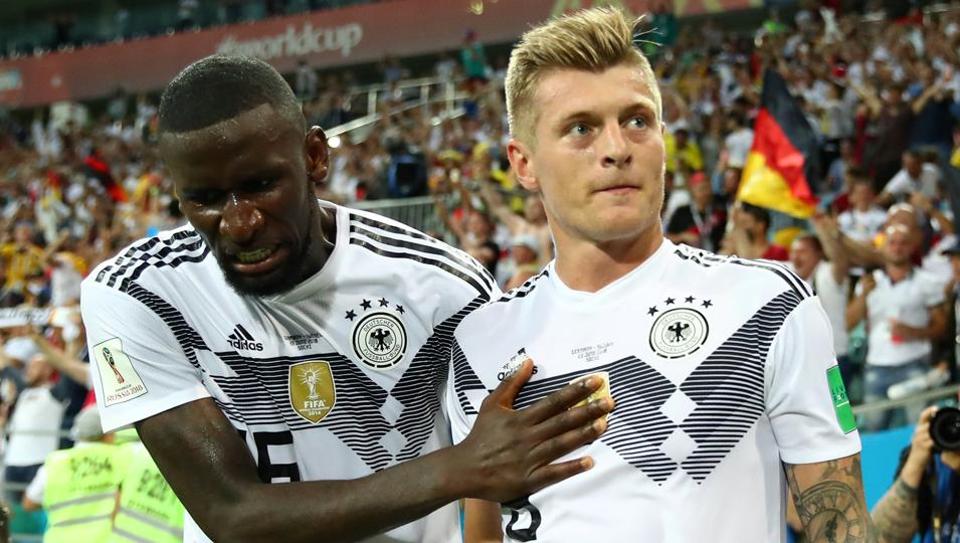 The author, Per Urlaub, is an Associate Dean of the Language Schools and Associate College Professor, Middlebury College. This article was originally published in The Conversation, an independent source of news and views from the academic and research community.

Germany is a soccer powerhouse.

Yet only one member of the national team competing in the 2018 FIFA World Cup, midfielder Toni Kroos, hails from East Germany.

For a period of over 40 years in the 20th century, Germany was divided into two separate countries, East and West. But it’s been almost 30 years since reunification took place, and you would think most regional disparities would have diminished.

So why, today, is German soccer so dominated by players and clubs from the West? And what does this imbalance say about the state of the German reunification?

After Germany’s defeat in World War II, the victorious powers had all sports organizations in the country dismantled.

A few years later, the East German government reintroduced amateur soccer as a workplace physical education program in the large, state-run cooperatives that emerged after the nationalization of the economy.

Meanwhile, in the early 1960s, a professional soccer league, the Bundesliga, was founded in the West.

Unlike their Western counterparts that operated as commercial enterprises, East German clubs were tightly controlled organizations run by the socialist state. The East German government did invest in sports. But they tended to prioritize the country’s Olympic athletes, not its soccer clubs.

Some East German soccer clubs, such as 1. FC Magdeburg, did achieve considerable success in international competitions. The country’s greatest national soccer moment was Jürgen Sparwasser’s game-winning goal against West Germany during the 1974 World Cup held in West Germany. Most East Germans over the age of 50 could tell you exactly where they were when they witnessed this goal; it was their generation’s Kennedy moment.

In order to compete with international clubs from capitalist Western Europe that were able to purchase players from around the world, East German clubs invested in local scouting operations and youth academies, which identified and cultivated homegrown talent. Many of these players matured just in time for the country’s reunification.

A brief period of unity

In the summer of 1990, nine months after the fall of the Berlin Wall, the German national team – made up entirely of West Germans – won the World Cup in Italy. Since the separate soccer associations of the West and the East had not yet merged into a unified governing body, no East German player was on the field during the tournament.

After the game, coach Franz Beckenbauer boastfully predicted that the forthcoming influx of players from east of the Elbe river would make the unified German team unbeatable for years.

The unified German national soccer team certainly did not become unbeatable throughout the 1990s.

However, East German players did join their West German peers on the national soccer team. In fact, only nine out of the 20 field players of the 2002 World Cup squad had West German roots.

The East German players that played on the unified German national team in the two decades after reunification had all been born between the mid-1960s and late-1970s. All of them had been discovered and trained by the East’s youth development programs.

The decline of East German soccer

What happened? Why – with the exception of Kroos – are none of the other players on German’s current national squad from the Eastern part of the country?

The answer lies in economics.

After the fall of the Berlin Wall, the East’s best players immediately left to join the clubs in the West that could pay them higher salaries. Meanwhile, like the economies of other former Soviet countries transitioning from communism to capitalism, the rapid reorganization of East Germany’s economy led to the collapse of entire industries.

East German clubs felt the pain. Not a single club from the East managed to establish a permanent presence in the Bundesliga, Germany’s top professional league. No longer receiving government funding – and unable to attract the steady flow of cash from television deals and corporate sponsorships like their Western counterparts – the clubs from the East were forced to radically downsized their youth academies.

Kroos, of course, is the outlier. But he owes little to East Germany’s soccer clubs.

Instead, his father, Roland Kroos, was a soccer coach. Roland not only identified his son’s athletic potential, but he was also able to develop his boy’s skills. When Kroos was a teenager, his father placed his son into the youth academy of one of Europe’s most successful soccer empires, Bayern Munich. It was in the West where Toni – dubbed by his father the “family project” – matured as a player, before moving on to Real Madrid, where he plays when he’s not playing for the German national team.

Like in many other industries, West German soccer had a head start after the unification. The geographic imbalance in German soccer is emblematic of the unacknowledged economic inequalities between East and West that persist to this day.