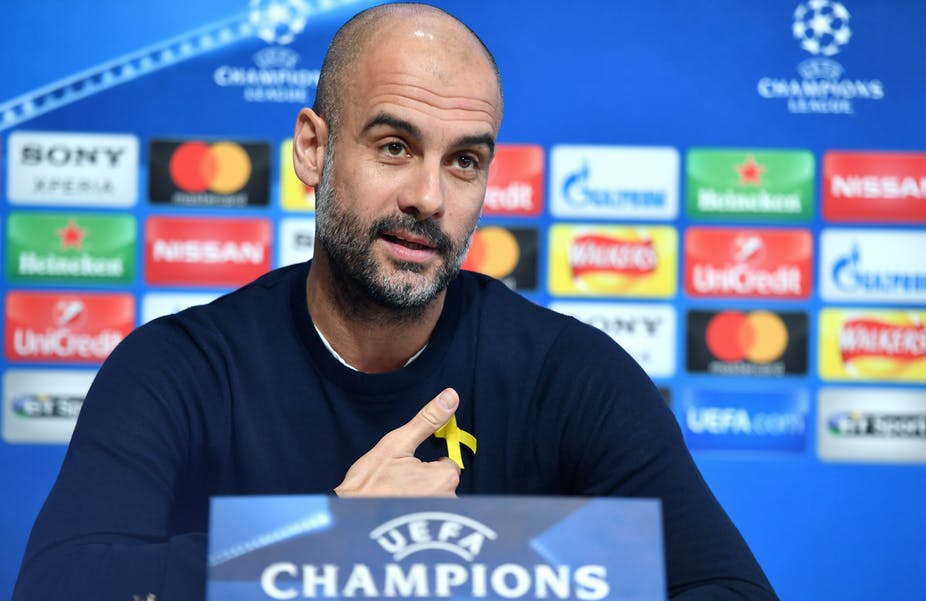 Pep Guardiola And The Long Tradition Of Mixing Football With Politics

The author, Scott Rawlinson, is a PhD Candidate, Political Science, University of East Anglia. This article was originally published in The Conversation, an independent source of news and views from the academic and research community.

As manager of Manchester City, this season Pep Guardiola has won the Premier League and the Carabao Cup. By wearing a yellow ribbon on his chest, he has also been charged and fined £20,000 by the English Football Association (FA) for “wearing a political message”. 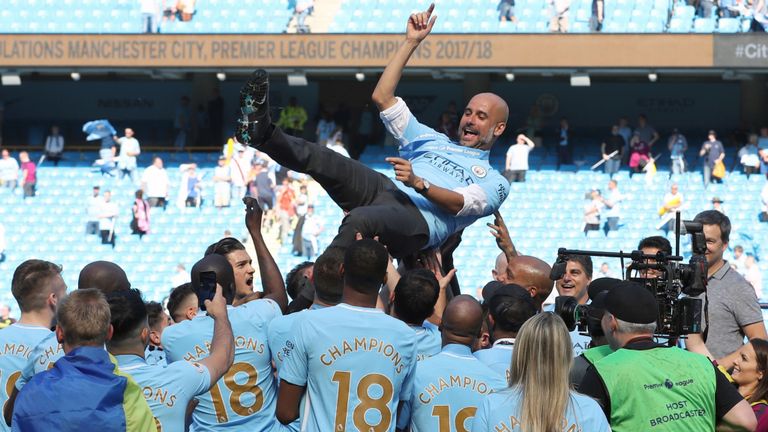 Guardiola insists the ribbon does not represent support for Catalan independence, but instead shows solidarity with pro-independence politicians who have been imprisoned. Either way, the political undertones are clear, and led to the chief of the FA, Martin Glenn, stating: “We don’t want political symbols in football.”

But whether or not we want politics to be a part of football, clubs are, to a great extent, made up of their sense of history and place. This fact is demonstrated on the terraces, on the pitch and beyond, where football, politics, and identity all come together.

Football as an expression of political identification and resistance has plenty of examples. FC Barcelona’s slogan “more than a Club” is well-known, as is its association with Catalan culture and society. The club was also a popular symbol of resistance during the dictatorships of Primo de Rivera and Francisco Franco, and has a famous rivalry with Real Madrid, the club seen by many as the footballing representation of the centralist Spanish state.

Perhaps less famous is the territorial development of Athletic de Bilbao in the Basque Country. Like Catalonia, the Basque Country is an historical “autonomous community” within the Spanish state, with a strong sense of self.

Founded in 1901, Athletic de Bilbao has, since around 1912, only signed local Basque players (albeit with varying degrees of strictness and interpretation). Given the timing of the club’s foundation and growing feelings of Basque nationalism, some have speculated that the origins of this tradition may be tied to the Basque nationalist ideology of Sabino Arana, who founded the Basque Nationalist Party (PNV) in 1895. Many of the club’s bosses were affiliated to the PNV, and Jose Antonio Aguirre, the first president of the Basque Country, once played for Athletic de Bilbao.

The Franco dictatorship – which imposed restrictions on the Basque language – did little to weaken Athletic de Bilbao’s insistence on recruiting local players. And the club’s crest, which includes images of a San Anton church and bridge, located in the province of Bizkaia, is yet another symbolic expression of its geographical and political roots.

In the UK, too, when football clubs play, their histories also play. This could not be truer than in the case of the two Glasgow clubs, Rangers and Celtic. When these sides meet, football, politics and religion are all inside the stadium.

Celtic FC was set up in Glasgow’s poverty stricken East End, where many Irish Catholics had settled in a bid to escape the famine in their home country. The club has its origins in the displacement of people, with the club acting as a point of cohesion.

Meanwhile, many Protestants began to gravitate towards Rangers, and over time the club came to be associated with Scottish Protestantism and Unionism. When the two teams meet on the pitch, the interaction of football and identity is in plain sight, through traditional songs and historic intense rivalry.

A more recent connection between football and politics is clear in the Serbian clubs Partizan Belgrade and Red Star Belgrade, which were described by journalist Nebojsa Markovic as “socialist institutions”.

In 1944, after the National Liberation Army of Yugoslavia (with help from the Soviet Army) took control of Yugoslavia, many of the country’s pre-war clubs ceased to exist. This created space for new clubs to emerge which would reflect the developing political reality.

Red Star came first and took the communist inspired five-pointed red star as its symbol. Partizan was later formed by members of the Yugoslav army. Both clubs survived the break up of Yugoslavia.

With the two clubs located in Belgrade, efforts were later made to turn them into symbols of Serbian national identification. However, they were unable to shake off their Yugoslav heritage and links to the communist state.

As Markovic observed, Partizan’s club crest maintains its image of the six flames which represent the six nations and six republics that were part of communist Yugoslavia. Red Star clearly maintain their red star. A complex political situation forged the evolving identities of the two clubs, including a global context that pitched communism against democracy and the Soviet state against the West. At a more local level, the clubs came to embody a distinctly Serbian identity sitting uneasily beside a wider Yugoslavian one.

Serbia, Scotland and Spain are just three examples of the close relationship between politics and football which exists across the world. Perhaps that’s why Guardiola continues to wear his yellow ribbon. His focus is on his club’s quest for trophies. Because in football, like politics, winning is everything.