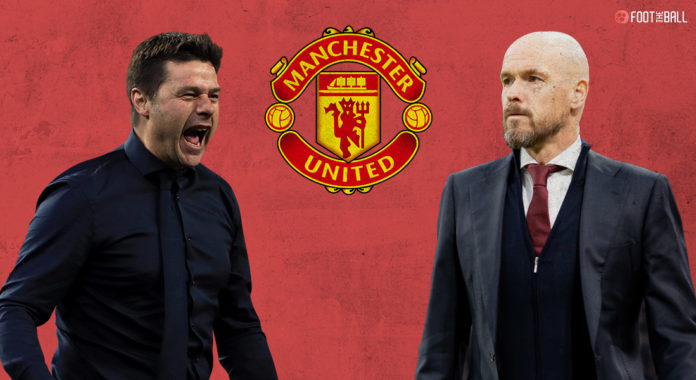 Manchester United have officially confirmed that they are looking for their next manager. Director of football John Murtough assured fans of a “thorough process” in that regard with eyes firmly on silverware. Ralf Rangnick has been doing a decent job and will have his inputs in the search too.

The two most likely candidates right now are PSG manager Mauricio Pochettino and Ajax boss Erik ten Hag. The Parisians and Pochettino have not always seen eye-to-eye with the superstars at the club. Ten Hag, meanwhile, is perceived as being ready for the next big job in his career.

Though there has been no advanced talks with any candidate that we know of so far, United will definitely have a good look at them as a prospective next manager. But who all are in the fray at the moment?

Are you the next United manager?

There have been a lot of names thrown around since the dismissal of Ole Gunnar Solskjaer. One of the favourites in the early days was Antonio Conte, but Spurs got him first. Zinedine Zidane has been out of work since leaving Real Madrid. However, he is still on sabbatical and never looked likely to join in the first place.

Pochettino or Ten Hag? Who would you love to be Manchester United's next permanent manager? pic.twitter.com/fiDblin0Jk

The fascination with Mauiricio Pochettino goes back many years while new entrant Erik ten Hag is a trailblazer with Ajax. FootTheBall looks at the two favourites right now and what they bring.

Getting the best out of a downtrodden team is something Pochettino specializes at. Pochettino joined Southampton in January 2013, and led them to a best-ever eighth-placed finish in 2013-14. As a result, Spurs signed him that year and his five years have gone down in history as some of the best ever. Pochettino worked on a tight budget and regularly overachieved, reaching the UEFA Champions League final in 2019.

Before that, he had already led Spurs to a runners-up finish in the Premier League, their highest position in 54 years. The Red Devils certainly need someone with a strong personality and mental strength to have them believe in themselves. Certainly, not since the Jose Mourinho era has silverware been seen in Old Trafford. Granted, Pochettino has not had extreme success in this regard either but PSG are well on course to lift the Ligue 1 title. Meanwhile, United are in a dogfight for fourth-place with no guarantee of achieving it yet.

Moreover, Pochettino is a players’ manager and some United players are in desperate need of a boost. Marcus Rashford has struggled mightily over the past few months. Fred is blowing hot-and-cold while Harry Maguire’s form has fallen off a cliff. Some of Pochettino’s finest work came with his striker duo of Harry Kane and Heung-Min Son. Cristiano Ronaldo’s future does seem dicey but he should be staying for another season. Who becomes the second option is an open race with Edinson Cavani all but certain to leave.

Pochettino will fill the number 10 with Bruno Fernandes, a direct like-for-like of Christian Eriksen back in his heyday. United have the pieces for 4-3-3, the formation preferred by Pochettino. Therefore, the fans can expect a sense of improved commitment and work rate in order to play in a more solid manner.

The lack of trophies is a glaring omission on Pochettino’s CV. Nevertheless, it should not be a major drawback given Solskjaer was more or less the same. Furthermore, Pochettino will also need to massage a few egos which will keep his hands full. Pochettino will have to juggle minutes between the superstars and the upcoming talent while keeping the harmony intact.

This is problem that has cropped up at PSG as well. How much he gets to spend this summer will be another interesting watch given United spent heavily last year. The defence is an issue and Pochettino will need to decide about Maguire, if he can continue as captain and even in the lineup. The Argentine’s extremely thorough demands of work rate and dedication will be a change that will have to be instilled if he becomes the next manager of United.

The fastest manager to reach 100 league wins with Ajax. Ten Hag has been leading the Dutch giants in pathbreaking fashion since his appointment in 2017. Ajax shocked Europe by reaching the semi-final of the Champions League in 2019. However, ten Hag was bested by Pochettino in the final minute of the second-leg.

Ajax have developed the personality of playing fast-paced games, breakaway counter-attacking and overloading opponents. United are…neither of these things at the moment. Ten Hag can bring out the best in Jadon Sancho as he has done with Hakim Ziyech, David Neres and Antony this season.

Moreover, ten Hag has already shown how to turn around the luck of a striker with Simon Haller breaking records. Anthony Elanga could be next, given his talent and eye for goal already. Ajax are ruthless in their execution and there’s no room for slouching or taking things easy. Ten Hag also has silverware behind him, having won the league and cup double twice. Ajax are aiming to make waves this year in Europe again.

#Ajax and the double pivot, the return to 4-3-3 and the importance of pressure on the ball.

He was fourth in FIFA’s Best Coach rankings in 2019, and is ready to take the next step up. Ten Hag is also extremely visionary in how he sets his team up, with United often looking shorn of ideas. The players can benefit from a fresh set of ideas from a manager who has not managed in this league before.

The Eredivisie is not nearly as competitive as the Premier League. Ajax are the favourites every year and have won six of the past 10 titles. They have the best finances and almost the best players across positions. Even their academy is famed around the world for producing top talents every year. Ten Hag will have a very different environment awaiting for him at United, right from the opponents to the expectations of the fans.

We could see them clash in the Premier League before long.. 👀 pic.twitter.com/za4a5AeUa7

Indeed, the players and their performances will vary a lot more as opposed to what has been happening with Ajax. The transfer market will not be too big a factor because ten Hag is used to developing players rather than buying. Nevertheless, it will be a severe challenge for someone even as pragmatic as him to instantly make an impact.