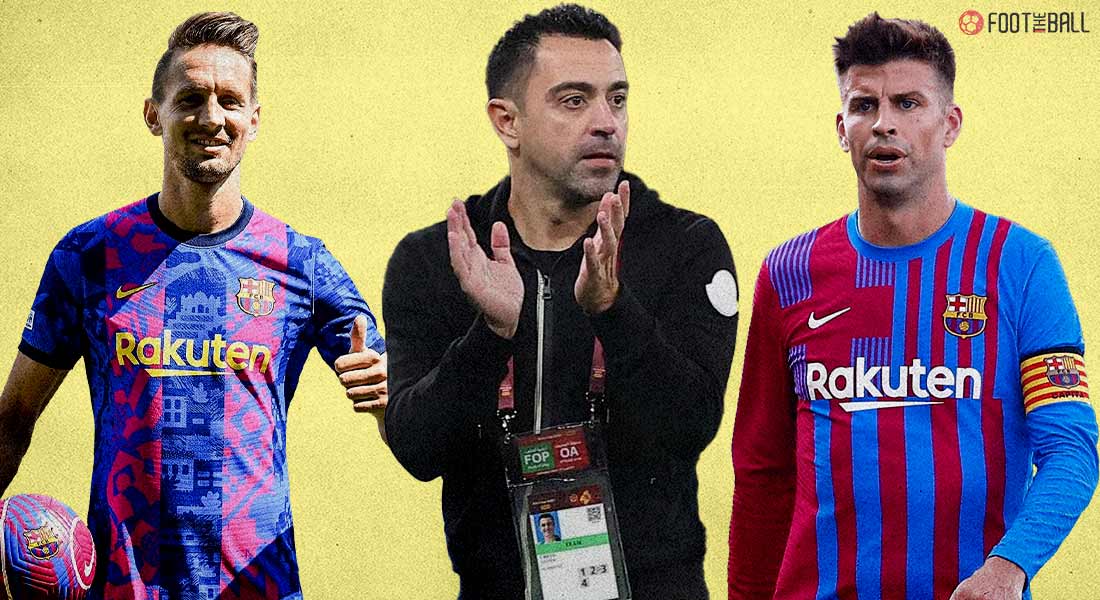 The long and winding road to the sack. That is how the uncomfortable relationship between Ronald Koeman, Joan Laporta, and Barcelona came to an end. The 1-0 loss to Rayo Vallecano last night meant that the Blaugrana remain 9th in La Liga, with some incredibly substandard results already this season.

With the departure of one club icon comes the news of the arrival of another. Former midfielder Xavi, earmarked for the managerial job for a while now, is finally set to take over the hotseat at Camp Nou after positive discussions with Laporta.

Having led Qatari side Al-Sadd to seven trophies in the past two years, expectations will be high from the supporters to turn around or at least steady a quickly listing ship. FootTheBall looks at some major problems Xavi has to deal with immediately and what he can possibly do, bearing in mind the crippling financial restrictions.

WHO IS SCORING THE GOALS

Barcelona have netted five goals in their past six games in all competitions. That is not the craziest part, this is: three of them have come in one match. The big result over Valencia was followed by a nervy 1-0 win over Dynamo Kyiv and Sergio Aguero’s consolation goal in the 90+7th minute against Real Madrid.

Sergio Aguero is up and running at Barcelona 🔴🔵 pic.twitter.com/YK7IDBb2yl

Memphis Depay, their headline acquisition, has been utilised mostly on the left side of a front-three which worked only in their first game of the season. Since then, Depay has struggled to break free and score, usually restricted to supplying crosses or trying to beat his markers with trickery.

The returns of Ansu Fati and Sergio Aguero are great news for Xavi but out of the three of them, only two will start. That is because Aguero cannot play on the sides of a three-man attack, given his inclining age and years of experience being the central man. Luuk de Jong has…largely proved his detractors right who questioned this puzzling transfer ever since it happened.

Xavi will know that getting the side to fire again on a regular basis will be key in determining how far they go in different competitions. Using Depay centrally and Fati on one of the wings seems to be the best way forward, but who can fill the other side?

Koeman had tried Sergino Dest, Philipe Coutinho, and the now departed Antoine Griezmann. The returns of Martin Braithwaite and Ousmane Dembele are eagerly anticipated given they play the position Depay has been forced into, on both sides. If Xavi persists with the 4-3-3, it can be Depay, Fati and for now Coutinho.

68,7% – Since February 2020, Ansu Fati 🇪🇸 has scored 11 goals in his last 16 shots on target (68,7% of conversion rate), the second best percentage for a #LaLiga player after Cádiz's Álex Fernández (75%), at least five goals. Efficacy@FCBarcelona #ansufati pic.twitter.com/oJjgfg9r74

Dest’s poor shooting skills from positions of danger shall see him drop back a bit further as he remains adept in delivering balls into the box due to his pace to get past opponents. The 3-5-2 can see the duo of Aguero/Fati and Depay up top with Dest and Coutinho/Mingueza being the wingbacks.

De Jong will be mostly used as an impact sub, if at all and depending on the game’s situation where they will need bodies inside the box. Al-Sadd are the top scorers in their league, so it will be no surprise if the same can be replicated with the Catalans.

IS THERE A PLACE FOR SERGIO BUSQUETS?

Xavi’s long-time midfield mate and one of the most pivotal playing figures for Barcelona since a long time, Busquets has not been having the best of seasons. He was caught dawdling on the ball by Oscar Trejo last night that set up Falcao’s goal, having looked slow and ineffective in most of his appearances so far.

📸 – Dispossesion from Busquets in midfield leads to a quick counter attack and eventually the opening goal from Falcao. pic.twitter.com/Gfcv7clsgr

Teams have been exploiting his lack of pace well, and though he remains an elite passer of the ball, his starting status at Barcelona can be in doubt soon. For Busquets’ main role is providing cover to the defence and given the Catalans’ lack of…adequate defending, one has to look at the numbers.

Barcelona's veterans combine for their first #UCL goal of the season 👏 pic.twitter.com/71E3QWHEax

1.42 interceptions and blocks, 0.93 clearances (all P90) over the past year are all below the 50 percentile mark for players in the same position across Europe. Furthermore,  with 19.17 pressures applied and 1.54 aerials won (both P90), Busquets in the 64 percentile on average. There is little doubt that he will continue to play an integral role for Barcelona, at least for this season, and his leadership skills are much needed for the younger players.

The problem for Xavi is there is no real like-for-like replacement for Busquets right now. The players who are closest to the veteran in terms of positioning are Rique Puig (22-years-old with four matches) and Nico Gonzalez (17-years-old with seven matches). Nico had one of his brightest games against Rayo, starting beside Busquets in a funky 4-2-3-1.

• Nico González: the only positive from the loss at Vallecas.

• The youngster started alongside Busquets in a double pivot. Most of Barça's good moments went through him. He helped a lot in attack as well.

• It was his first start since the Atleti game.#FCB 🇪🇸

That might be an option for Xavi as well- having two defensive midfielders in front of the backline but Barcelona do not have the resources elsewhere to make this formation work. The more plausible scenario could be interchanging between Busquets and a youngster. Will that instantly improve the side? Unlikely.

But what it will lead to is more experience for the player and given the energy, commitment, drive that they have shown, it can only lead to more good news. Xavi must accept that achieving stability will take some time but slowly phasing out the over dependence on Busquets will have to start now.

The one thing that everyone agrees on needs improvement. Eric Garcia has been poor, if one is being kind. Gerard Pique has made more impact on the attacking side of things than his original job description.

Ronald Araujo has arguably been the best of the lot, with his impeccable timing and reading of attacks but his unfortunate injury has made things a lot harder. Koeman hardly had trust in Clement Lenglet and Samuel Umtiti, with the latter having not featured at all this season. Llenglet has only played five times across all competitions with only two starts.

Mingueza and Dest have been tasked with providing attacking impetus more which has led to the pair being found wanting a bit at the back. Aside from the 17 goals they have conceded in La Liga and Europe, what has been more worrying is how easily opponents are getting chances in good areas. Rayo had three shots-on-target compared to Barcelona’s one which was the saved penalty. Madrid had five to Barcelona’s two and so on. It is a depressing trend.

Again, no immediate fix. Xavi will be keen for the return of Araujo who has established himself as a long-time starter but who partners him? The tossup for the second centre back spot could throw some interesting challenges.

📸 – Eric Garcia loses the ball and then has to take down Inaki Williams. He receives a red card. pic.twitter.com/wOqayY3NPD

With a new manager coming in, both Umtiti and Lenglet will be pushing hard to get back into the lineup. Garcia will be keen to put his struggles behind but might have to settle for a place on the bench. Pique…it is hard to gauge what his role will be exactly. There are good players who can keep clean sheets but a clear step up is needed to turn that defence into great.

Ronald Araújo for FC Barcelona in La Liga this season:

22 years of age. The future of Blaugrana. 🔵🔴 pic.twitter.com/F8uiLFm5ix

Xavi can opt for a back three which will be harder for opponents to break down but the team in front should be well settled. He has little choice with the fullbacks, but Jordi Alba can certainly expect to be more handy on the defensive side of things.