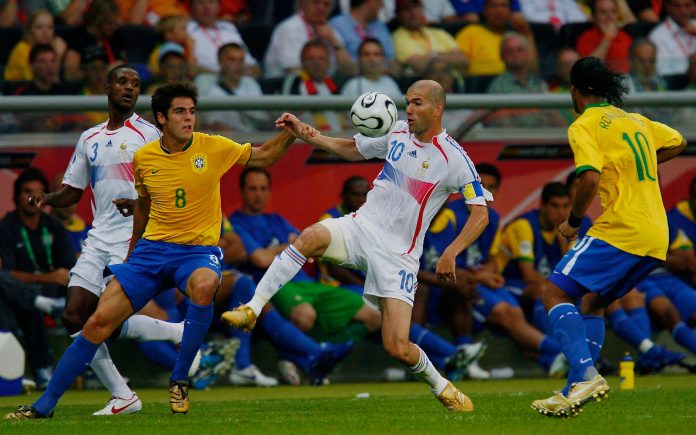 Former AC Milan and Real Madrid playmaker Kaka has admitted that Brazil’s quarterfinal exit at the 2006 World Cup remains one of the most bitter memories of his career.

Brazil entered the tournament as firm title favourites, owing largely to an attacking quartet of Kaka, Ronaldo, Ronaldinho and Adriano that was the envy of the football world.

However, then-Brazil coach Carlos Alberto Parreira, who had guided Brazil to World Cup glory 12 years earlier, was unable to bring the best out of his high-profile squad amid reports that some players were more interested in experiencing Germany’s nightlife than playing football.

After failing to hit top gear during victories over Croatia, Australia, Japan and Ghana, Brazil crashed out of the tournament with a 1-0 loss to France in the last eight.

“I think that the team could have done a little bit more,” Kaka told Brazil’s SporTV. “I think something was missing. Maybe we needed somebody to speak up.

“It was difficult to see that at the time but now, years later, you can analyze it and realize that it was a mess.”

Kaka is one of five Brazilian winners of the FIFA World Player of the Year award, having joined Romario, Ronaldo, Rivaldo and Ronaldinho in 2007.

He said that while he was not the most naturally gifted member of the quintet, he was likely the most disciplined.

“Of the five Brazilians who were the best in the world, I’m probably not the most talented of them,” the 36-year-old said. “But I’m probably the most professional of them all. I knew that talent alone wouldn’t get me far and that I needed to train harder than those guys.”

Kaka, who retired last year after finishing his career at Orlando City, described Brazil’s 2002 World Cup triumph as the highlight of his playing days, despite watching most of the tournament from the bench.

“Even though I played only 23 minutes against Costa Rica, it was fantastic. Winning a World Cup is a major thing. If I had to choose the best moment of my career, that would be it.”