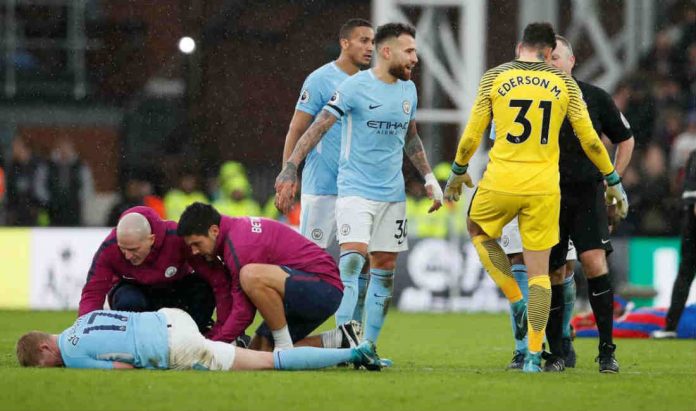 Peter Francis, Director of the Musculoskeletal Science Research Group and Ashley Jones, Senior Lecturer in the School of Clinical and Applied Sciences, Leeds Beckett University are the authors of this article which was originally published in The Conversation, an independent source of news and views from the academic and research community.

For many football fans, the festive football schedule is a highlight of the Christmas break. But for many clubs, the cold conditions and congestion around fixtures can lead to an increase in injuries. In fact, earlier in the year Manchester City boss, Pep Guardiola, said the festive period in English football was “killing” the players.

English football is unique in that it has a high number of fixtures, particularly during the festive period when European teams get a mid-season break. In fact, recent research has confirmed that elite football teams that do not have a winter break (England) lose on average 303 more player days per season to injuries than those teams that do (mainland Europe).

These findings may also contribute to explaining the spike in training injuries seen during the month of December in the latest injury audit of English professional football. And it’s well known that leagues in Northern Europe that play during cold winters are at a higher risk of injury than teams in Southern Europe.

Of course, some fans might claim that modern football players are simply not made of the same tough stuff as their historic counterparts. But recent research published by the Musculoskeletal Health Research Group at Leeds Beckett University appears to suggest that injuries in semi-professional and professional football may actually be on the rise in Britain and Ireland.

These findings are contrary to what might have been expected given that sports science and medicine – which aims to reduce injury risk and improve performance – has never been so prominent at football clubs. Indeed, Alex Ferguson once described sports science as the greatest change in the game during his time as manager.

There are two main risk factors for musculoskeletal injury in athletes: previous injury and sudden increases in training or competition loads. Managers ultimately have the final say on training practices and the number of games a player takes part in. And as a result, management style has an impact on the number of games a player is exposed to and their risk of injury and subsequent re-injury.

The size of a manager’s playing squad will inevitably influence their decision on who takes part and how soon after injury a player returns. And this could mean that smaller playing squads in lower leagues are at heightened risk of injury.

Muscle strains in the thigh region are the most common injuries in professional football. They occur more often in matches than training and usually during high speed running. These trends further suggest that fatigue associated with consecutive matches and not enough rest between them plays more of a role than the physicality of the game.

Further evidence in support of this theory comes from research which demonstrates a reduction in ligament injuries but not muscle injuries in professional football. It seems that exercise programs designed to improve strength and balance have had a positive impact on ligament injuries but that exposure to training and match demands – or, more specifically, sudden changes in the amount of training or matches – is the primary factor associated with muscle injury.

It’s worth pointing out, however, that injury can be caused by both genetic and environmental issues and these interpretations are purely suggestions based on the trends observed.

In the absence of a mid-season or winter break, these findings stress the importance of player management by football clubs and medical teams.

To reduce the risk of injury, clubs should consider reducing or altering the intensive nature of training during periods of fixture congestion – something that has been shown to be effective in professional rugby. This may be supplemented by increased squad rotation.

So for football fans who are unhappy with their teams points haul this festive period, it might be worth checking to see how many of the players were injured. If the answer is quite a few, the reason may be a lack of player availability rather than underperformance – and ultimately, that buck still stops with the manager.