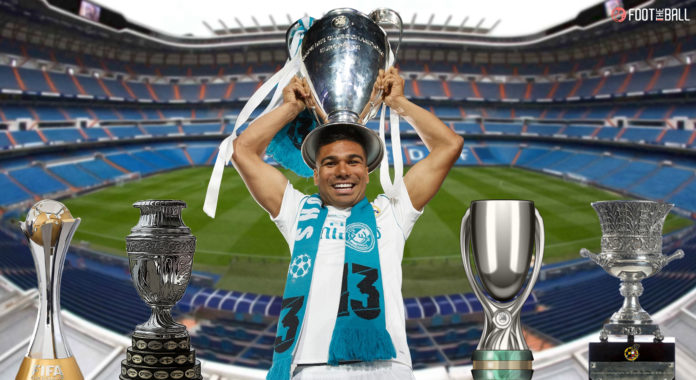 Within 24 hours of losing the Champions League against Real Madrid, Liverpool signed Fabinho as Jurgen Klopp deemed the necessity of having a solid number six. However, Manchester United failed to do so in the last four years. That is until the last 24 hours when they announced the signing of Casemiro from Real Madrid. It was Casemiro’s brilliant performance that had helped Los Blancos defeat Liverpool in that final.

The signing is a significant coup for Manchester United, who have had a horrid start to the season. First, due to the lack of a quality defensive midfielder Harry Maguire and new signing Lisandro Martinez were run ragged by Brighton and then Brentford. In Casemiro, they have a serial winner who has performed at the highest level and been instrumental in Real Madrid’s incredible trophy haul this season.

With the impressive Luka Modric and Toni Kroos, the Brazilian former is a triumvirate that has delivered four Champions League. The last season, Real Madrid won the Champions League as well as the La Liga, with Casemiro being one of the top performers throughout the season, ‘

Erik Ten Hag’s shaky start to the season has fans questioning whether he is the right man for the job. However, now with the acquisition of Casemiro, the quality of midfield has increased significantly.

The midfielder also joins the club when there is vehement opposition among fans against the club owners, Glazers, with billionaire Jim Ratcliffe rumoured to buy the club.

When did Casemiro join Real Madrid?

Carlos Henrique Casimiro, famously known as Casemiro, joined Real Madrid in the middle of the 2012-13 season. The player was initially loaned to the club by Brazilian side Sau Paulo and was sent to Real Madrid reserves. His La Liga debut would come four months later against Real Betis. Madrid also made the loan permanent after shelling out €6 million during this time.

He would then be sold to Porto with a buyback clause that Real Madrid activated in 2015. The club bought him for €7.5 million and offered him a six-year contract till 2021. The rest, as they say, is history. His career has been so brilliant that now Real Madrid prefer to make Galacticos rathery than buying them.

Casemiro has been a serial winner with the Los Blancos, and we at FootTheBall look at the top moments of his Real Madrid career.

Before the start of the 2015-16 season, Rafa Benitez preferred Luka Modric, Toni Kroos, and James Rodriguez in midfield. However, a poor start to the season, including a 4-0 loss in the El Clasico, led to the sacking of Rafa Benetiz. Zinedine Zidane immediately saw the importance of Casemiro and reinstated him in the squad.

He delivered performances after performances and reserved his best for Barcelona. In the second El Clasico of the season, Casemiro would announce himself in style, shutting down Lionel Messi, Luis Suarez and Neymar. Real won the match 2-1 but would lose the title by a single point. However, Madrid’s midfield destroyer had arrived.

The El Clasico win was just the start of a fantastic season for Casemiro. Real Madrid would also reach the final of the Champions League. The Brazilian was the defensive shield for the team. Statistics from UEFA.com show that he recovered the ball 93 times, second-best for a player that season.

Casemiro would play the entire 120 minutes of the final against Atletico Madrid. After that, the match would go to the penalty shootout, where Real would triumph 5-3 to win their 11th Champions League. Winning finals became routine for Casemiro. Begin as you mean to go on, as they say.

Treble winning season and a goal in the Champions League final

If Casemiro’s first season was brilliant, his next season would be even better. By the start of the 2016-17 season, Casemiro was an undisputed starter for Zidane’s team. The previous year, they missed winning the La Liga by one point. However, this year, Madrid would finally get their hands on the trophy.

Real Madrid won 75.6 per cent of its matches when Casemiro played as opposed to 66.7 per cent without him.

He would also be instrumental in Real’s Champions League campaign. He ranked fourth on ball recoveries (85) and third on tackles (25). In the final, Real would defeat Juventus 4-1 to become the first team to defend their title in the Champions League. On top, Casemiro would also score in the final to put his team 2-1 up.

Before moving to Real Madrid, Casemiro had already won three international trophies in the youth format. However, his fourth would be unique as it would come with the senior squad. Despite winning multiple medals with the club, Casemiro found little success with the national team.

However, all that changed in 2019 when he helped Brazil win the Copa America 2019. It was Brazil’s ninth title win and would somewhat lessen the pain of Germany’s 7-1 loss at the 2014 FIFA World Cup.

And the Brazilian would once again play an essential role in making the second-most ball recoveries and winning the third-most tackles in the tournament. In the final against Liverpool, Casemiro would again be at his best, shielding the defence against Liverpool. The Los Balcos would win the match after some brilliance from Gareth Bale and a horrible display from Loris Karius.

While Casemiro has consistently performed in the El Clasico, his best individual performance against the Blaugrana came in March 2020. Real Madrid and Barcelona were neck and neck in the La Liga when Barcelona came to Santiago Bernabeu. And Casemiro put in the performance of his life, making tackles, recovering balls and covering lots of ground like his life depended on it.

He was effectively a one-person show as Real Madrid won the match 2-0 and would win the league by five points.

A league title and a fourth Champions League title

When the 2021-22 season started, no one would have expected Real Madrid to be a significant force. The team had only signed Eduardo Camavinga and Bayern Munich’s David Alaba (on a free transfer). They had also sold Sergio Ramos to PSG and Raphael Varane to Manchester United.

However, the team produced one of the best seasons to stun everyone in the league. They massively overperformed in the La Liga, winning the league 13 points ahead of Barcelona. But their best would be reserved for the Champions League.

Over and over again, Carlo Ancelotti’s men would make brilliant comebacks. And while the limelight was on Karim Benzema and an impressive Vinicius Jr, Casemiro was always the silent assassin. The midfielder ran the show for the team as they defeated Liverpool to win their 14th title improving his and Ancelotti’s brilliant record of reaching finals even further.

In his eight seasons at the club, Casemiro won 14 trophies. Now he will be hoping to do the same at Old Trafford. It won’t be easy, but Casemiro relishes challenges, and has never had it easy in his career.