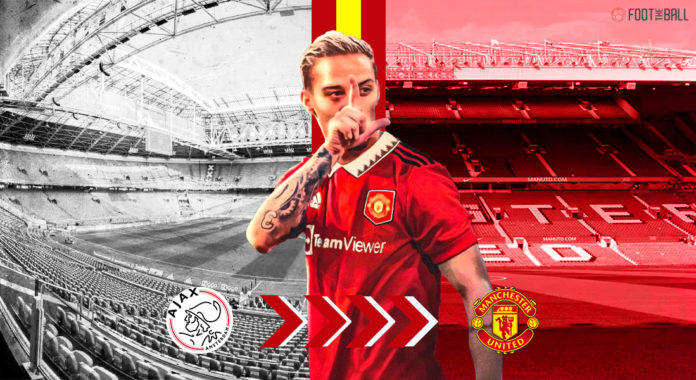 The Sao Paulo region of Brazil has been home to some incredible footballing talents over the years. Kaka, Oscar, and Lucas are just a few of the noteworthy recent names to come from the Southern state of Brazil.

At age 12, he joined the Sao Paulo setup, where he would sign his first senior contract in September 2018. Fast forward to 2022 and Antony has already made headlines after nearly breaking the transfer record for a Manchester United player. Not only that, but he has also broken into the top 3 all-time list of most expensive Brazilian transfers.

Manchester United have been busy in the last couple of weeks of the summer 2022 transfer window after bringing in Casemiro from Real Madrid and now Antony from Ajax. New manager Erik ten hag has also brought in the likes of Tyrell Malacia, Christian Eriksen and Lisandro Martinez from his former club Ajax.

With so much on the line and the burden of transfer fee on his shoulders, FootTheBall analyses how he fits into this Manchester United team and whether he is good enough to be a success at Old Trafford.

Here are the 10 best academy products of Ajax football club

18 goals and 14 assists in his Ajax career suggest that the 22-year-old played a big part in Ajax’s recent season’s form. The newly-capped Brazil international now looks likely to be a part of his nation’s World Cup squad too. This all, of course, came after Antony was part of Brazil’s gold medal-winning team at the Tokyo Olympics.

Antony is best described as a creative playmaker who operates on the right-wing. As a natural left-footer, his preference is to cut inside into the right half-space and whip a ball to the far post, feeding the striker, or pop a shot on goal himself. He is a confident player and there are no doubts about his self-belief, who carries himself in a very positive manner.

In terms of positioning, Antony places himself in wide zones out of possession almost all the time. For an instance, even when the Ajax team shifts across the left side of the pitch, Antony will remain the widest player for Ajax when they are trying to recover possession. This means that Antony is almost always in space, and he will largely do his utmost to evade his marker when he is angled out of the game.

The best left-footed football players right now in the world

Much of the time, Antony enjoys hanging wide on the right so he can gain momentum after picking up the ball by driving inwards. His acceleration from a standing start is explosive; his elite balance and lower body strength allows him to remain on his feet even under heavy pressure – he is a worker with great endeavour, the type of player to clean up his own mess, and no doubt Erik ten Hag and Manchester United emptied their transfer kitty for the Brazilian.

Antony has posted some incredible dribbling numbers in his time at Ajax so far. 8.53 dribbles per 90 is one of the highest figures in the division, and not many can match his success rate at that volume either. Almost always dribbling from a stand-still, it is his explosive acceleration that aids him in bursting past opponents.

In these moments, even under heavy opposition pressure, Antony will look to remain on his feet if he can. In the modern game, this will reduce the likelihood of winning dangerous free-kicks and penalties for his side, but it is indicative of his hunger to keep going. 3.05 progressive runs per 90 represents the advancements that Antony tries to make up the pitch when he gets up the ball.

Antony’s finishing too is well above expected rates. His 0.5 goals per 90 well outreaches his 0.22 xG per 90, and this will level out over time. Part of the reason why his xG numbers are average is due to his decision-making. He is a decisive player, but often frustratingly so, he still quite frequently shoots from speculative zones, and a majority of his efforts come from sub-optimal locations.

He is also in the top 2% for interceptions, so he does all of the above while diligently earning possession back for his team. It is a scary level of involvement and underlines his potential importance now that he has arrived at Old Trafford.

Anyone else excited?…🔥 #Antony pic.twitter.com/7qHTSAgrCG

The Brazilian is an inventive and intelligent player. His signing from Sao Paulo was hailed as a repeat of the David Neres transfer some years earlier, but in practice, Antony is more comparable to Hakim Ziyech.

In Brazil, Antony relied more on ingenuity to create his moments, and there is still an element of that to his game. Now though, after just a matter of months in Europe, he plays with a calculating maturity and sensibility, while retaining that endearing unpredictable streak.

Closer to goal, he is yet again very decisive, which frustrates and encourages. With better decision-making, he could easily be a 15-20 goal-a-season attacker. In a more transition-oriented team, he could be devastating too. Five of his first seven Ajax goals were scored on the break or shortly following a turnover in possession. He is a very good player to have in a reactionary sense.

With the Brazilian still only 22, the Red Devils might have paid an extra 15-20m Euros, but Antony has got time on his side. Even if the Old Trafford outfit decides to sell him in the future, they will get a sizeable return for what they originally invested in him.

Antony’s career continues to go from strength to strength. His hype might be currently overstated thanks to his overperformance in front of goal, but Antony certainly has qualities that many attackers do not at his age. To have the composure to finish off some of these unlikely chances at 22 years old mainly is rather impressive.

For a player of such stature and speed, it would be easy to assume he is obsessed with the by-line. But his relative one-footedness – 41 of his first 45 shots last season in the Eredivisie were taken with his left – means he much prefers to check back inside. As with most Ajax players under the age of 25, the Johan Cruijff Arena wasn’t the last stop on the Antony Express.

Given the lengths United went to prising the Brazilian from Ajax, it’s a deal that could come to define Ten Hag’s tenure at the club. It’s a significant deal that demonstrates the club’s complete commitment to the Ten Hag project.

But even in an era when Premier League clubs often pay a premium for potential, it is a staggering fee. Ajax paid Sao Paulo around £20m for him two years ago and impressive as his development has been since you’d struggle to find anyone willing to argue that he is five times the player now than he was when he first arrived in Europe.