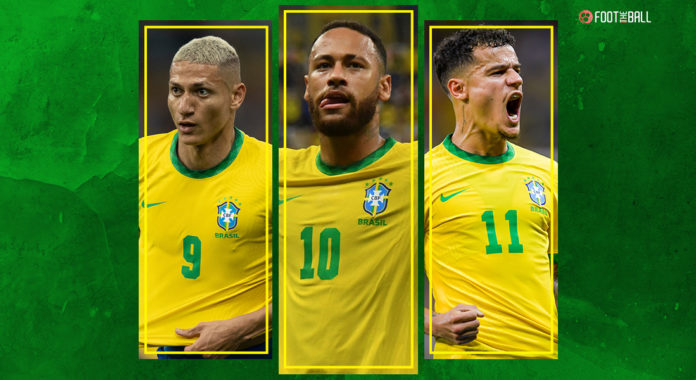 Regarding football, no one can question the impact that the Brazilians have had on the game. From Pele to Carlos Alberto Torres to Garrincha, to Ronaldo and now Neymar and Vinicius Jr, the Brazilians have always got the fans on their feet. The skills they brought were unmatched. It is the reason that the country has five World Cups to their name, the most by any nation.

The nation was also the first to win the World Cup, which accorded them the honour of keeping the World Cup Trophy called the Jules Rimet trophy permanently. However, this skill comes with a hefty price tag in modern football. As they say, you pay the best for getting the best. Over the years, transfer fees have risen exorbitantly over the years, and it is no surprise that Brazilians now command very high fees.

So, FootTheBall brings you the top 10 Brazilian transfers of all time.

The transfer that changed football. When news came out that Paris Saint Germain would shell out €222 million to activate Neymar’s release clause, everyone thought it was just a rumour. However, it turned out PSG were serious, and Barcelona lost one of their best players.

The deal would cause a ripple effect, with transfer fees rising exponentially overnight. Neymar would win a load of trophies at Parc de Princes but failed to win the Champions League. However, it raised the profile of Ligue 1 so much that even Lionel Messi plays at PSG.

Neymar’s transfer was a watershed moment for football and one that has already etched its name in the history pages. While there are rumours that he might leave PSG, the transfer fee would unlikely be anywhere near €222 million which made him one of the top Brazilian transfers of all time.

We mentioned that Neymar’s transfer caused a ripple effect in football. Well, Phillipe Coutinho was the most significant product of that ripple. Barcelona were so confident about retaining Neymar that they became desperate when they lost him. Sure they had a lot of cash, but that was the problem. They had lots of money. Every club knew that and charged them an excessive amount.

The first club was Borussia Dortmund, which sold Ousmane Dembele for £126 million. Then it was the turn of Liverpool, who got €160 million for Coutinho. Unfortunately, these two deals would start a wave of bad financial decisions that put Barcelona into bankruptcy.

And Coutinho failed to justify his price tag, eventually sold to Aston Villa for £20 million after being sent on loan in January.

Before PSG signed him, the Brazilain had already made his place in the top 10 Brazilian transfers list. However, after a race between Barcelona and Real Madrid, Neymar was signed by the Catalans in 2013.

However, all this came to an end after PSG’s massive offer.

Lisandro Martinez is gone but Ajax fans worry not, Rangers’ Calvin Bassey is a perfect replacement

The Neymar angle refuses to go away. The Brazilian’s departure left the start of a reckless spending era, and Arthur Melo was a part of it. Barcelona spent £68 million to sign him from Gremio. With Coutinho already in the squad, the Catalans were sure that their midfield would get better.

However, two seasons of frustration followed when Arthur failed to establish himself in the team. And his exit from Barcelona was equally entertaining.

In 2020, Juventus and Barcelona agreed to a swap transfer of Arthur and Miralem Pjanic. However, both the deals were independent of each other, which left people confused.

Real Madrid bossed the 2009 summer transfer window. Days before they signed Cristiano Ronaldo for a record transfer fee, they had already broken it by signing Kaka. The 2007 Ballon d’Or winner was signed for £60 million from AC Milan.

The Brazilian was part of a star-studded attack that included Karim Benzema, Ronaldo, and Mesut Ozil. In his four seasons, he scored 29 goals and provided 39 assists. However, he performed well below expectations and couldn’t help them win the Champions League.

When Borussia Dortmund eliminated Real Madrid in the 2012-13 Champions League semi-final, Kaka expressed his desire to leave. But instead, the Brazilian returned to AC Milan.

Wanna know about the best metric in football? The click here fast

Well, didn’t we say the Neymar transfer caused a ripple effect? Like Coutinho and Dembele, Alisson Becker was also a part of it. When Barcelona eventually signed Coutinho, it now left Liverpool with a lot of cash. And the Reds, unlike the Spanish giants, spent their money wisely. First, they brought stalwart defender Virgil van Dijk for £75 million. And the Roma goalkeeper Alisson Becker for £56 million. Alisson was a major upgrade over Loris Karius.

With Alisson in goal, Liverpool’s defence improved massively. In his first season, he won the Champions League; the following season, he helped Liverpool win their first Premier League title. He is currently one of the top goalkeepers in the world.

Safe to say, it has been a fantastic investment by Liverpool, which has massively paid off.

In 2017, Paris, Saint Germain, and Barcelona were not the only clubs paying over the top for Brazilians, 8000 kilometres to the east, and the Chinese Super League were doing the same. The clubs in China wanted to raise the league’s stature. That meant signing big players. However, players would only come if they were offered large sums of money.

This was one of the reasons Oscar was signed for a whooping £54 million from Chelsea by Shanghai SIPG. And it is where he has spent the last five years. Apart from causing a fight in a match, which eventually got him banned for five games, nothing much has come of his adventures in China.

At the end of the 2017-18 season, Manchester United had finished second in the Premier League. However, there were 19 points behind champions and neighbours Manchester City. And to improve their team, they upgraded their midfield by signing Fred from Shakhtar Donetsk.

The midfielder was signed for a whooping £53 million and still plays for the Red Devils. While he has not won any major trophy, Fred has shown flashes of brilliance. However, he has failed to show his form for an extended period. His partnership with Scott McTominay has been criticised for being lacklustre.

Everton saved themselves from relegation by the skin of their teeth last season. That was a low point for a team with a considerable amount of several players. The costliest of them was Richarlison, signed from Watford for a fee of £52 million.

The attacker has been one of the few informed players for the Toffees, scoring 53 goals in 152 games. While Everton are perhaps in their worst form, the Brazilian has been a positive light.

Anyone looking for the best young defender? Check our analysis of Ajax’s Jurrien Timber

The latest person to join the top 10 Brazilian transfer club. Raphinha is the newest signing for FC Barcelona in the current transfer window. The 25-year-old has been the star for Leeds United for the past two seasons. Under Marcelo Bielsa, He was one of the best players at Elland Road.

Barcelona paid £52 million for his transfer showing their belief in the player. He will join Robert Lewandowski, Andreas Christensen, Franck Kessie at Camp Nou.