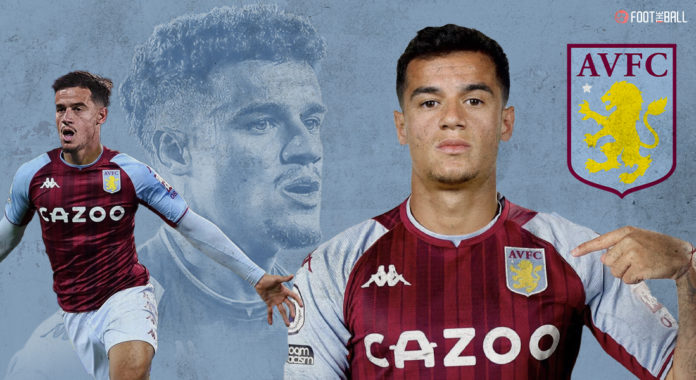 The mystery of Philippe Coutinho’s future has finally been resolved. The Barcelona playmaker is now officially back in England on loan with Aston Villa.

The former Liverpool midfielder has teamed up with Gerrard again at Villa Park, whom he linked up with for two-and-a-half seasons at Anfield between 2013 and 2015. Aston Villa will have an option to buy Philippe Coutinho at the end of his loan deal, the club have announced, with the fee believed to be around £33million.

Aston Villa and FC Barcelona have agreed terms for Philippe Coutinho to spend the rest of this season on loan at Villa Park. 🇧🇷

Philippe Coutinho, once a young Brazilian who came from Inter and lit up Anfield during his spell at the club was desperately looking for a way out of Barcelona. The Catalan giants spent a whopping 142 million euros to acquire the services of the Brazilian maestro in 2018 but he has massively underperformed in a Barcelona shirt.

The loan move to Aston Villa seems to benefit both parties. There is no denying the fact that Coutinho is an immensely talented player who somehow needed to get out of Barcelona in order to salvage his career. Xavi has made it perfectly clear with the team selections that he doesn’t count on the Brazilian & that he is way down the pecking order at Barcelona.

With the Qatar World Cup on the horizon, Coutinho needs to start playing regularly at club level in order to book a spot on the Brazilian national team.

Career so far – From rise to downfalls

Coutinho joined the youth academy at Brazilian outfit Vasco da Gama and spent a decade at the club. He flourished in their youth setup & caught the attention of Italian giants Inter Milan who signed him for 4 million euros at the age of 16. He spent 2 seasons on loan with Vasco da Gama’s first team before joining the Nerazzurri in 2010.

Coutinho at Liverpool: all killer, no filler.pic.twitter.com/kiU2uU93v5

Despite impressing on loan, Coutinho had to spend the 2012-13 season on the bench which ultimately led to Inter sanctioning his sale to Liverpool in 2013.

Liverpool signed Philippe Coutinho for a reported 8 million euros. It is widely believed that it was Rafael Benitez who recommended his former club to go and out and acquire the services of the Brazilian.

The 2015-16 Premier League campaign turned out to be Coutinho’s breakthrough season in English Football. Despite a disappointing end to the season, the Liverpool supporters massively appreciated the Brazilian, labelling him as their “Little Magician.”

After the arrival of Sadio Mane & Mo Salah, Liverpool’s attacking prowess reached another level. The combination of Firmino, Coutinho, Salah & Mane came to be known as the “Fab Four” & it certainly lived up to its name.

In the summer of 2017, Barcelona made an attempt to lure Coutinho out of Anfield. The Brazilian even handed out a transfer request to join the Catalan giants but Liverpool’s valuation was never met. Although he continued to perform at a high level, it was clear that his heart was set on a move to Barcelona.

Coutinho got his wish and joined Barcelona in 2018. With players such as Messi & Suarez at the club, he was signed as an ideal replacement for Neymar on the left-wing. Although there were patches of brilliance during his spell at the club, he never really managed to cement a position for himself in the team.

Barcelona proved to be too big a club for the Brazilian who got submerged in the ocean of expectations at Barcelona. He was loaned out to Bayern Munich as a result of his struggles but the Bavarian outfit refused to sign the Brazilian on a permanent deal. The Brazilian will now spend the remainder of the season at Villa Park.

How Villa and Coutinho can help each other

So what sort of player is arriving at Villa Park? To a certain extent, the Brazilian will return to the Premier League with his tail between his legs – nobody would have predicted Aston Villa would be the next team he played for in England when he put pen to paper on a five-and-a-half-year deal with Barcelona in 2018.

“63 caps for Brazil, a serial winner, played for Barcelona, was incredible at Liverpool.

“I can understand why a lot of supporters up and down the country are speaking about him.” 🔥

Coutinho can easily fit into Gerrard’s system owing to his versatility. He can play as a classic Number 10, a box to box number 8 or even as a winger on either flank. His close ball control & dribbling ability coupled with his set-piece prowess can wreak havoc in the opposition defence.

Coutinho will also be helped by the fact that he’ll have a head coach like Gerrard who has shared the dressing room and can possibly act as the catalyst for the revival of his career.

The Brazilian now joins the likes of Ollie Watkins, Danny Ings, Emi Buendia, Leon Bailey and Bertrand Traore in the squad’s attacking ranks, three of whom are now unlikely to start.

The question now is whether the Brazil international can come close to recapturing the form that earned him a move to Barcelona, as he bids to make a return to the national team ahead of the World Cup at the end of the year.

"I don't think you get a nickname as a 𝗠𝗮𝗴𝗶𝗰𝗶𝗮𝗻 if you're not a special footballer." ✨

Steven Gerrard on Philippe Coutinho, who has agreed terms to spend the rest of this season on loan at Villa Park, with an option to buy. 🤝 pic.twitter.com/BFbxhGLxkR

It is here where Gerrard’s man-management skills will be needed. Coutinho will also need time to readjust to the Premier League’s pace and physicality but knows he arrives with a huge sense of expectation on his shoulders.

A way out was required and, for the time being, at least, has emerged via an unlikely source. Villa, who sold their star man in the summer just as Liverpool did this time in 2018, have lacked a spark at times this season. It’s ironic that Jack Grealish has regularly cited the man that has come in to replace that maverick as an icon of his. A player he sought to emulate with the way in which he carried the ball and evaded opponents.

The option to buy the Brazilian will perhaps come as a surprise to some, but Gerrard will be hoping that Coutinho can succeed at Villa having been a big fan of him when they were teammates.

Writing in his 2015 autobiography, Gerrard said: “Coutinho had been brilliant since day one.

“He came to us as a twenty-year-old from Inter Milan in January 2013 and he had grown month by month.

“It was sometimes mind-blowing to see what he could do with a ball at his feet in training. Philippe had the quickest feet in the squad and he was the one player I’d be a little bit wary of getting too close to in tight situations during training.

“Coutinho could make a fool of you. He was that good – and I believed he was on his way to becoming Liverpool’s main man and a top player in world football. Watch this space.

“Coutinho suited being a gifted number 10. We called them magical players but I think Brendan [Rodgers] was the first to refer to him as ‘the magician’ – and the name just stuck.

“There was no better word to describe Coutinho on form. He was also a fantastic kid. I loved him to bits, just the way he went about his life and his football.

“Philippe was very quiet and very happy on Merseyside. And out on the pitch, where it mattered most, he was a dream to play alongside.

“Coutinho never hid. He always wanted the ball. Of course he’d had some tough games where he had faded but he was still very young. I knew he had a wonderful talent which would shine in the hard games we still faced.”

If all goes well, it could be the perfect replacement for Jack Grealish. Emi Buendia, the £40m summer signing from Norwich, has struggled to impose himself at Villa. If not, Coutinho’s move could be banded in the same bracket as James Rodriguez to Everton.

His first appearance for Villa could well be against Manchester United in the Premier League on January 15 – Gerrard’s side host United at Villa Park in the late game that Saturday.