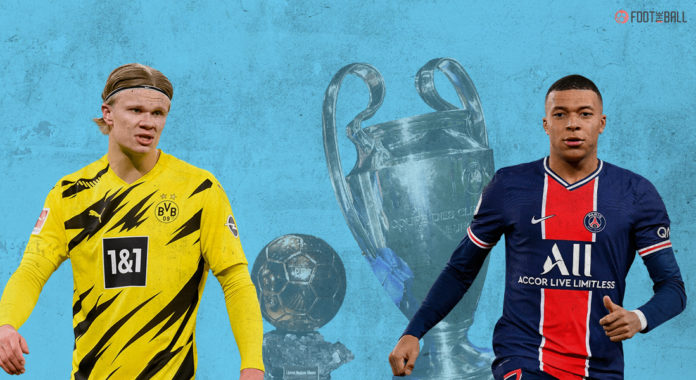 It has been a less than ideal start to 2022 for Real Madrid on-field. A narrow 1-0 loss to Getafe away from home kept them on 46 points, five ahead of Sevilla in second-place who have a game in hand.

Not a great start to 2022 for Carlo Ancelotti's side. pic.twitter.com/uj5FjJzgv6

No doubt they will bounce back quickly and put this result behind them but it is their off-field ambitions that is causing quite a stir.

It is no secret that Florentino Perez is coveting Kylian Mbappe as his newest Galactico, with the French sensation’s contract at PSG ending in the summer. However, reports have also emerged in the recent days that Madrid are also going to have a go at signing Erling Haaland from Borussia Dortmund, given that his release clause becomes active soon.

🚨🌕| Real Madrid's top priority is still to sign Kylian Mbappé as a free agent, and they ALSO want to sign Erling Haaland and will work on it. They are in the race, but as of now there is NO agreement with any club. Still an open race. @FabrizioRomano on @Twitch #rmalive pic.twitter.com/LsywBYuPA0

That would certainly send the loudest signal yet of them wanting to dominate European football for years to come.

TWO IS BETTER THAN ONE

Mbappe to Madrid has been talked about for years now, with rumours intensifying given PSG’s inability to win the Champions League. The 23-year-old just surpassed 200 senior career goals and looks well set on his way to smashing all sorts of records during his playing career.

Madrid see him as the natural successor to Karim Benzema, but can the two co-exist in the short term? Harking back to the days of the BBC, there were three strong personalities sharing the dressing room and were very successful in delivering silverware for the club. In the present time, there is no doubt regarding the place of  Vinicius Junior in the side as he has been on fire throughout the season so far, his linkup play with Benzema the stuff of dreams. Those two will be pretty much certain starters and adding Mbappe will just take it up a notch.

Real Madrid president Florentino Perez: “The state owned clubs don’t sell their players. It’s a madness. Now we offer €200 million for a single player and they don't sell him. When players finish their contract it's better”, he said to @Ramon_AlvarezMM. ⚪️🇫🇷 #Real #Mbappé pic.twitter.com/fKutOMVxXI

Haaland’s pursuit is more of a recent thing, with Perez famous for jumping on the bandwagon of convincing the top players to join. He has done it before with the great team of the early-2000s, and this year could be the start of something similar.

Haaland’s lowly release clause (by Madrid’s standards) has made him an attractive target, with Mino Raiola also being a well-known agent at the club. Acquiring both of the players will be a literal gamechanger for Los Blancos, as Haaland is no slouch himself.

The bloke is a CYBORG. 🤖 pic.twitter.com/ip7rK1AwDa

He has scored almost a goal per match since arriving in the Bundesliga, and is destined to leave Dortmund sooner than later. However, the race for Haaland is more open than the one for Mbappe under the current situation.

There is no doubt that the situation with Haaland is being tracked by a lot of clubs across Europe. Chelsea, Manchester United, Barcelona, Manchester City, are just some of the bigwigs that have been linked with the Norwegian over the past year. The fact that clubs have to arm wrestle with Raiola and his huge commission will no doubt put a few of them off.

🚨 Manchester United and Chelsea have received a boost in their pursuit of Erling Haaland after Real Madrid have 'accepted he is going to the Premier League'.

Barcelona have emerged as a surprise leader in the race, with president Joan Laporta making his intentions clear in the transfer market with the words “Barca are back.” Of course the club would have to clear up finances by quite a bit and there is no illusion that some of the current Blaugrana players have to leave soon if they are to achieve this mammoth goal.

Barcelona president Joan Laporta again on Haaland and big signings for next months: “Everybody in the world should get ready, as we are back as big players in the market. Barça are back”. 🔴 #FCB

Another line of argument that has emerged is that Haaland would not like to share the spotlight with Mbappe at Madrid. This could very well be the case behind the scenes, with similar stuff said to have happened at PSG last summer too.

🚨 Erling Haaland will sign for Barcelona this summer if Joan Laporta can find the funds.

He would prefer Barça so he doesn’t coincide with Kylian Mbappé at Real Madrid.

With Lionel Messi’s arrival, Mbappe was said to be slighted at being upstaged in terms of recognition and fanfare. Perez and co. tried signing the player back than itself, leading to PSG president Nasser Al-Khelaifi publicly lashing out at the Spanish giants.

Mbappe has always had dreams of playing at Madrid, but to his credit, refused to be drawn into discussions regarding his future. A further chapter has been added with his current club and potential future club facing off against each other in the Champions League round-of-16. It will be interesting the conversations that emerge following the tie, but this destination seems to be clear for now.

Coming to the most interesting aspect- finances. Barcelona are really struggling to offload players, and their financial strength to sign Haaland is definitely weak. Meanwhile, their arch-rivals have no such worries since they only added David Alaba last year.

🚨 Joan Laporta is working tirelessly to bring Erling Haaland to Barcelona. The club know they can't allow Real Madrid to have a forward line of Mbappé, Vinícius and Haaland.

Furthermore, there will be at least two notable departures with Isco and Gareth Bale set to leave at the expiry of their contracts. Eden Hazard could follow suit, and the finances being freed up will certainly help in convincing Haaland. Just today, it emerged that Madrid have supposedly made a 50m bid to sign Mbappe in January, but PSG will no doubt reject it unequivocally.

Kylian Mbappé announces to @cnn: “No, I'm not joining Real Madrid in January. In January it's not happening”. 🔴🇫🇷 #PSG

“I'm in Paris Saint-Germain, I'm really happy and I will 100% finish the season as PSG player. I'll give everything to win with Paris all titles this year”. pic.twitter.com/3tFUHUr8a1

Perez is going all-out as the footballing world knows and few stand a chance when he is in this sort of mood.