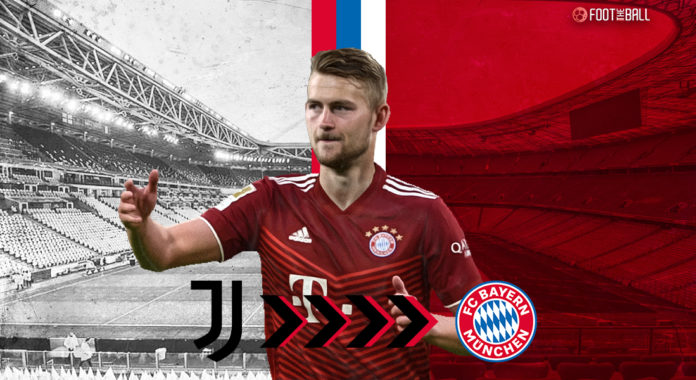 Bayern Munich have been one of the busiest sides in the 2022 summer transfer window. Despite winning the past 10 Bundesliga titles, the German giants are never happy to settle.

Bayern have already signed Sadio Mane, Ryan Gravenberch and Noussair Mazraoui, alongside tying down Serge Gnabry to a new deal. However, the most-talked-about and publicized deal has been the departure of Robert Lewandowski.

The record goal-scorer has joined Barcelona, and it remains to be seen how Bayern replace him. While that is something time will tell, another deal has been completed already. The Germans have signed Dutch centre-back Matthijs de Ligt from Juventus.

Before his spell in Turin, he was a rising star at Ajax. Niklas Sule’s exit had left a space in central defence, with De Ligt slotting in seamlessly. Julian Nagelsmann would relish working with an evolving talent, and De Ligt is an upgrade over Sule.

However, the main competition will come in the Champions League, where Bayern have faltered in recent times. FootTheBall grades this transfer over a number of parameters to find out how it may turn out.

A ball-playing central defender who is just 22-years-old. The kind of players Bayern love to have and develop over many years. Matthijs de Ligt could prove to be the most astute acquisition of the summer, despite the price tag.

Nagelsmann prefers players who can advance the ball quickly, spraying long passes out from the back. Moreover, De Ligt will be flanked by extremely adept centre-backs in Dayot Upamecano and Lucas Hernandez.

Bayern love to play a high line, as the Bundesliga is seemingly too easy for them. However, De Ligt will have to call upon all his experience and judgment during the European campaigns.

Though his three-year stay with Juventus was a bit middling, it mainly had to do with the Old Lady’s fall from grace. De Ligt has shown time and again that he can be a major asset for club and country.

Additionally, he is a also a major threat from set-pieces, and can make decisive contributions at both ends of the field.

De Ligt is one of the most physical defenders in the game currently. That is reflected in his stats over the 2021-22 season. According to Soccerment, De Ligt won 61.7% of his duels and completed 66.7% of his dribbles.

Moreover, he was also unstoppable in the air, winning 63.1% of all aerial duels. As mentioned above, the passing is his forte, with a pass success ratio of 88.9%. De Ligt found the net three times with Juventus and made one assist.

Most tackles + interceptions by Juventus CBs in the 21/22 Serie A season:

10/20 of his shots were on-target, which is pretty impressive for a defender. However, De Ligt has to work on his temperament a bit more. He was shown four yellow cards and one red card in 2021-22, with Juventus struggling in those matches.

There is no doubt that the team’s problems seeped down to him, but Bayern command absolute dominance. Therefore, it is unlikely that De Ligt will come across any major road blocks in Germany.

Moreover, the number interceptions (1.36 per 90) and tackles (1.23 per 90) can certainly see improvement. De Ligt is very young, meaning his game still has major developments to go through. Bayern are gunning for those to peak at the right time.

Given that he is 22-years-old and a regular for club and country, €80m sounds about fair. However, make no mistake, Bayern are betting big. De Ligt is now the third-most expensive defender in the game. Incidentally, he surpassed his new teammate Lucas Hernandez to reach that spot.

Bayern Munich have been relentless linked with Cristiano Ronaldo, but seem to be disinterested. Where else could the superstar Portuguese go?

Bayern rarely invest this kind of money, with prudence being the watch word. However, the fact that they are willing to show this kind of commitment is a sign of their trust in De Ligt. Needless to say, De Ligt has all the characteristics to become a world-class defender.

Moreover, they also have the finances to get these kind of deals done. De Ligt knows that there will be a pressure on him, given the price tag. However, that should not take anything away from De Ligt’s natural game.

He is one of the most formidable defenders on his day, and has all the qualities needed to shine in Germany too. The transfer fee will be judged harshly by some quarters, patience will be key. Of course, there will be a settling in period, before De Ligt takes off.

De Ligt will be an immediate starter in the three-man defence alongside Upamecano and Hernandez. Bayern do not have too much experience coming off the bench, so keeping De Ligt fit will be another major concern.

Bayern have an absolute stranglehold on the Bundesliga, but European glory will be key. De Ligt will have Mazraoui on the right, his former Ajax teammate.

Therefore, there is a lot of optimism surrounding De Ligt who did not have the best of times at Juventus. With the 2022 FIFA World Cup in Qatar approaching, he will be hoping to recapture his best form.