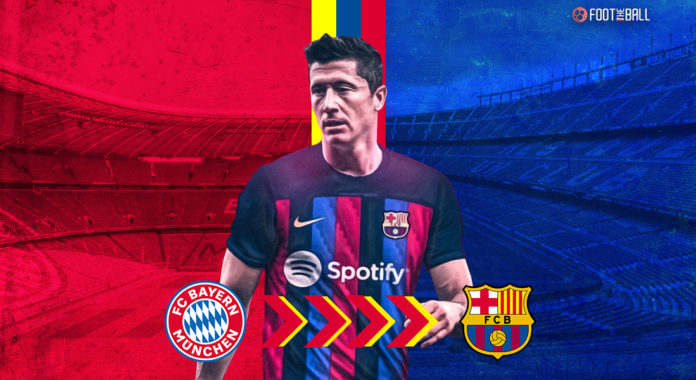 Which is the richest club in the world right now? It is not Real Madrid or Bayern Munich or Manchester United. It is Barcelona. Indeed, the Blaugrana are on a buying spree of late. Before the transfer window even began, they had signed free agents Franck Kessie and Andreas Christensen.

The Polish striker had long been public about his desire to join Barcelona. Though Bayern Munich relented in the beginning, the right kind of offer finally persuaded them. There are many questions over Lewandowski’s fit into a youthful side.

Will Memphis Depay be sold? Can Lewandowski continue performing at his peak powers? How will the attacking options work around him? FootTheBall analyzes the transfer of Lewandowski to Barcelona on a variety of parameters.

A player that needs no introduction in front of goal. Robert Lewandowski is one of the greatest goal scorers of all-time. In fact, he has scored more goals than the likes of Cristiano Ronaldo and Lionel Messi over the past six seasons.

🤯 Robert Lewandowski has scored 110 goals in 94 league matches over the last three seasons, averaging a goal every 74 minutes in that time pic.twitter.com/bzgDhEtwdu

Lewandowski is an excellent finisher who can find the net from all angles. He plays centrally, and can double up as a target man with excellent holdup play. Moreover, Lewandowski is no slouch in setting up chances for his teammates either.

How Barcelona had strangled the transfer market, before eventually winning it all for now

Given that Barcelona will have extremely fast players around Lewandowski, there is a lot of optimism. Lewandowski will not be expected to do a lot of defensive work, but that is not needed also.

The revolution under Joan Laporta and Xavi is going on strong, as Barcelona qualified for the UEFA Champions League. However, they need to take the next stop in order to catch up to Real Madrid.

That will take a lot of world-class players, and Lewandowski is a certified superstar. He is also adept at headed strikers, and can win aerial duels from set-pieces too. There are a lot of creative ways in which Xavi can now set his team up.

They don’t call him Robert “Goal-ski” for nothing. 50 goals across all competitions in 2021-22. That was preceded by breaking Gerd Muller’s 40-goal Bundesliga record in 2020-21. Put simply, when a team has Robert Lewandowski, goals are a guarantee every season.

Who is Alberto Moleiro, dubbed the ‘next Pedri’ and monitored by Barcelona?

Barcelona scored 68 goals in La Liga in 2021-22, the second-highest. The gap between them and Real Madrid was 12 goals. That is the kind of deficit Lewandowski can cover up in his sleep.

According to FBref, he takes 4.34 shots per 90, amongst the best in Europe at 99th percentile. Moreover, Lewandowksi was involved in a healthy 3.13 shot-creating actions per 90.

Though he is a keen runner, the 33-year-old did complete 58.5% of his dribbles, while winning 47.3% of aerial battles. Barcelona do have to make changes to the way they run the offense, but getting Lewandowski is them placing major faith in winning silverware now.

This is the hardest part to justify about the whole deal. €45m+ €5m add-ons is extremely hard to digest when you consider the past and future of Barcelona. First, the past. Barcelona have only just recovering from their disastrous years under former president Josep Bartomeu.

The Blaugrana ate through cash like candy, which left Lapora one hell of a rebuilding job. Barcelona were struggling to cover their yearly wages, which led to club legend Lionel Messi leaving in 2021.

You only get to a semi/final of a CL with that kind of quality.

Even if Lewa can give you two seasons of that, there IS no rebuild. It happened already. Barca are back and more elite signings will follow.

They won’t give him a lucrative 5+ years deal that ruins the finances.

Senior players were all asked to take a paycut, while most signings were free agents in January 2022. Even now, Barcelona have had to mortgage a substantial part of their future through the “economic levers.”

The Ballon d’Or race is between Karim Benzema and Robert Lewandowski, so who wins in October?

Though the money is coming in, the future of the club is extremely uncertain in the short and long-term future. Speaking of future, Robert Lewandowski is an automatic starter. But a four-year contract, running till he is 37/38? That seems a bit extreme.

Laporta is clearly focusing on countering Madrid and Karim Benzema through Lewandowski’s signing. However, all of it could backfire if the team morale is takes a massive hit.

The fit is another huge question mark hanging over Xavi. Who starts and who rests? Barcelona signed Ferran Torres and Pierre-Emerick Aubameyang in January 2022. Ansu Fati is fully fit.

The last time Lewandowski and Aubameyang played together;

They will be reuniting in Spain 🇪🇸 pic.twitter.com/diSbCN87LH

Memphis Depay is a central striker for the Netherlands national team. Granted, Raphinha and Ousmane Dembele will fight it out for the right-sided attacker berth. But that still leaves a lot of unanswered questions.

Will Depay be happy taking a backseat in a FIFA World Cup year? Where will Torres play? Will Aubameyang be shifted to the left flank again? Fati is the number 10 and the future of the club, does he settle for regular appearances off the bench?

Lewandowski’s arrival has released the cat amongst the pigeons. No doubt he will provide a ton of goals, but at what cost? Laporta and Xavi need to play this exactly right in order to keep everyone happy and focused.

Barcelona can hardly afford to muddle this up, given the sizeable investments they have made already.