Catalans somehow get their man 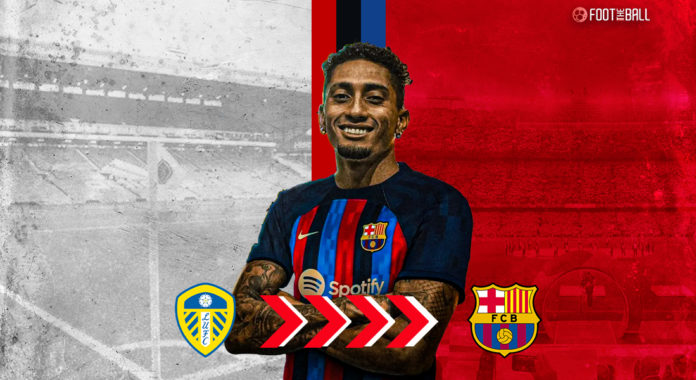 Leeds United have been one of the most intriguing sides to have been promoted to the Premier League in recent seasons, and have certainly garnered a lot more attention from the media than one would expect of a promoted side. This is partly due to Leeds’ status as one of English football’s great old clubs, and their long-awaited rise back to the top table after decades spent in the Championship and even lower. The majority of the attention, however, has been brought by the sheer brilliance of Raphinha on the pitch.

Leeds have had a decent few seasons in the Premier League so far. Their recruitment in the transfer windows has been a big reason for this, with Leeds bringing in some proven quality as well as young players who can be moulded and developed by Bielsa, and the biggest impact of all those arrivals has undoubtedly been made by Raphinha.

The Brazilian winger, who arrived from French club Rennes for £17 million, took a little while to settle at Elland Road, but he has become one of the most dangerous attackers in the Premier League over the last few years. He had also become an integral part of Bielsa’s system, with the manager’s faith best being shown by the fact that Raphinha has rarely been rested – the biggest sign that Bielsa trusts you, since he rarely changes his first-choice XI too much.

With all that in mind, Raphinha was obviously expected to move to one of the elite European football clubs, with Arsenal, Chelsea and Barcelona all in the front-seat for his signature at some point. At the end after a much-prolonged transfer saga, the Catalans have won the race for his signature and will pay around 70m euros including add-ons. FootTheBall take a look at how will he fit into Xavi’s system and whether a move to La Liga would suit the Brazilian.

Raphinha is a 24-year-old winger, standing at around 5’9″ and weighing 58 kgs. Thus, he is a relatively light player, with a low centre of gravity which allows him to dribble effectively, as well as surge away from players at pace. The Brazilian is left-footed, and has primarily been played on the right, although he has been used on the left on occasion as well. As a result, he does look to cut inside, but Bielsa places huge importance on width in the final third, which is why Raphinha will often be found hugging the touchline, despite playing on the right.

Raphinha possesses a low centre of gravity, due to his size and it allows him to dribble at speed effectively, beating opponents with ease. The winger is blessed with pace and flair, add both together and you have a defensive headache coming up against him. The agility in which he manoeuvres the ball from left to right, is very entertaining as well as unpredictable for defenders to defend. He receives the ball in areas where he can then look to run down the line or come inside, depending on where the space is.

He ranks amongst the league’s most successful dribblers with 2.10 Successful Dribbles per90, ranking him as a better dribbler than the likes of Adama Traore and Aubameyang.

Raphinha ranks amongst the best creators in the league in terms of shot-creating actions. Currently, the winger registers 4.35 shot-creating actions per90. In terms of goal-creating actions, he registers 0.45 per90, which is higher than the average amongst forwards in the league so far. On top of that, he also ranks as one of the elites in terms of key passes and expected assists per90 as well. So far, being Leeds’s source of creativity, he has registered 0.29 expected assists per90, meaning he has managed to get into great positions but finishing from teammates may have let him down at times. His key passes are also integral to Leeds, as he currently registers 2.5 per90, registering more key passes than the likes of Sadio Mane and Harry Kane.

Raphinha’s xG and xA per 90, which indicates that he has been getting into good goalscoring positions, and has been serving up quality chances for his teammates – both of which should mean that he is able to keep these numbers up as the season progresses. Again, his xG and xA per 90 stats are remarkably similar – 0.26 xG/90 and 0.24 xA/90, and while he has been outperforming both in terms of actual goals and assists, the outperformance is not by too much, which is an encouraging sign and signals that we should expect the Brazilian to continue scoring and assisting at a decent rate.

Many of his chances created come from set-piece deliveries. Raphinha possesses great vision and has a wand of a left foot that enables the execution of the delivery.

Rennes decision to sell Raphinha may probably be a question left unsolved for years, as fans and player phantom over the verdict to sell the player for less than what they had paid for him a season ago, despite playing very well in his debut season. But Leeds will not care whatsoever, as they have managed to pull off a coup, having themselves their very own silky winger capable of the unpredictable and ability to take the game by the scruff of the neck.

The winger is blessed with pace, flair and also proves to be a very intelligent player for one of the more demanding coaches in the Premier League, add in his immense work rate and positive behaviour, Raphinha’s ceiling is high, and few would doubt him to reach it.

Along with unparalleled abilities and skills in his disposal, Raphinha is also adapted to play the demanding style of high-pressing football required by Bielsa, constantly running his socks off for the team.

Raphinha has been a bit of a journeyman himself with Barcelona already being the 6th professional club he has signed for at a relatively young age at 25.

Perhaps what is more astonishing about the winger, is that he hasn’t been called up to the national team set up before, not even for the youth teams. There may be a suffice of talented attacking players in their disposal with the likes of Neymar and Vinicius Junior, but Raphinha more than holds his own against the elites and should be given a chance to prove his worth with the national team. Perhaps performances this season would have alerted a few coaches to it.

The Leeds’ style of play under Bielsa was extremely demanding, both on a physical and mental level and it is something very similar to what Xavi deploys at Barcelona. Players need to make the right decision at every given time, with the failure to do so means that they are often on the receiving end of counter-attacks. Leeds have been one of the most defensively active sides in the league, topping the charts for PPDA as well as challenge intensity, and this means that every player needs to contribute when out of possession as well. Raphinha is no exception, and he has been an effective presser off the ball, with his energy being vital to Leeds’ attempts to regain possession quickly after they lose it.

Raphinha has been a pretty shrewd addition to Chelsea’s squad this season, adding a touch of flair to the team. The 25-year-old has had an excellent couple of seasons in the Premier League, and had already played a large part in Leeds’ performances. It will be extremely fascinating to see how he progresses at Barcelona, but already, we can see how he has slotted in perfectly into the Premier League’s intensity, and you can expect the Brazilian to continue having an impact in the final third for Xavi’s Barcelona as well.