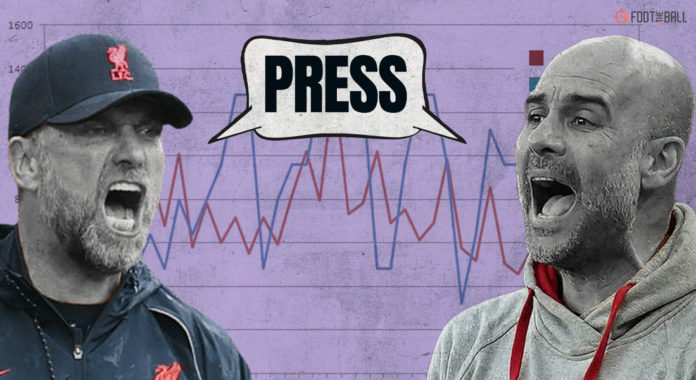 In recent years, pressing has become an integral part of the successful blueprint of teams across Europe.  It has replaced the possession style football based on the ‘Tiki-Taka’ philosophy which dominated the 2010s and is fast becoming the most dominant and preferred style of play in football.

The recent success of Klopp’s Liverpool and the demand for German coaches shows that Gegenpressing is going nowhere as the go-to successful way of playing.

The teams that press, and press high with consistency, play the game in the half of their opponents, a recipe for success. But, how do you measure the success of that pressing? That’s where the data revolution comes into the picture. A defensive metric- PPDA or Passes per Defensive Action is the most accurate metric to assess a team’s pressing.

The growing popularity of pressing systems has in turn has given rise to new stats to understand and analyze pressure. The old metric, opponent pass completion percentage has now been replaced. It has been replaced by PPDA or passes per defensive action.

PPDA = Passes Per Defensive Action. How many passes a team allows the opponent before making a defensive action (tackle, interception, foul) in attacking areas (40% of the pitch away from a team's own goal and forwards)#FRA had a PPDA of 35.2 vs #GER pic.twitter.com/CZBO51UjgB

PPDA in short means opponent passes allowed per defensive action, in the opponent’s defensive 3/5th of the pitch. It signifies the intensity of the press, but not the quality.

PPDA stands for passes per defensive action. It refers to how many passes a team allows the opposition to have from within 40-yards of their goal before they commit to a defensive action such as chasing, tackling, intercepting, etc.

For example, if the PPDA of a team is 13, it means the team allowed the opponent to complete 13 passes without interrupting them by a tackle, challenge, foul or interception (Defensive Actions) on average.

This has become the best indicator of the pressing intensity of a team. The lower the PPDA the more intense the press. A team might be running around aimlessly towards the opponent player with the ball and put in a tackle. The PPDA then will be small but the quality of such pressing will ensure that the team is in no shape to defend against attacks. A simple progressive pass that breaks the defensive lines is then enough to have the ball in a dangerous position.

Since it does not tell us the quality of the press, it is important to realize when analysing pressure the figure itself does not paint the complete picture. It is imperative to see the team’s approach to the game.

How important Is it?

As mentioned above, PPDA is the intensity of the press. One of the reasons it has become such a widely recognized stat is that it is easy to interpret. By reading the PPDA value throughout the game, one can see any changes in the pressing approach of the team.

PPDA- passes allowed per defensive action in oppos. half
OPPDA- amount of passes a team completes in their own half prior to being disrupted by a defensive action. pic.twitter.com/wYwA1Ho19Q

The Premier League is regarded as the toughest and most intense league in the world right now. It is backed up by the PPDA numbers of the top 5 teams in the English top-flight. It’s the lowest compared to the top 5 teams of other European leagues.

The likes of Jurgen Klopp, Pep Guardiola and Thomas Tuchel are major advocates of the pressing game. The PPDA of their teams has almost always been less than 11, which signifies how important it is to take into consideration when understanding pressing systems. It lacks the qualitative side so PPDA should not be taken at face value.

PPDA in the modern game

A low PPDA also does not mean the team would be successful. A perfect example of this is  Leeds, especially under Marcelo Bielsa. El Loco’s team had the lowest PPDA at 9.71, which is due to the highly physical and intense man-marking system Bielsa deploys. Due to the low PPDA or pressing intensity Leeds do tend to give away easy scoring chances. It made them the worst defensive team in the league last season as they survived relegation by the barest of margins!

Klopp’s Liverpool have the second-lowest PPDA in the league at 9.87 but the German’s pressing system seems like a more coherent one. Liverpool have specific zones of pressing and particular opponent players marked as “Pressing Triggers”. Liverpool press with all their might when the ball is in one of those pressing zones, or when their “Pressing Trigger” has the ball. Therefore, they are more often than not successful with their attempt to win the ball back.

Only then can one use it to support or disregard tactical analysis.