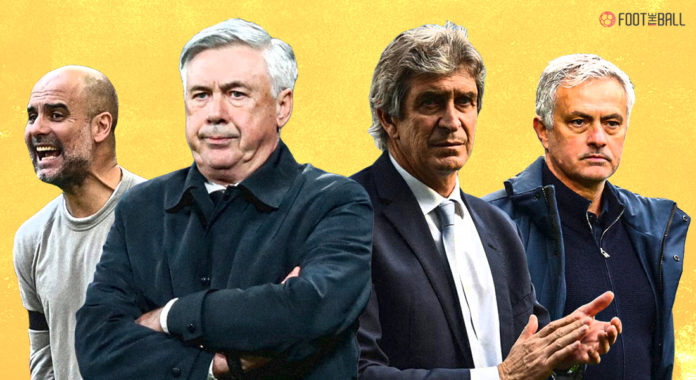 The game of football has come far ahead since its inception. Today it is impossible to imagine a club would survive without having a balance of their own developed players and transfers. For example, Barcelona, whose famed La Masia academy produced so many talents, still splurged an excessive amount of money on Luis Suarez, Neymar, Ousmane Dembele, Phillipe Coutinho, Antoine Griezmann and many more.

Now buying players requires money. Buying good players requires good money, and buying one of the best requires much more money. And in modern football, the transfer fees are only increasing with big clubs spending the most.

This means that some managers who have spent most of their careers at top clubs will have paid a significant amount on transfers. This is because these managers always want the best players most suited to their philosophy. And in the modern game, every position has become necessary. It means investing in every position, which significantly raises the transfer fees for a club.

So, who are the top ten highest spending managers in football?

Well, the first name on the list is not surprising, with current Manchester City coach Pep Guardiola atop the list. The Catalan has spent his entire managerial career at top clubs. Guardiola has signed 50 players in his tenure.

And with the addition of Erling Haaland from Borussia Dortmund and Kalvin Phillips from Leeds, Guardiola’s expenditure on transfer has gone up considerably.

Guardiola has also extended his contract with the club till 2025, so expect that transfer spending to increase considerably.

Well, the ‘Special One’ sits just shy of Guardiola in second place. Jose Mourinho’s significant money-signing era started in 2004 when he took charge at Chelsea. He has brought more than 100 players in his entire career and is set to add more as AS Roma look to improve their squad in the transfer window.

One of the surprising things about his transfers is that Manchester United and Chelsea dominate it. His costliest Real Madrid transfer of the impressive Luka Modric is not even among the top 10 costliest transfers.

The following person on the list is current Real Madrid manager Carlo Ancelotti. The Italian is on a brilliant run of form, helping Real Madrid win a La Liga and Champions League titles. He has also helped players like Vinicius Jr transform into a world-class talent.

It is surprising that all players in his top 10 costliest transfers failed to reach their potential. However, he has still become a top manager who has won league titles in Premier League, Ligue 1, Bundesliga, La Liga, and Serie A, the only manager to do so.

And with the addition of Aurelien Tchouameni, his spending has taken a significant increase.

The top 10 most expensive French signings in football history

And it is safe to say that most of his transfers have gone on to be successful, some of which are still playing today.

The second Italian on the list, Massimiliano Allegri, is currently one of the top managers in football. After Conte’s departure, Allegri kept Juventus’ dominance in Serie A while also taking the Old Lady very close to a Champions League title.

So, it is no surprise that all his top 10 transfers came as Juventus’ manager. Cristiano Ronaldo, Gonzalo Higuain, Paulo Dybala, and Joao Cancelo all joined Juventus under his tenure.

We can do stats all day. https://t.co/0HtJ3utPro

The third Italian on the list, Conte has also spent more than a billion on players during his managerial career till now. The Tottenham manager has already signed forward Richarlison, central midfielder Yves Bissouma, and right-back Djed Spence.

Conte’s major signings came during his stints at Chelsea and Inter Milan. However, he was not always successful, and his players were hit or miss. Ten trophies, including three Serie A and one Premier League title, however, show his brilliant man management.

Age no bar for these footballers. Take a look at the top ten oldest players active in football

The man who led Arsenal to an ‘invincible season’ also finds himself in the top ten spending managers list. This is because the Frenchman spent most of his managerial career at Arsenal. Wenger signed more than 100 players during his career.

However, most of his successful signings came during his initial career when transfer fees were low. And most of his top ten signings failed to justify their price tag.

Diego Simeone has been labelled as a coach that made Atletico Madrid a force on a meagre budget. However, such is the cutthroat competition in modern football that even the Argentinian has to shell out money many times to keep the club on par with top clubs.

However, Simeone has managed to sell some of his top transfers at even better rates to top clubs like in the case of Diego Costa and Antoine Griezmann.

And this has worked as Atletico has won eight trophies, including two La Liga and UEFA Super Cup titles.

Former Barcelona coach Ernesto Valverde also finds himself among football’s top ten highest spending managers. The Spanish saw some of the most significant Barcelona transfers in their history. The problem was that every one of them failed spectacularly, pushing Barcelona to the brink of bankruptcy.

The condition has been so bad that Barcelona had to generate additional economic levers to get a transfer budget. Ousmane Dembele, Phillipe Coutnho, Antoine Griezmann ar4e some of the transfers that took place under his watch.

While Dembele is set to sign a new contract with Barcelona, Coutinho was sold to Aston Villa for a meagre €20 million after an initial loan deal, and Griezmann returned to Atletico Madrid.

While Lisandro Martinez may have gone to Manchester United, Ajax still have one of the best young defenders in Jurrien Timber

Former Chelsea and Leicester City manager Claudio Ranieri is the last among the top ten highest transfer spending managers in football. The fourth Italian on the list, Ranieri has signed 113 players, the most by any manager on the list. And this is the reason he is on the list. His most expensive signing only amounted to €45 million.

Most of his top transfers came as AS Monaco manager in 2013 and Chelsea manager in 2003. However, his most outstanding achievement would come at Leicester City, where he won the Premier League title without any top players.

Ranieri is currently without a club.