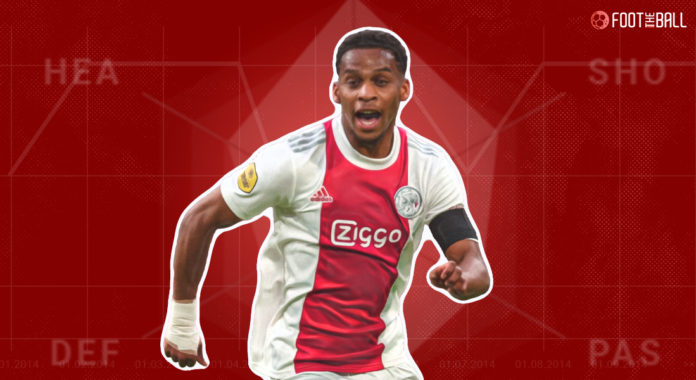 “The Central defender is a position on a football team, one of the two defenders who play in the middle of the pitch”: This is the definition of a centre-back in football. Meanwhile, the Collins English dictionary describes a defender ‘as a player whose main task is to try and stop the other side from scoring. However, modern football would disagree with both these definitions. Today, defending as any position in the game has evolved. It depends on a team’s system whether a defender’s main task is defending or some other role. In teams like Liverpool, who play Gegenpressing, the role of a defender is vastly different from, say, a team like Burnley.

Today defenders are asked to defend, be good on the ball, participate in the attack, be good with their heads, and have a creative vision. This demand of modern football has produced a new crop of players who are far different from the centre-backs of years gone by. And one of the players who fit this bill ideally is Ajax’s Jurrien Timber.

Defending, passing, creating, the kid can do it all. But, no matter how great a team’s defensive options are, they would still want Timber showing his high quality.

Timber’s rise has been in the making for the last three seasons. The Dutchman was promoted to the senior squad after Ajax sold many players. While he played for Jong Ajax, the reserve team in 2019, his performances were enough for Erik Ten Haag to promote him to the senior side.

And he took his chances with both hands. Data analytics site Soccerment rated him as the seventh-best defender in the Eredivisie. In addition, Timber had a 88 per cent pass success, a 58 per cent duel success rate and a 74 per cent dribble success rate. 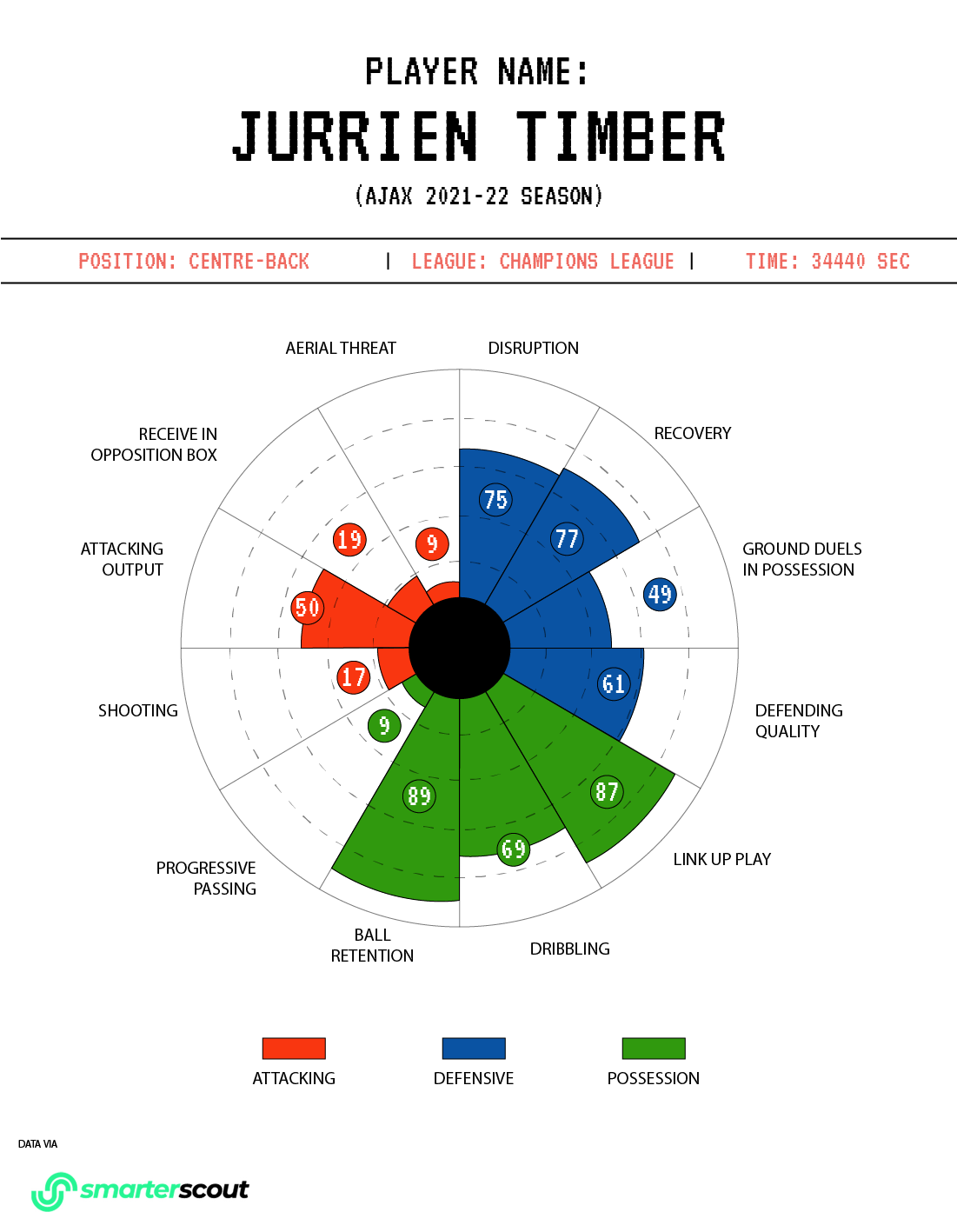 This was impressive for a player in his first senior season. However, his next season would blow all his previous records out of the water.

Timber formed a solid defensive partnership with Lisandro Martinez and helped Ajax win the Eredivisie. Soccerment rated him the best defender in the league, and he has put up the stats to back it up.

Timber racked up the second-most passes in the league behind Daley Blind. And his pass stats are up there with the best. According to fbref, he completed more than 94 per cent of his passes. This puts him in the top one per cent defenders.

However, what makes him dangerous is how good he is at different forms of passing. His long passing completion rate of 94.5 per cent is better than 99 per cent of defenders. This trend of being ranked in the top one per cent continues in passes into the final third (8.02 per 90 minutes), progressive passes (6.45 per 90 minutes), and ground passes (71.12 per 90 minutes). 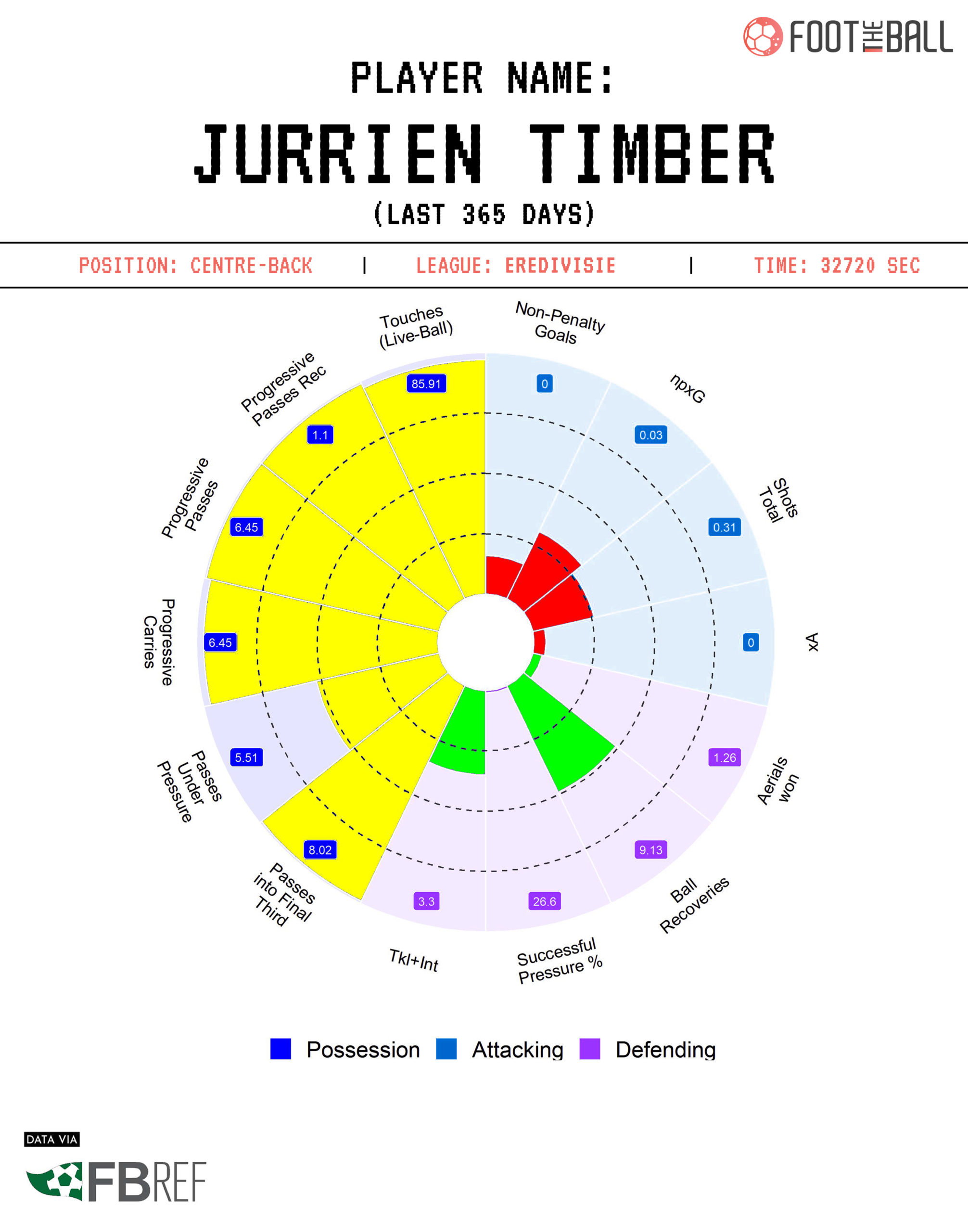 But, what effects do these stats have on his team’s performance? We need to look at the Expected Threat (xT) metric for this. The xT metric measures how dangerous a player is in different parts of the pitch.

The xT is further divided into two parts xT from passes and xT from carries. Again, Timber dominates this metric.

Taking the whole xT metric into account, he is the 11th most threatening player and the third-most threatening defender. His rating for xT from passes is 2.98, the second-best for a defender in the league. This is better than Ryan Garvenberch, Cody Gakpo and Ibrahim Sangare. 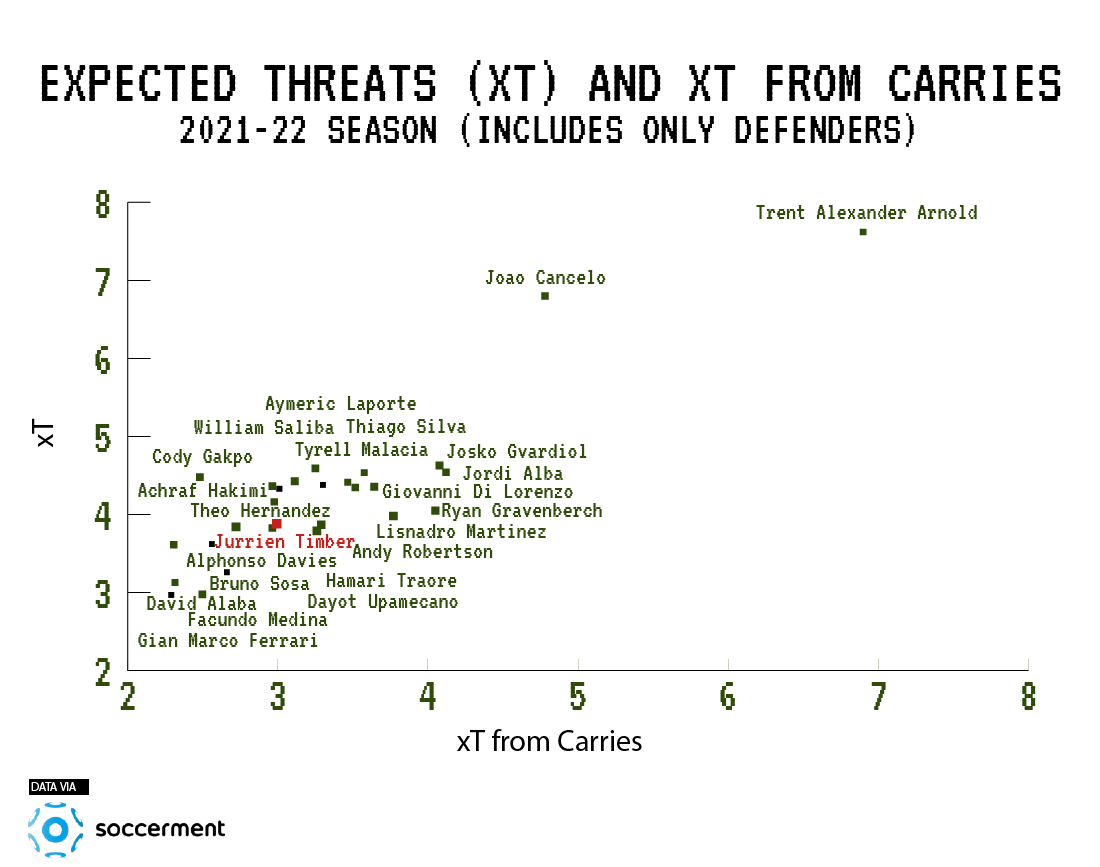 So, he is not just playing simple forward passes but putting incisive balls to carve open the opposition,

But, Timber is not done yet. Just because he is an elite passer doesn’t mean he can’t run with the ball. His xT from carries numbers in the second-best for a defender in the league.

In modern football, almost any defender playing for a top club is a good passer. However, few are as good at carrying the ball. This is where the 21-year-old excels. According to fbref, Timber is among the top one per cent defenders in completing dribbles. It remains the same when it comes to carries (66.56).

Timber also receives 1.1 progressive passes per 90 minutes. This shows that he ventures deep into the opposition’s area to create chances.

Another area where Timber shines is goal creation and shot creation. Fbref data shows he completes 0.16 goal-creating actions (GCA) per 90 minutes through passing, among the top two per cent defenders. This explains why he ranks so high on xT from passes metric. 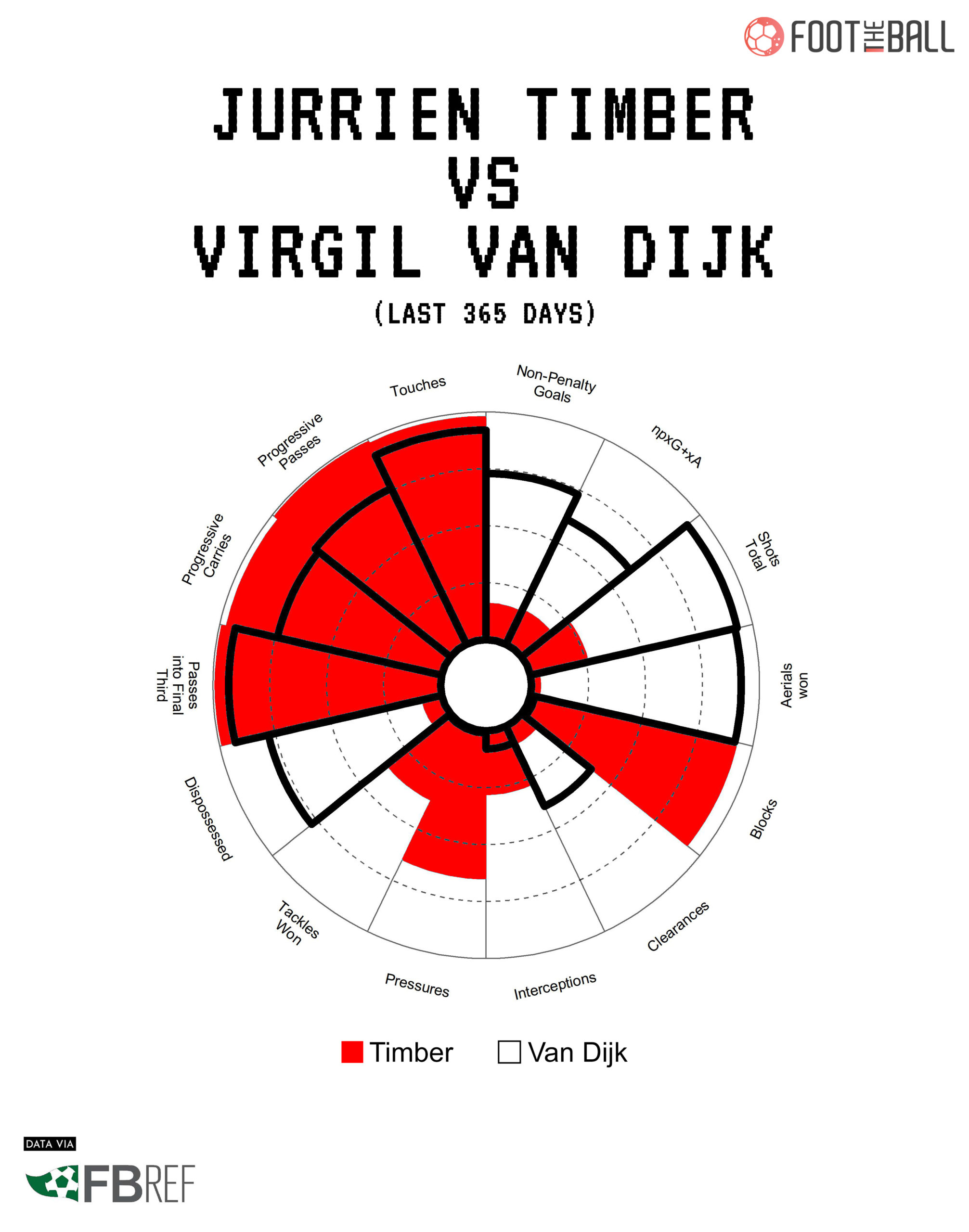 His heat map also shows that he covers a lot of ground. It is most intense between his goal and the opposition’s goal showing how he helps his team in offence and defence. He averages 6.45 progressive carries (top three per cent defenders) and 2.26 carries into the final third (top seven per cent).

Timber has weaknesses that the opposition exploits from time to time: 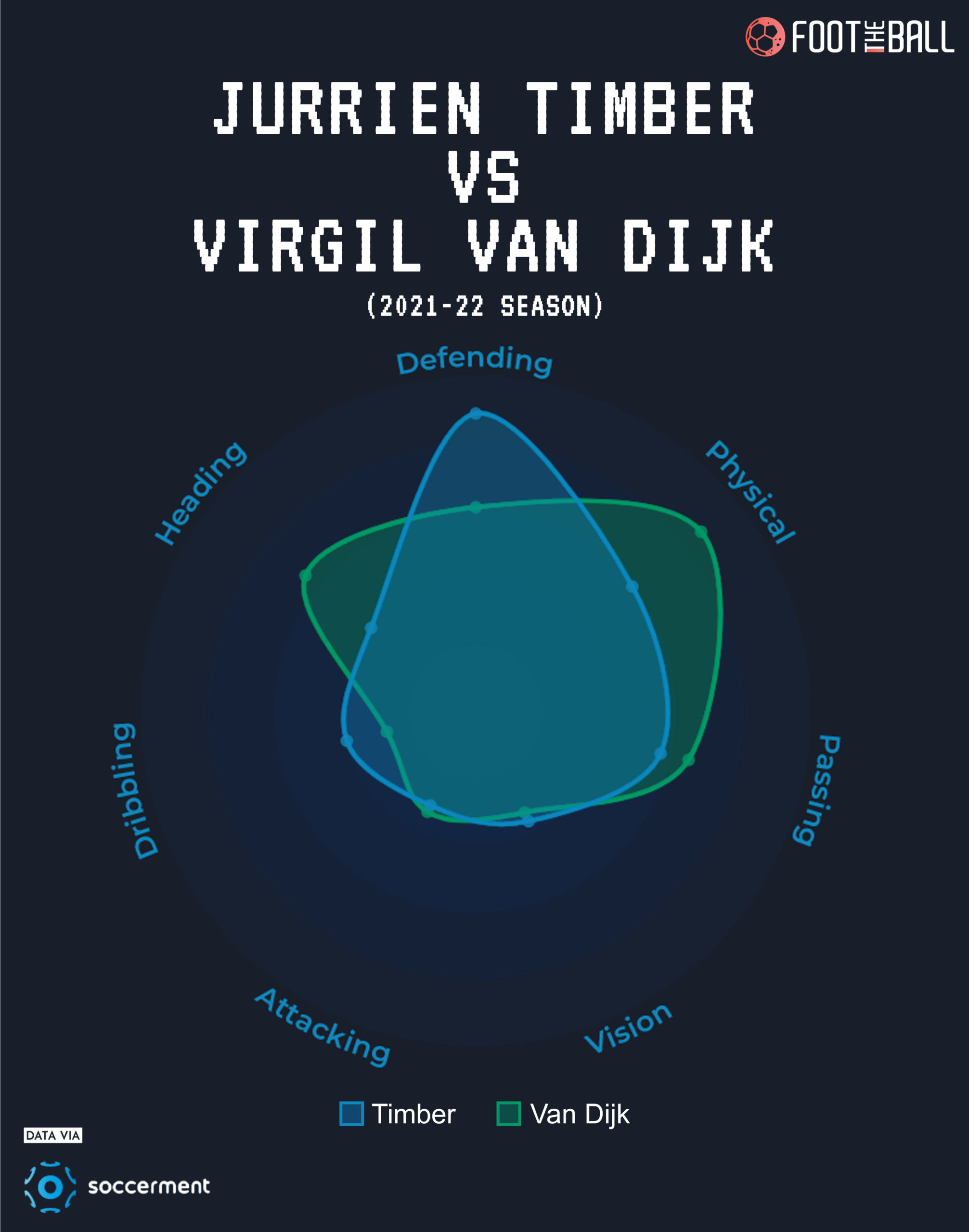 Well, to simply put it, no club in Europe would not want to sign him. He is so good at such a young age. However, Manchester United is the club to which his name has been most linked.

To say that the Red Devils were underwhelming in the last season would be an understatement. Defensively, United had a horror show conceding 57 goals, more than relegated Burnley. Harry Maguire especially had a season to forget.

And the club needs a player who can inspire confidence in the back line like Virgil Van Dijk. Timber is brilliant at the ball and can help his team progress the ball quickly, which United need desperately.

However, Timber is still unsure whether he wants to move this summer. Former Ajax and Manchester United manager Louis van Gaal has warned the player against changing clubs this summer.

The youngsters might also consider Mattias de Light’s struggles after leaving the club. Of course, the decision is his to make, but it is only a matter of time before Jurrien Timber makes that big-money move. But if Ajax manages to retain him for one more season along with Martinez, Edson Alvarez, and Antony, then beware Europe.