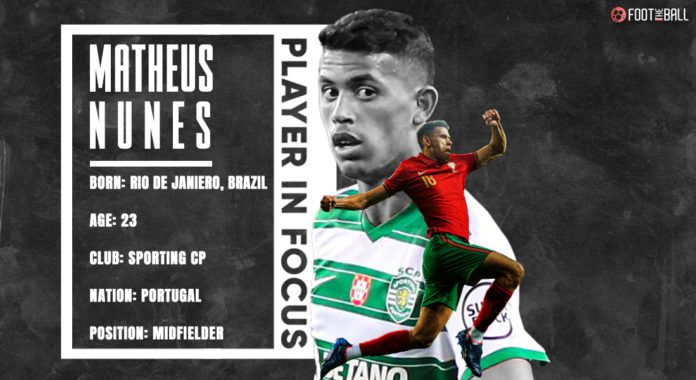 Portugal is fast becoming the go-to destination for big European clubs in search of a transfer. Darwin Nunez joined Liverpool from Benfica, one of the smartest selling clubs on the continent.

Joao Palhinha (Sporting CP) has signed for Fulham, while Vitinha (Porto) has been snapped up by PSG. The next target is Matheus Nunes, also from Sporting CP. The all-round midfielder is drawing attention from a variety of bigwigs, with a transfer on the horizon. Thanks to the Jorge Mendes connection, Nunes is close to a move to Wolverhampton Wanderers (Wolves). If it goes through, it will a huge coup for the PL side.

Liverpool and Chelsea were said to be the frontrunners at one point. Nunes is a great talent, who will instantly improve almost all the teams in Europe right now.

Matheus Nunes loves dribbling. This is one thing that everyone agrees on. No matter where he is on the pitch, Nunes loves to run with the ball. He can get out of a sticky situation quickly, play short passes with teammates before carrying the ball, or just bursting past markers with pace.

Therefore, it is no surprise that the top clubs are interested. A midfielder who is press resistant, and able to break defensive lines with progressive passes is worth his weight in gold. Nunes has also benefitted massively by being under the tutelage of Ruben Amorim. A former midfielder himself, Amorim is one of the best young coaches in world football right now.

He led Sporting CP to the title in 2021, and his tactics of playing fast and occupying the spaces through the middle has helped a lot. Nunes is entrusted with the responsibility of breaking up attacks as well. Moreover, the fact that Sporting play in a fluid manner, means he can play in a number of central options.

Therefore, any team that buys him will have a great versatile option. Nunes’ low centre of gravity makes it difficult for opponents to tackle him to the ground. Sporting have experienced a rejuvenation under Amorim, and Nunes was one of the key pieces.

A number of impressive things in here, including the highly rated dribbling rate. According to FBref, Nunes completes 3.19 dribbles per 90, placing him in the 99th percentile of players in 2021-22.

No big surprise here, given his affinity to carry the upfield and ability to stay on his feet. Nunes also applied 22.68 pressures per 90, good enough for the 82nd percentile.

Sporting are a team who love to win the ball high up the pitch through gegenpressing, meaning every player’s role is crucial. In terms of goal contributions, he had three goals and three assists across all competitions.

Pedro Goncalves is Bruno Fernandes’ heir at Sporting, and is due a big move soon

That’s not a bad return for a player whose main job is to be the link between attack and defence. Nunes is also more than a decent passer and dueler.

According to Soccerment, the 23-year-old had a pass success ratio of 86% and won 55.4% of his duels in 2021-22. Nunes will be a major acquisition for any team looking to bring in fresh energy or aiming to overrun opponents quickly.

Portugal are making a habit of producing top-quality midfielders once again. Bruno Fernandes, Vitinha, Bernardo Silva, and Matheus Nunes are among the most well-known names. The Sporting CP midfielder is a ball magnet, who is equally good at sniffing out danger.

There is plenty to like about Nunes, including his tenacity in winning the ball back quickly. He is not great at winning aerial battles, so most of his work is done on the ground. Moreover, Nunes attempts only 35-50 passes every match, a mark which definitely has to increase in a top-five league.

Opponents often foul him in order to win the ball back, and he won 70 free kicks in 2021-22. Suitors have to be wary of expecting too much offensive spark from him.

Therefore, Nunes would not play well in a congested midfield with other players of his ilk. It is best to pair him up at the base of the midfield pivot, and not as the sole defensive cover. Due to his elite dribbling and passing skills, he could also work well as a “Mezzala“.

Chelsea were being linked to a move for Mathues Nunes. The Blues are rebuilding their team under Todd Boehly, but the expected transfers have not materialized yet. The defence needs major reworking and the Frenkie de Jong transfer saga is unending.

However, the power of Jorge Mendes has again come to the fore in Nunes’ transfer news.

Liverpool were also interested, but the transfer would depend on Liverpool being able to finance the move. Liverpool don’t traditionally spend recklessly and they’ve already spent big on Nunez this window. Reportedly, Matheus Nunes kept Wolves waiting as he hopes for Liverpool to make a move. Now, however, Nunes is close to sealing a £38 million move to Wolves. Along with Ruben Neves, he would make the Wolves midfield arguably top-6 in the league.

The Mendes sword is double-edged for Wolves, but he could be landing them one of the brightest stars in football this time.