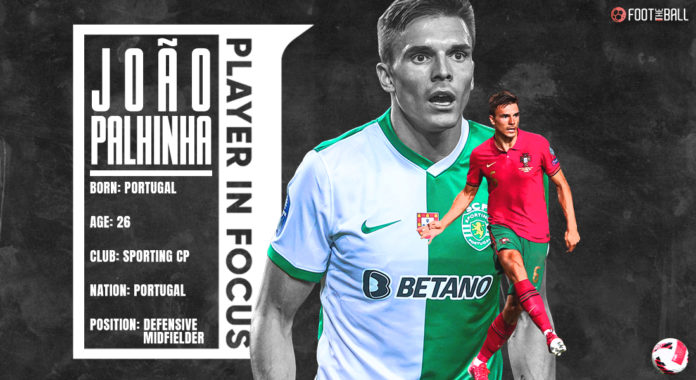 It could very well be the summer of Portugal in the football transfer window. The domestic league known as the Primeira Liga has been supplying talented youngsters for many years. And the trend has continued this year. It all started six months back as Porto’s superstar Luis Diaz made his move to Liverpool. He has been followed by Darwin Nunez, who has also moved to Liverpool. Others to venture out of the league are Fabio Vieira, who signed for Arsenal. Recently, Vitinha signed for PSG.

However, the Primeira Liga juggernaut refuses to stop, with Palhinha being the latest player to move out. Though much older than other targets from the Portuguese league, the player is colossal in the midfield.

In his first season, Palhinha helped Sporting win the league, their first title in 20 years. And they were the only team that went neck-to-neck with Porto in the current season though they failed to beat them. The player became the heart of the midfield after spending two seasons on loan at SC Braga. And his imperious season caught the eyes of Fulham. After winning the Championship, the club was promoted to the Premier League and were looking to improve the squad’s quality. With Joao Palhinha’s signing, they have started brilliantly.

Palhinha, in the truest sense, is a typical number six. His main job is to protect the backline, meaning he must do what one calls the dirty work. Palhinha acts as a shield for the defenders, allowing his midfield compatriots to contribute to the attack.

His role means that his football is not beautiful to the eyes. In Ruben Amorim’s system, Palhinha is also asked to curb his attacking instincts in the team’s interests. However, his defensive acumen compensates for his lack of attacking capabilities.

His 190 cm frame also helps him hold off players and keep possession of the ball. This ensures that it is hard for rivals to dispossess him. Add to this his brilliant tackling, interceptions and blocking skills, and we have a menace.

João Palhinha isn’t the most exciting or sexy player on this Sporting team, not by a long shot, but he’s so important for the style Rúben Amorim wants to execute. You need players like him to break up opposition attacks, organize the build-up, and launch attacking transitions.

However, Palhinha has got more tricks in his bag. He is adept at initiating pressures to win the ball back. Since he is not the team’s fastest player, the midfielder must rely more on his mind to read the game. This is where his elite positional skills come into play. In the 2020-21 title-winning season, Palhinha used to do all the defensive work alone as teammate Matheus Nunes was involved in the attack.

This is where Palhinha uses his intelligence and game reading to ensure that he covers a large area and keeps the opposition’s attack in check.

The next Roy Keane? Manchester United are crying out loud for a number 6, and Edson Alvarez could be that man

Due to the nature of his role, Palhinha is usually not the best player in stats. However, to find his actual value, we need a deeper look. In the title-winning season, Palhinha was a tackling monster, winning 67 of them, the most in the league. His numbers have dropped this season, but he remains the fourth-best tackler in the league.

Ruben Neves vs Julian Weigl vs Joao Palhinha in a few metrics.

All stats from Wyscout and per 90.#wwfc pic.twitter.com/9hUWiKvr9R

Remember, we talked about how he is hard to dispossess due to his physical stature. So, the most effective way to stop him is to tackle him. And that’s what teams do. Fbref data shows that he is fouled 2.87 times per 90 minutes which puts him in the top 98 percentile. This means that he does help his team in the offence, just in a different way.

We have also talked about how Amorim demands that he more often plays it safe for the team. What if he doesn’t play it safe and goes full force? Well, the answer lies in the 2019-20 season. Palhinha was then playing at Braga on loan. He won 244 duels in the Primeira Liga, second only to Otavio.

ANYBODY NEED A CREATIVE MIDFIELDER? Turkish club Fenerbahce has the answer in the form of Arda Guler, the baller dominating at the age of 17

Palhinha is a brilliant case of how a player adjusts his playing style according to the system he plays in. At Braga, he was this no-nonsense defender, a role he has taken up at Sporting but with several changes.

This also means that he does not get to show his full potential in areas that the system does not encourage. He is a limited player, no doubt, but not as minted as the stats show him. And if he manages to improve his passing and build-up play, he can transform any team’s defence and midfield.

He is also a player that any manager would rely heavily on in a counter-attacking situation. His impact has been such that even though he played for a limited time under Amorin at Braga in 2019-20, his impression was such that the manager gave him a chance in Sporting’s team at the very first opportunity.

While the other stars from the league are in the news, Palhinha’s transfer news has gone under the radar. However, it is hard to believe that a player of his capability has gone unnoticed by the big clubs. And Fulham have landed a major coup by signing him.

According to media reports, Fulham are ready to offer a £17 million fee for the Portuguese international, which has been accepted. However, the player’s medical was postponed due to a legal issue which has now been rectified.

He will undergo medical before the deal is officially announced in the coming days. Marco Silva has redeemed himself after his disastrous reign at Everton. He has now a brilliant player that will help his team.

Palhinha will fly to England in the next hours to undergo medicals and sign contract, @pedromsepulveda confirms ⤵️🤝 https://t.co/RtCAMff5er

In the last six seasons, Fulham have won the Championship three times to win promotion to the Premier League. However, on all three occasions, they were relegated straight back. If Marco Silva wants to change that, then new signings are needed at Craven Cottage, and with the signing of Palhinha, the club has taken a step in the right direction.