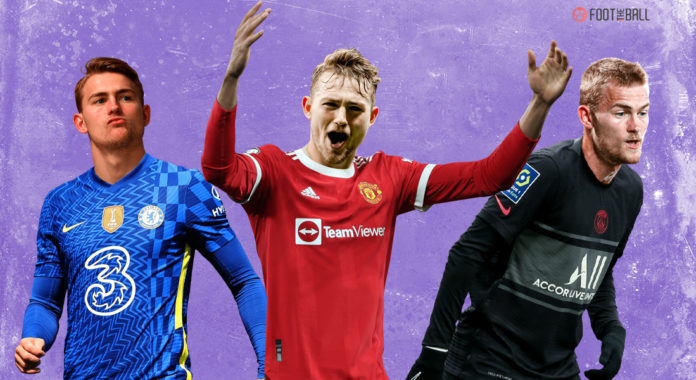 “It’s impossible to keep players when they want to leave the club-but all three parties in the negotiations have to be satisfied”. With these words, Juventus CEO Maurizio Arrivabene shocked the transfer market. In his opinion, Matthijs de Ligt, signed with much fanfare from Ajax in 2019, wanted to move away. However, the Dutch defender earmarked to be one of the top defenders of his generation has struggled to cement his spot in Turin.

The 22-year-old has made 87 appearances across three seasons at the club. And barring the current season, he has also struggled for minutes on the pitch. The Old Lady have struggled for the last two season finishing fourth both times. Andrea Pirlo suffered big time in his first major managerial stint, prompting Massimiliano Allegri’s return.

However, the team failed to win Scudetto as Inter Milan, and AC Milan won a league title. Juventus have also signed Paul Pogba, and with the club still recovering from the effects of a pandemic, De Ligt’s sale will bring up much-needed cash.

But, where will the youngsters go? Which clubs are among the frontrunners for the Cuthman? And where could he be more successful?

FootTheBall looks at the five best landing spots for Matthijs de Ligt if he leaves Turin.

Perhaps the club to go the most distance for signing him is Chelsea. The Blues, under a new owner, are looking to sign players left, right and centre. Antonio Rudiger has already left for Real Madrid, leaving a gaping hole in the defence.

Right now, the club requires a player with a calm head who is brilliant on the ball. De Ligt fits the bill perfectly. He is also a good presser, and playing at Juventus has sharpened his defensive game.

If Chelsea got Matthijs de Ligt, they really would be building an extremely impressive core of young leaders.

All have captaincy qualities.

The new owner Todd Boehly has made it clear that the club will do everything to compete with the best. Media reports have indicated that the two clubs are already in contact. If Chelsea get De Ligt, Raphinha, and Raheem Sterling, Thomas Tuchel’s men will be serious contenders next season.

While Chelsea are the touted destination for De Ligt, Manchester United could be the club where he could feel the most at ease. It was Erik Ten Hag who developed De Ligt into the defender that he is. Playing in Ajax’s fluid system, De Ligt was a complete baller.

And it could be Ten Hag who could transform him back to his old form. Manchester United were woeful in defence in the last season. As a result, the Red Devils were carved open by the opposition’s attack multiple times last season.

Erik Ten Hag might actually bring these three greats back together for Manchester United next season. #mufc

Ten Hag’s system also encourages ball-playing defenders, which the current United defenders are not good at.De Ligt’s signing would also mean that the club will have a defensive leader in their ranks for a decade.

United could also go in for Ajax defender Jurrien Timber or Lisandro Martinez.

FC Bayern Munich had an underwhelming where they did manage to win the Bundesliga but crashed out in Europe. Their defeat in the Champions League game against Unai Emery’s well-drilled Villareal side. And the club has gone on to sign Ryan Gravenberch, Noussair Mazraoui and Sadio Mane to boost their squad.

However, they could use the signing of De Ligt too. Niklas Sule has already left the club on a free. While the club has a star centre-back pairing of Lucas Hernandez and Dayot Upamecano, an injury to any of the two can leave Bayern exposed.

Signing De Ligt will not only improve Bayern’s defensive strength but will also increase competition, raising the players’ standard. Julian Nagelsmann has also tinkered with a three-person defence, and one comprising De Ligt, Upamecano, and Hernandez will surely get fans on their feet.

Manchester United have promised their fans a good transfer window. The man appointed to execute it is John Murtough

Since PSG plays a front three that does not contribute much to the defence, the club requires brilliant defenders who can play their way out of press. De Ligt would also offer PSG a leader at the back.

Reports also suggest that Juventus would like to sign Presnel Kimpembe as a De Ligt replacement. So, a swap deal can’t also be ruled out.

🚨 Juventus are monitoring the situation of Presnel Kimpembe.

👉 In the event that Matthijs De Ligt leaves the team, the Frenchman will begin negotiations with PSG for the defender. #ForzaJuve #PSG pic.twitter.com/n6mQYagu0s

The transfer looks unlikely though after the Mbappe saga. PSG have to balance the books. Club president Nasser Al-Khelaifi said that the club had to move beyond the era of glamorous signings.

However, an exception can be made if a defender of De Ligt’s quality is available.

While the club were on the receiving end of the Mbappe saga, they still had a successful season. The Los Blancos stormed their way to a La Liga title and won the Champions League by defeating Liverpool.

And with Mbappe not arriving, Real Madrid are loaded with cash. As a result, the club can now look in other areas to strengthen. They have already signed Aurelien Tchouameni and are looking to replace the brilliant Luka Modric.

While the club already have Eder Militao, David Alaba, and Antonio Rudiger in their franks, De Light offers them the most. It could be a novelty signing for the club that can pay rich dividends.