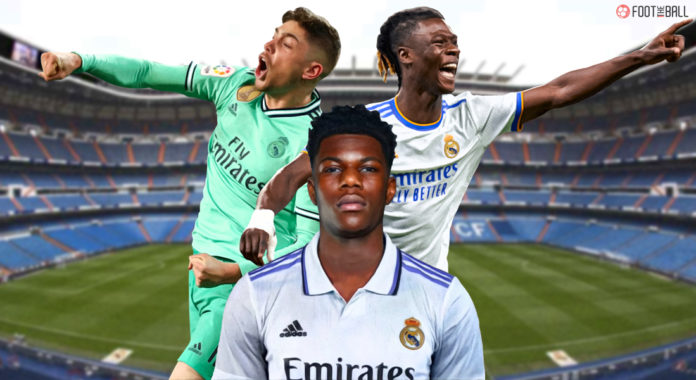 There’s just no stopping Real Madrid! Less than a month after wrapping up a record 14th Champions League title off the back of sterling performances from their young galacticos, Madrid have finalized the signing of another one. Monaco’s wonderkid midfielder Aurelien Tchouameni has decided to sign for Real Madrid in a deal worth €80m plus add-ons to €100m. He will sign a contract till 2027 and will further strengthen Real Madrid’s young brigade.

Have Real Madrid overpaid for the French midfielder? How good is Tchouameni? How does he fit in at Real Madrid? Here we grade the transfer of Aurelien Tchouameni to Real Madrid based on a multitude of factors.

Become an expert on Tchouameni: Read some Aurelien Tchouameni facts you don’t know yet!

Tchouameni is a true defensive midfielder with the ball-playing skill to compliment his defensive acumen. Out of the wide crop of talented young French players, Tchouameni would rank near the top.

Currently, Real Madrid have an undisputed first-choice troika in midfield that has got them to numerous titles. The Casemiro-Kroos-Modric axis is perfect in the way their games fit in seamlessly.

It is because Casemiro works as a pure destroyer just ahead of the centre-backs. His ability to stop opposition attacks through clever interceptions and intelligent fouling has made him one of the best defensive midfielders in the world. That defensive acumen is supplemented by Kroos’ elite ball-playing ability from the center of the park. Luka Modric, the ageless wonder, then takes on the task of linking defence and attack.

Real Madrid spent just €65 million on one of the GREATEST trio’s of all time. pic.twitter.com/dIiIMJYXYU

Tchouameni fits in perfectly with the ‘troika 2.0’ Real Madrid are trying to create. With all three of Kroos, Casemiro and Modric on the wrong side of 30, Madrid have begun succession planning.

Having signed Eduardo Camavinga as the No 6 last year, his game has blossomed in the attacking sense. He is now more of a box-to-box player. Valverde is a willing runner but is more limited in ball-playing than Kroos or Modric. This is where Tchouameni comes in.

He combines Casemiro’s defensive acumen with ball-playing skills to supplement the advanced midfielders ahead of him.

What the above figures show is a solid defensive midfielder who stops attacks with his positioning first and foremost. However, he is not afraid to go in for a tackle if need be. He doesn’t get bullied in the air which would be a big plus for Real Madrid as they currently employ CBs who are weaker than average in the air.

Not only is Tchouameni one of the best young defenders in the world from midfield, he's also one of the best in possession. Streets ahead of any other DM that will move this summer pic.twitter.com/9j3qxWGRbw

Also read: What are ‘Progressive Passes’ in football data analytics?

However, that’s not enough. Tchouameni perfectly replicates Casemiro’s qualities but at his best, he can be an upgrade on him. He is more comfortable on the ball than the Brazilian. Tchouameni has the ability to play line-breaking passes from deep, something Toni Kroos drops deep for right now.

Playing 5.66 progressive passes/90 puts him in the 87th percentile of players across Europe. So, he’s not a pure defensive destroyer. Like Camavinga, he can carry the ball from deep, or split opposition defensive lines with killer passes.

Real Madrid have reportedly closed the deal for 80m plus add-ons to €100m. That might seem like overpaying for a 22-year-old with only 2 seasons of proper first-team football (He made 28 appearances over three season before 2020-21). However, if Real Madrid’s current strategy is anything to go by, it is a very well-thought-out spend.

Real Madrid have pivoted their strategy after some expensive failures in recent times. No longer do they try to get their hands on the new trendy player on the market, like James Rodriguez or Eden Hazard. Instead, they prefer to hedge their bets on some fairly large overlays on young players panning out.

The likes of Rodrygo, Vinicius Jr, Valverde and Camavinga are all valued at a higher price than when they joined the club. Their fees at the time looked like Real Madrid got fleeced. However, the long-term play by the club has paid off many times over.

Real targeting the next Neymar- Who is Endrick Felipe, 15-year-old Brazilian lighting up Brazilian football

Aurelien Tchouameni would hope to join this list of ‘Young Galacticos’ by the end of next season. If he does, Real Madrid would look like forward-thinkers again in a world where clubs rush to find the shiny new toy in the market to splurge at.

Tchouameni is unlikely to be a starter for Real Madrid from day one. Casemiro, Kroos and Modric are still dominating at the top level. Behind them, the likes of Valverde and Camavinga have cemented their places with a series of top displays, especially in the Champions League this season.

Aurelien Tchouameni should look to follow Camavinga’s blueprint for success at Real Madrid. Camavinga made a total of 35 appearances in La Liga and UCL but most of them were cameos off the bench. He played only about 40% of all minutes. However, the impact he had in those limited minutes was game-changing. Especially in UCL, he came off to turn the games against Man City and PSG in his team’s favour.

How do they do it?!- Here we try to decode the Real Madrid Champions League magic

Camavinga has endeared himself to everyone at Real Madrid with his committed and energetic displays this season. If Tchouameni can take his limited opportunities with both hands next season, then his and Real Madrid’s hopes of a smooth succession planning will be fulfilled.

Madrid are also targeting Lovro Majer, dubbed Luka Modric’s heir apparent. If things fall into place, their midfield troika 2.0 could have Tchouameni in the Casemiro role, Lovro Majer in the Modric role, and Camavinga as the more dynamic version of Toni Kroos. Not a bad plan to have, especially with the malleable skillset of Federico Valverde to support them, as he can ably play in a variety of positions.